A recent inspection near the Steveston end of the West Dyke Trail uncovered a network of beaver tunnels and burrows, leading to restoration work along the popular walking path.
0
Apr 17, 2019 4:17 PM By: Alyse Kotyk

A recent inspection near the Steveston end of the West Dyke Trail uncovered a network of beaver tunnels and burrows, leading to restoration work along the popular walking path.

According to City of Richmond spokesperson Ted Townsend, when the pond was drained as part of invasive species management, a problem area approximately 200 metres long was uncovered. 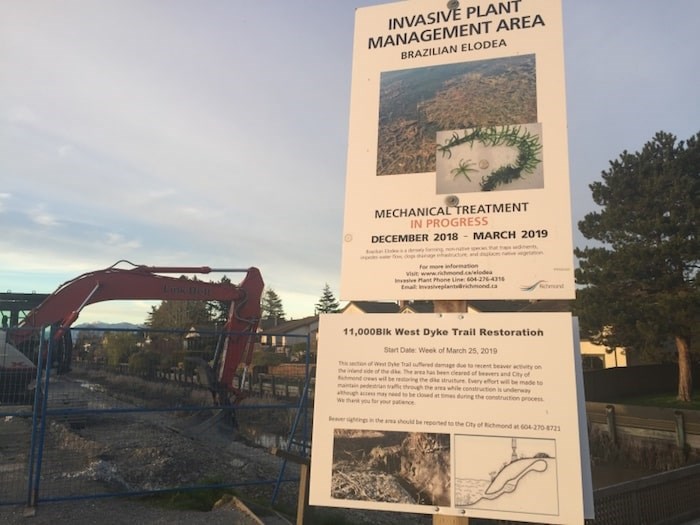 Beaver tunnels and burrows were discovered during an inspection near the West Dyke Trail. Photo by Eve Edmonds

“The draining of Mariners Village pond revealed 19 areas where beavers had dug tunnels and burrows into the dike that were unobservable while the water was in the pond,” Townsend told the Richmond News by email.

“These large cavities may cause stability issues to the dike structure so ground stabilization to reinforce and protect the dike in this location is required.”

After the pond was drained, the beavers left the area on their own and repairs began on the trail at the end of March. The city expects these repairs to take around four to six weeks.

The invasive species, Brazilian elodea, has been a problem in the area since approximately 2014.

The city has tried various ways of slowing the plant, which is believed to have spread after a person dumped a tropical aquarium into the pond. In 2018, staff drained a 210 metre portion of the linear waterway and exposed the plants to freezing temperatures.

Survey results suggest this draining reduced the infestation by around 85 per cent, Townsend said, adding that there has been a “healthy resurgence of native vegetation such as rushes and sedges in the trial area as a result of the soil turning efforts that has enhanced the avian habitat available for nesting and foraging.”

This past winter, the city drained the entire pond for the first time, which revealed the beavers’ activities.

The city has received $222,500 from the province to handle the Brazilian elodea infestation — one of only two known to exist in the province. Such problems are managed by a program called the Early Detection Rapid Response. The city maintains its Invasive Species Action Plan.

Townsend said the city is continuing to work with the province and Mariners Village residents to manage and hopefully eradicate the invasive species.

With files from Graeme Wood