As Vancouver changes, so does bird behaviour in the city

As much as human city dwellers have a different way of life from their rural counterparts, birds’ behaviour has changed as cities have grown around them.
Jun 14, 2019 1:30 AM By: Jessica Kerr

Some soar high above the city, while others stay a little bit more down to earth, but there is no shortage of feathered friends flying around Vancouver.

There are more than 250 species of birds that can be found in Vancouver — some are long-term residents, and others just stop by on their way to another destination. Arguably the city’s most popular resident bird is Anna’s hummingbird — voted the city’s Official Bird in 2017, beating out the varied thrush, northern flicker and spotted towhee. 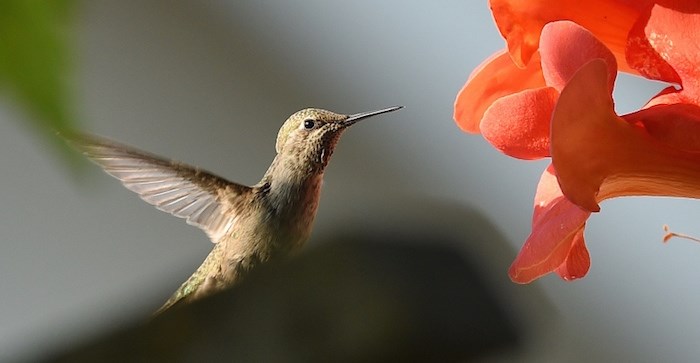 The city’s official bird, the Anna’s hummingbird, is a relative newcomer to Vancouver. Fifty years ago, they were nowhere to be found in British Columbia. Photo by Dan Toulgoet/Vancouver Courier

Now a year-round resident, Anna’s hummingbird is a relative newcomer to Vancouver.

Human activity drew hummingbirds north up the coast, with reports of them as far north as south eastern Alaska.

“Those changes have put a lot more hummingbird food out in the environment and hummingbirds have capitalized on that and have moved in.”

As much as human city dwellers have a different way of life from their rural counterparts, birds’ behaviour has changed as cities have grown around them.

“They absolutely behave differently to take advantage of what’s available in the city,” Freeman said. “You see that a lot with things like the seagulls. In the city, they eat trash and they’ll nest on rooftops and they’re really kind of a city bird that eats food scraps… but in less populated areas they’re ocean birds and they eat fish that they catch in the open water.”

Most birds are quite particular in where they will build a nest, and the birds of Vancouver are no different. While some, such as eagles, herons and crows, take to the trees, others take advantage of the concrete jungle.

Seagulls, which typically nest in open spaces, hunker down on flat rooftops around the city. And the ever-growing number of high rises going up makes for the perfect nesting spot for birds that prefer the nooks and crannies of cliffs.

“One bird that’s very cool that also nests in buildings because they resemble cliffs is the peregrine falcon,” Freeman said. “Before humans came along, they would nest almost exclusively in cliff faces and now they’ll nest in high rise buildings… Before people came along there would be a cliff face and if you had an area with a lot of cliffs you might have a peregrine falcon nesting there and also pigeons, and now we’ve kind of recreated that with high rises.”

The peregrine falcon doesn’t nest in Vancouver, but it does frequent the city throughout the year and was bestowed with Official Bird status in 2016. It is known for its speed and hunting prowess. Freeman said when it’s diving the falcon can reach speeds of up to 200 mile per hour, and it can appear seemingly out of nowhere, snatching up an unsuspecting bird, typically pigeons, which also nest on building ledges, on the ground and in the air.

There are several threats that are unique to birds living in, and flying through, cities.

Those tall buildings that some birds call home can also prove to be deadly obstacles for birds that are just passing through.

High rises with a lot of glass are the worst for migrating birds, many of which typically fly at night.

“The glass is so reflective and birds don’t see it at night and they just fly full speed into it,” Freeman said, adding that resident birds know where all the buildings are and are unlikely to fly into them.

Another threat is the ubiquitous house cat.

“There tends to be lots of cats roaming around that people keep as pets but let outside, and cats invariably kills lots of birds every year,” Freeman said.

The city has made an effort to make Vancouver more bird friendly. In 2015, council adopted a bird strategy, which includes bird-friendly design guidelines aimed at making tall buildings more visible to birds.

Freeman says there are ways Vancouverites can make life a little easier for the city’s winged residents.

“I think the number one thing you can do is get to know a couple of the birds,” he said. “I think every person in Vancouver should be able to know the names of, start with fives species of birds in Vancouver, or 10 if you’re feeling a bit more ambitious… If you get to know the hummingbirds or the sparrows or the ducks you see in your neighbourhood or your local pond, then you’ll start to appreciate them.

“What they need is space and to be left alone most of the time, but really what the birds need are advocates for them and you become an advocate when you get to know them.”