West Vancouver resident Venus Yau got a big surprise when she witnessed what she described as a “big, fat cat” slink into her backyard.
0
Feb 8, 2020 2:38 PM By: Ben Bengtson 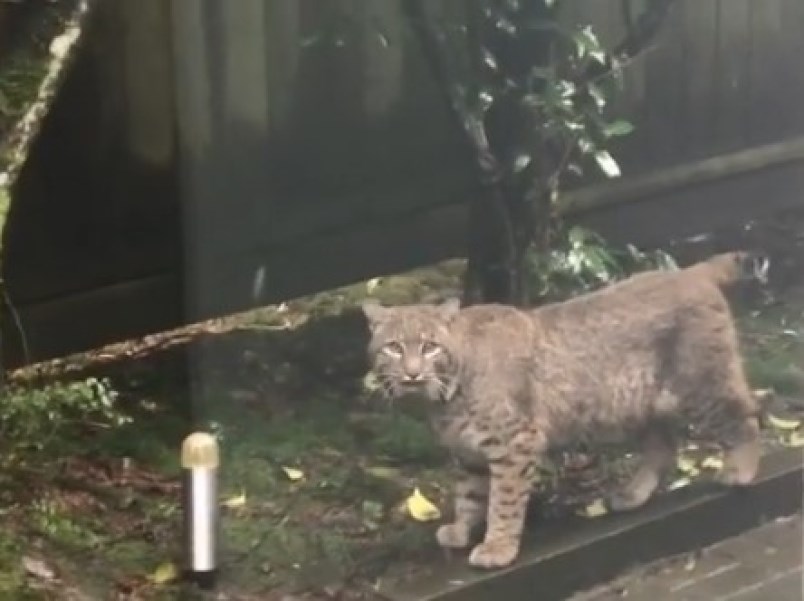 A West Vancouver woman captured video of what appears to be a bobcat roaming outside her Ambleside neighbourhood home Friday morning. Photo: Venus Yau

West Vancouver resident Venus Yau got a big surprise when she witnessed what she described as a “big, fat cat” slink into her backyard Friday morning.

“I just moved to Vancouver from Hong Kong one year ago. I’ve never seen this kind of animal in Hong Kong,” said Yau.

From the safety of her Ambleside neighbourhood home, Yau captured video of the animal as it stared briefly inside her house before turning and leaving.

She had a hunch that it was a wild animal. After picking her kids up from school and showing them the video of the brief wildlife encounter, they informed her that she’d come face to face with a bobcat.

“I just wanted to alert others in the neighbourhood about it,” said Yau. “When I saw the cat I knew that I had to keep a certain distance.”

A spokesman from the Ministry of Environment advised common sense if residents encounter a bobcat in their neighbourhood, including not approaching the animal. If people are unsure what to do following a wildlife encounter, they are encouraged to call the province’s Report All Poachers and Polluters hotline at 1-877-952-7277.

#haystonharrod #bobcatinmybackyard #bobcat #gotcha We made eye contact and she was waving her tail when I was saying hello to her! I hope people can continue to live in harmony with wildlife🤞🏻🤞🏻