Gibsons-based photographer Dolf Vermeulen and his friends were treated to a chance encounter with a bobcat swimming in Narrows Inlet Aug. 20.
0
Aug 30, 2019 5:16 PM By: Sophie Woodrooffe

Gibsons-based photographer Dolf Vermeulen and his friends were treated to a chance encounter with a bobcat swimming in Narrows Inlet Aug. 20.

They were exploring Narrows Inlet in their 14-foot aluminum boat on Aug. 20 when they saw the creature halfway up the inlet, before Tzoonie Narrows. First they thought they spotted a seal, then a log. 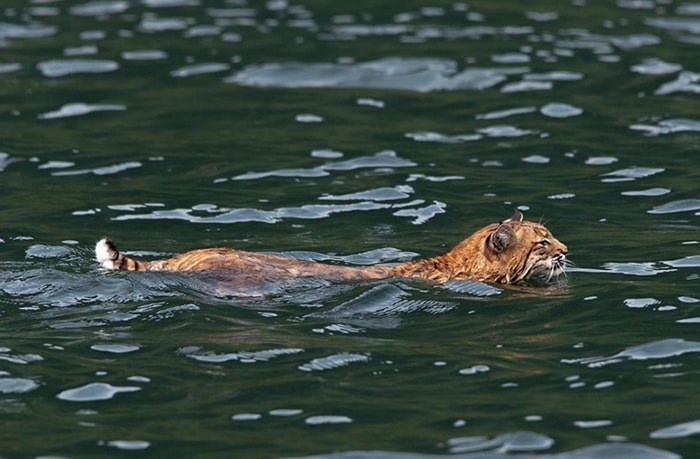 “As we approached closer we said, ‘holy crap’ it’s a bobcat!” which Vermeulen said they were all “very surprised by.”

The group kept the boat about 100 metres from the animal, which was swimming from the north side of the channel to the south, but photographer Vermeulen was able to capture close-up shots thanks to his 600 mm zoom lens.

“It wasn’t the most narrow part of Narrows Inlet,” said Vermeulen, adding that the bobcat appeared quite tired after completing the approximately kilometre-long swim to shore. After a short rest at the water’s edge, it hopped over a ledge close to the shoreline where it stayed out of sight. Half an hour later they spotted it as it made its way up the rocky shore, into the woods and disappeared.

While Vermeulen had spotted a bobcat up a logging road once before, a swimming bobcat was a first for him and his friends.

Conservation Officer Leyland Klassen said the Sunshine Coast is home to a “healthy population” of bobcats, and that while not an everyday occurrence, “it’s not uncommon for cats to be seen swimming.”