Finn and his fellow canines are trained and certified to detect C. diff, a superbug that attacks people whose immune systems are weakened by antibiotics.
0
Nov 8, 2019 12:54 PM By: Jessica Kerr 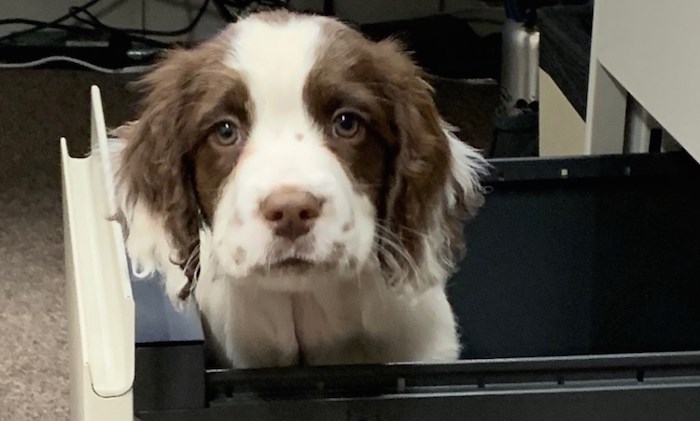 More than 900 people registered a vote for one of four names and Finn came out on top, beating out Olaf, Clouseau and Magnum.

“Not only did people register their choice of name, but many opted to support the program,” said Barbara Grantham, president and CEO of VGH & UBC Hospital Foundation.

“Philanthropic support to VGH & UBC Hospital Foundation has enabled the C. Difficile Canine Scent Detection Program to grow from a pilot project with one dog to an established program with six dogs, two of whom are certified and working in hospitals across Canada.”

Finn and his sister Traveller will be mentored by Angus and Dodger, who are the stars of the program.

The canines are trained and certified to detect Clostridium difficile, which is also known as C. difficile, a superbug that attacks people whose immune systems are weakened by antibiotics.

The bug is an antibiotic-resistant bacterium that can cause symptoms ranging from mild diarrhea to life-threatening colonic inflammations. Although anyone can be affected, the germ is more commonly a problem in people with compromised immune symptoms.

Since 2016, the canine scent detection teams at VCH have searched hundreds of hospital areas for C. difficile. The team has also visited 30 Canadian health care facilities to share their infection prevention expertise.

“Through the C. Difficile Canine Detection Program at Vancouver Coastal Health, dogs such as Finn are helping to keep patients and their families safe and healthy,” health minister Adrian Dix said in a press release.

Traveller and Finn will spend the next several months learning the basic skills and behaviours expected of all service dogs. At about one year old, the pups will begin specialized training to become C. difficile detection dogs.