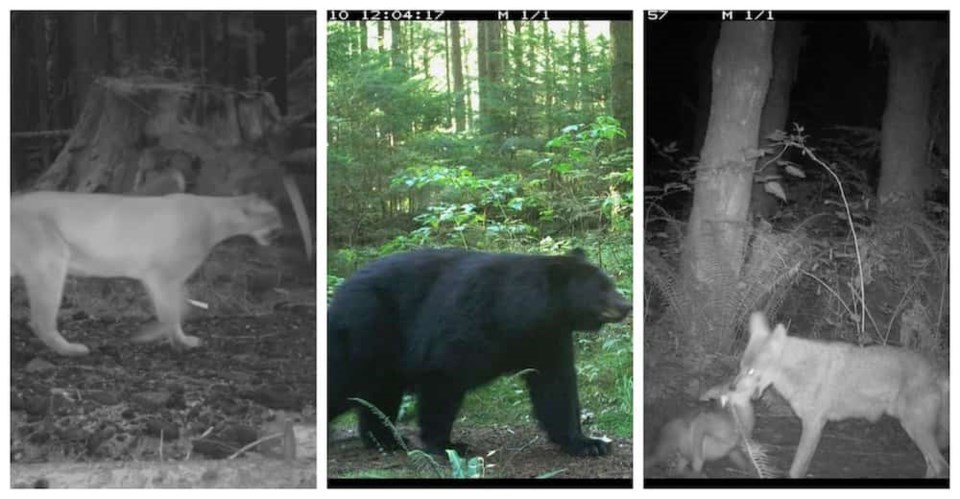 BC Parks closed all provincial parks on April 8 in response to the COVID-19 pandemic - and it seems like some local wildlife may already be responding to the change.

A number of camera traps set in the Golden Ears Provincial Park have captured some amazing footage of wildlife over the past weeks, and a couple of park rangers state that a few animals appear to be more active during the daytime, too.

Shared on April 28 to The Wildlife Coexistence Lab Instagram, camera trap footage shows a family of cougars bounding through the forest.  The caption explains that the video shows a mom and her two (rather large) kittens in Golden Ears Provincial Park, and remarks that these cameras collect critical data on a plethora of amazing species.

Whilst we #StayHome #cameratraps continue to collect critical data on a plethora of amazing species. Check out this super cool cougar Mom and her two (rather large) kittens in Golden Ears Provincial Park, BC where #UBC MSc student Michael Procko (@xprockox) and partners @alouetteparks @yourbcparks are investigating how terrestrial mammals are impacted by recreation and logging. #WildCo #wildlife #goldenears #UBCForestry

The University of British Columbia's Faculty of Forestry Wildlife Coexistence Lab is composed of a group of researchers that focus on human-wildlife coexistence across multiple species and scales, with a particular emphasis on large-bodied terrestrial mammals. The lab is led by Dr. Cole Burton, Assistant Professor in the Department of Forest Resources Management, and Canada Research Chair in Terrestrial Mammal Conservation.

Burton tells Vancouver Is Awesome in a phone call that Michael Procko, a UBC Master's student, is studying wildlife responses to human disturbance in and around protected areas. The camera traps survey how animals respond to human interaction, logging and environmental factors. He says that a number of cameras are set up in Golden Ears Provincial Park and the adjacent lands in order to capture the differences between high-use and low-use areas.

"We started the project last summer," explains Burton. "We started putting the cameras out around May or so."

Burton says that the COVID-19 pandemic has provided the group with an unexpected opportunity to study how the animals respond to less recreation in the park. And while it has only been a couple of weeks since the park was closed to the public, he notes that a couple of park operators report seeing more animals during the day.

"It is still too early to tell how much of an affect it has had," he cautions. "But spring is a good time to observe behaviour."

With that being said, Burton notes that cougars and black bears are aware of human activity, and they are quick to notice changes. As such, he says that these intelligent animals can quickly adapt to new circumstances.

In addition to Golden Ears Provincial Park, Burton says that the group also has cameras in Cathedral Provincial Park and South Chilcotin Mountains Provincial Park. He notes that having cameras in different regions provides more examples of animal behaviour, such as how one species behaves in multiple conditions.

While the cameras capture a number of wildlife, Burton remarks that it isn't always easy to distinguish individual animals. In particular, he says that cougars are harder to distinguish than black bears. However, they are also very secretive, and having 24/7 access to their behaviour is a valuable research tool.

Burton adds that the group has had a number of exciting finds on the footage, such as a rare, spotted skunk in Golden Ears. Half the size of a regular skunk, slender, and covered in white spots, these elusive creatures are truly a sight to behold. Moreover, recording the forest dwellers on film is testament to why long-term projects like these are so important to wildlife preservation in B.C.

Happy Earth Day 🌎🌲Nearly all of my captures of animals in Golden Ears Provincial Park are nighttime shots, evidence that recreational activity may be forcing animals to segregate themselves temporally. The virus has closed all provincial parks in BC, allowing us the opportunity to see if this is true. It’s a horrible virus, and the circumstances are grim, but I’m so glad to be working in a place where we can make something good of it.

Interested in learning more about camera traps and wildlife conservation in B.C.? WildCAM aims to act as a complement to other camera trap networks and initiatives across North America by focusing on western Canada.

No charges for man who took seal pup in B.C.
Aug 1, 2020 4:26 PM
Comments
We welcome your feedback and encourage you to share your thoughts. We ask that you be respectful of others and their points of view, refrain from personal attacks and stay on topic. To learn about our commenting policies and how we moderate, please read our Community Guidelines.