Could Canuck the Crow still be winging his way around Vancouver? A possible sighting over the weekend has Canuck's human best friend focusing on where a "friendly" crow was seen. 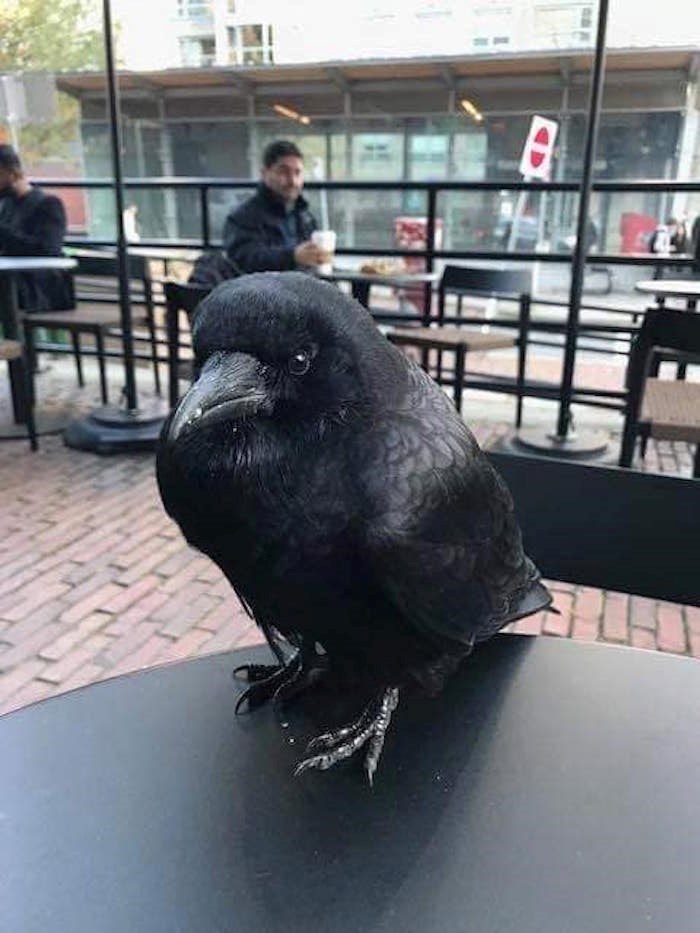 Is this crow our city’s unofficial celebrity mascot, Canuck? Canuck and I/Facebook

Could Canuck the Crow still be winging his way around Vancouver?

The beloved bird, missing since Aug. 30, has been on the minds of his many fans - as has his possible fate. One tipster sent Canuck's "human," Shawn Bergman, photos of a "friendly" crow they encountered Saturday, Oct. 26 in Yaletown, and Bergman has been searching the area diligently since then.

A crow, described as being "'friendly' with people but seemed sedated or seemed as if something was off" was photographed on the patio of the Starbucks on Mainland in Yaletown, across from the Canada Line station.

In the photos, the crow is sitting on one of the coffee shop's patio tables. As Bergman points out: "Keep in mind, Canuck may have had his tags removed. Even though this Crow doesn't have tags, it still may be him."

Bergman has shared a couple of search updates on his Facebook page, Canuck and I, after spending time over the last few days in the area of this location, as well as by Beatty and Robson, another spot where someone says they saw what could be Canuck.

Writes Bergman: "So, after a thorough search I came up empty handed in finding this Crow spotted downtown the other day. I did run into a few people out looking as well, but no Canuck. I will continue the search again today. However if anybody does happen to meet this Crow downtown, please email me at canuckandi@gmail.com"

Since's Canuck's disappearance at the end of August, rumours have swirled about what may have happened to the bird, including one possible hoax posted on Craigslist regarding the discovery of a dead crow bearing two bands. Canuck, indeed, wore two bands on his legs; as of July Canuck sported both a uniquely numbered metal band, supplied by The Federal Bird Banding Office in Ottawa, along with his orange band that makes him visible to his fans.

Fans - including fans outside of Vancouver - have been vigilant about offering prayers and good wishes for the search, searching themselves, or lobbying to have any evidence like CCTV footage of the last place Canuck was seen brought forward.

A $10,000 reward remains in place for the safe return of Canuck the Crow. Tens of thousands of world-wide fans - and Canuck's best buddy Shawn - remain hopeful.