Canuck the Crow has once again garnered international attention. This time the celebrity bird's story has featured in an episode of a famous comedy podcast about murders.
Elisia Seeber Nov 26, 2019 4:18 PM

Canuck the Crow has once again garnered international attention. This time the celebrity bird's story has featured in an episode of a famous comedy podcast about murders. 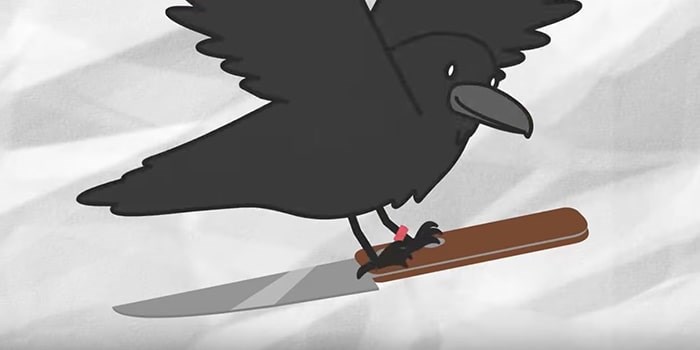 Canuck the Crow is the star of an podcast animation. Photo: Nick Terry

Vancouver’s unofficial winged ambassador has been missing for almost three months now and his disappearance has become quite the “murder mystery.” Canuck hasn’t been seen at his usual East Vancouver hangout spot since Aug. 30 and a $10,000 reward is being offered for the Federally protected crow’s safe return.

A Vancouver fan of the L.A. based podcast ‘My Favorite Murder’ sent the hosts of the show a letter about Canuck’s intriguing story and they read it out in a podcast episode — MFM Minisode 29.

The short segment was later turned into a hilarious animation about Canuck, which was released online Nov. 25. The episode summarizes Canuck’s quick rise to fame, leading with the bird stealing a knife from a crime scene back in 2016. It then goes on to mention his mischievous behaviour, including riding the transit system and taking people’s belongings, before highlighting his disappearance.

Nick Terry, an animator and podcaster, from Seattle, W.A., put the clever video together. He has been creating podcast animations based on the ‘My Favourite Murder’ podcast for the past year, releasing a new animation once a month. He makes the videos with support from the fans of the MFM podcast.

Watch the animation below:

While there have been rumours the bird has died, has been crow-napped, released far from Vancouver or even taken as a pet, fans of the Canuck and I Facebook page believe there’s no evidence to make a final call, just yet.

There was a potential sighting of the celebrity bird in Yaletown in late October, but nothing concrete has been determined as to Canuck’s whereabouts.

Shawn Bergman, who runs the Facebook page and is widely known as the bird’s human best friend, is still “holding out hope” Canuck will find his way home.