A dead cat that was found with a plastic bag over its head in early August likely passed away from natural causes, according to the SPCA.
0
Aug 30, 2018 4:02 PM By: Jeremy Shepherd

A dead cat that was found with a plastic bag over its head in early August likely passed away from natural causes, according to the SPCA. 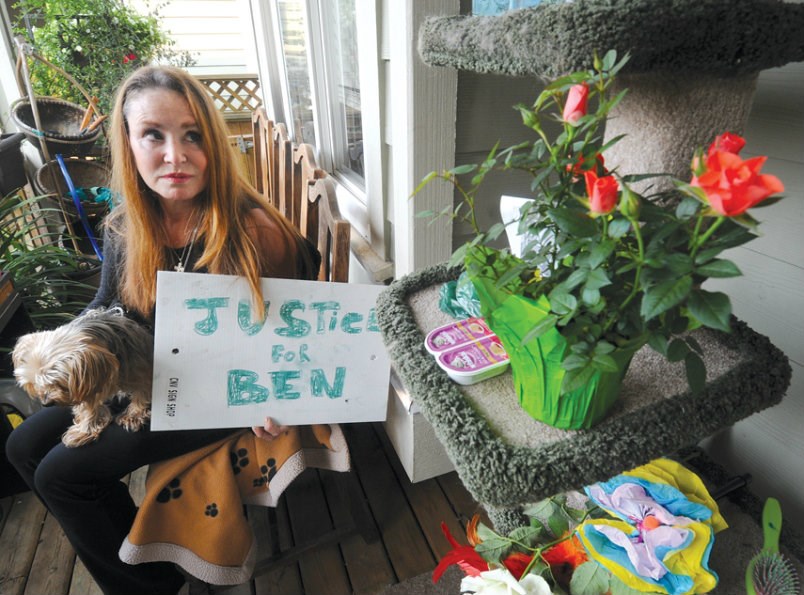 Deborah Stockwell holds her dog, Sacha, while looking at a makeshift shrine for her cat, Ben. Neighbours have been dropping off tributes after Ben was found dead with a sandwich bag on its head in a ravine near Stockwell’s home. The owner believes her pet was the victim of foul play. photo Mike Wakefield, North Shore News

Pet owner Deborah Stockwell said she suspected “out and out cruelty” after finding her Maine coon cat Ben in a ravine off Mahon Park. The cat’s face was bloodied and his head was wrapped in sandwich bag, according to Stockwell. The therapy cat’s forelimbs also seemed deliberately positioned to match the image of Ben in the missing posters Stockwell had displayed throughout the neighbourhood, she added.

While a necropsy didn’t establish the cause of death, the SPCA was able to rule out suffocation as a potential cause, according to senior animal protection officer Eileen Drever.

“It looked like it died from natural causes,” Drever said, noting the animal suffered from bronchial pneumonia.

Drever theorized “some sick person” may have placed the bag over the cat’s head after it was dead. The investigation is now closed.