A black bear that knocked down a man in Coquitlam River Park last week has been euthanized, according to the BC Conservation Officer Service (BCCOS).
0
Jul 22, 2019 3:56 PM By: Diane Strandberg

A black bear that knocked down a man in Coquitlam River Park last week has been euthanized, according to the BC Conservation Officer Service (BCCOS).

Trails to the park, which straddles both Coquitlam and Port Coquitlam, have been reopened after a harrowing few days in which traps were set to catch the bear. But walkers and hikers are still encouraged to carry bear spray, bells or an air horn when recreating in areas frequented by bears. 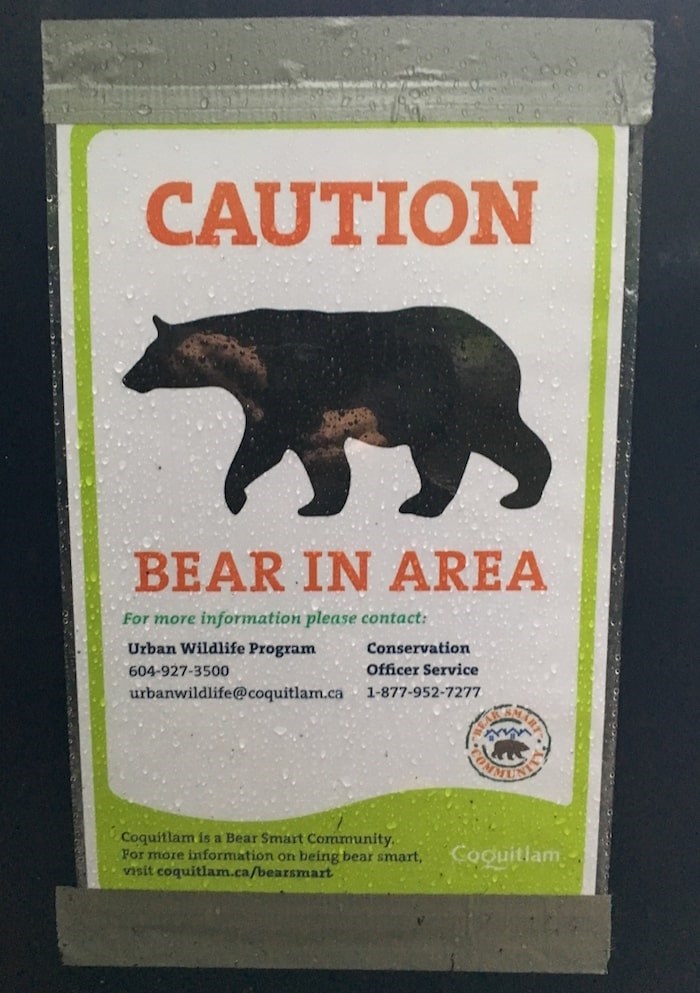 The city of Coquitlam has put up signs following the encounter. Photo by Stefan Labbé/Tri-City News

The warning comes as BCCOS reports officers trapped a bear matching the description of one involved in a July 16 incident when a man who was outside his tent was knocked over by a bear.

The bear had been accessing food at the tent site and the decision was made to kill the bear because it was hanging around during daylight hours in an area of human activity and appeared to be used to the presence of people.

For these reasons, the bear was not a candidate for relocation, according to BCCOS.

Members of the public are warned to secure all attractants to avoid drawing bears into their neighbourhood.

The public is asked to report bear conflicts to the Report All Poachers and Polluters (RAPP) phone line at 1-877-952-7277.

The Tri-Cities have seen a significant jump in bear sightings reported to Wildsafe BC so far this year.

According to data from the organization’s Wildlife Alert Reporting Program, there have been 725 reported bear sightings in Coquitlam, Port Coquitlam and Port Moody to last week, up 31.1% from the 553 in the Tri-Cities last year. Port Moody has seen the biggest spike, rising 137%, while Coquitlam’s numbers have jumped 45.9% and Port Coquitlam's have fallen 25.2%.

Numbers do not necessarily mean there has been an increase in bear activity, however, as one bear can generate a significant number of calls.

Still, bear activity has resulted in concerns at local parks, with Oliver Road to Minnekhada Regional Park recently closed because of bear activity. Park visitors who enter via Quarry Road or who walk into the park are encouraged to stay 100 metres away from bears they see or change their route or plans to avoid them.

And in Mundy Park earlier this month, traps were set, some trails were closed and staff were deployed to the park to remove attractants because of repeated sightings of a female bear and two cubs.