Dairy cows can be optimistic or pessimistic from a young age and their inherent outlook can predict their ability to cope with stress, new research from the University of British Columbia says.
0
Dec 5, 2018 2:53 PM By: The Canadian Press

Dairy cows can be optimistic or pessimistic from a young age and their inherent outlook can predict their ability to cope with stress, new research from the University of British Columbia says. 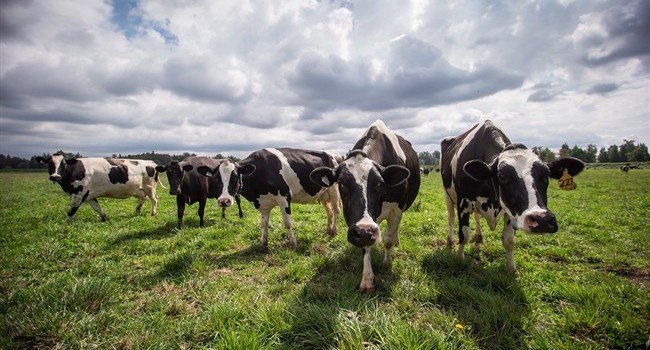 Dairy cows walk in a pasture at Nicomekl Farms, in Surrey, B.C., on Thursday August 30, 2018. New research from the University of British Columbia suggests dairy cows show personality traits like pessimism and optimism from a young age and their inherent outlook can predict their ability to cope with stress.THE CANADIAN PRESS/Darryl Dyck

Benjamin Lecorps, a PhD student in the animal welfare program, said the study has implications for animal welfare and suggests some commonalities between the human and animal worlds.

"In humans, we know that personality traits can really affect how people cope with stress, cope with challenges or even (affect) their social lives and so on. We really wondered if it was applicable to animals as well," Lecorps said.

The study, published last month in Scientific Reports, tested how calves that had previously been identified as fearful, sociable, pessimistic or optimistic reacted under stressful situations like being transported from one barn to another.

The stress tests came four months after their personality traits had been identified through testing when the animals were between 25 and 50 days old.

The more pessimistic calves were more vocal and had higher eye temperatures, which are signs of stress, he said.

Eye temperature increases when an animal feels threaten because the sympathetic nervous system is activated and increases blood flow to the eyes, Lecorps said.

While optimism has been studied as a major predictor of how well humans cope with stressors, with implications for their social lives and mental health, few studies have focused on pessimism and optimism in other species, he said.

Lecorps said personality traits have often been studied as an average across a species or herd, but it's important to look at individuals when considering animal welfare because some calves will be more vulnerable to challenges than others.

The study could be used to help farmers determine which animals will be more resilient and to allow them to improve overall health on a dairy farm, he said.

"If we have animals that are more vulnerable to stress, it's likely that they are going to be more likely to be sick later in life or to not cope at all with the challenging situations they are subjected to in routine dairy farming," Lecorps said.