The ice rescue team arrived and carefully collared the deer, dragging it to shore for assessment.
0
Jan 18, 2020 5:00 PM By: Castanet 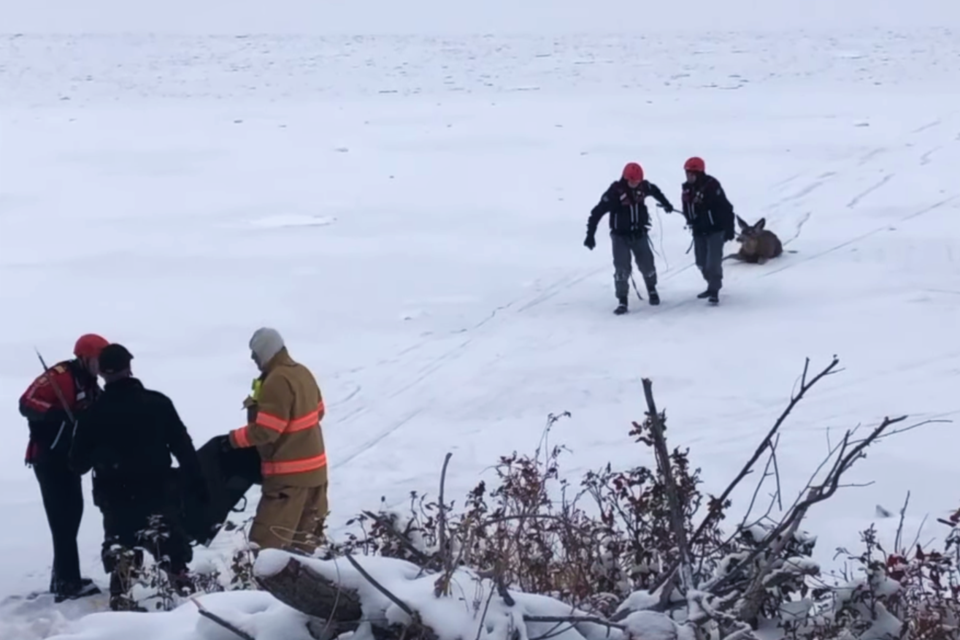 A dramatic rescue took place on Skaha Lake Saturday morning when a deer was caught in the middle of the ice. (via Castanet/Youtube)

A dramatic rescue took place on Skaha Lake Saturday morning when a deer was caught in the middle of the ice.

Conservation officers started receiving calls around 8:45 a.m. regarding the struggling deer out on the lake just north of Okanagan Falls along Eastside Road.

"It appeared to be injured, and it appeared that it could not stand up, either through exhaustion or as a result of its injuries," said conservation officer Clayton Debruin.

He attended the scene and called for help from the Okanagan Falls Fire Department and Penticton Fire Department, the latter of which luckily had an ice rescue team available to send for help. When he arrived, he saw a coyote circling the trapped deer, and scared it away.

The ice rescue team arrived and carefully collared the deer, dragging it to shore for assessment.

"It had some minor scavenging to its rear end," Debruin said, referring to wounds caused by animals like coyotes or ravens taking chunks out of it. But a preliminary assessment looked fairly positive overall, with no obvious broken bones or debilitating injuries.

"We still need to assess the injuries further to determine whether the deer can be released back into the wild or needs to be humanely euthanized."

VIDEO: Watch these Orcas swim in the waters off Point Roberts
Feb 26, 2020 11:54 AM
Comments
We welcome your feedback and encourage you to share your thoughts on this story. We ask that you be respectful of others and their points of view, refrain from personal attacks and stay on topic. To learn about our commenting policies and how we moderate, please read our Community Guidelines.