Smelly diapers on a warm summer night may have drawn a bear into a suburban home where a mother and infant were living.
0
Jul 25, 2019 7:10 AM By: Diane Strandberg

Smelly diapers on a warm summer night may have drawn a bear into a home in the 800-block of Seymour Drive in Coquitlam where a mother and infant were living.

Conservation officers who arrived at the home after receiving a call at 8:30 p.m. Tuesday found that a bear had ransacked the kitchen and dragged out the garbage. 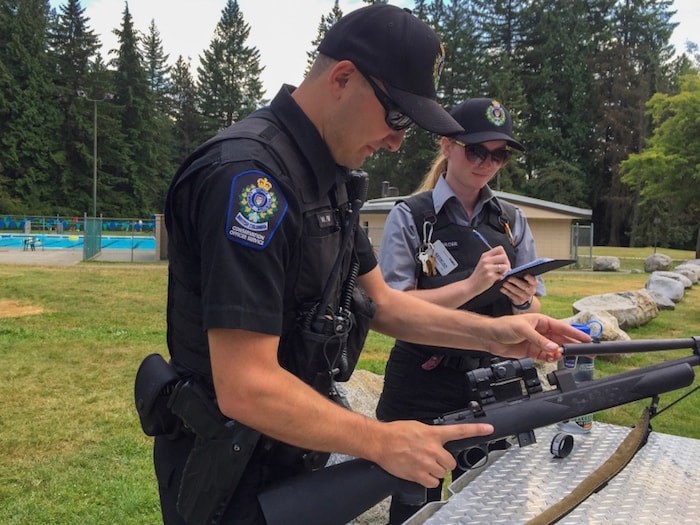 Conservation officer Wyatt Pile and Mackenzie Mercer, who is a wildlife safety officer, were working in Mundy Park Wednesday after it was reported that a bear and cubs were in the area not far from Spani Pool, where children were playing. Photo by Diane Strandberg/Tri-City News

But the bear had left the area by the time officers arrived so they set up a trap near the home.

According to Sgt. Todd Hunter of BC Conservation Officer Service (BCCOS), the bear made several trips into the house via an open back door and unsecured garbage in carts outside the home may have been the attractant, he said, noting the waste carts had been tagged by city crews.

“There could be an attractant issue with the diapers,” Hunter said.

The bear was seen earlier in the day hanging out in a tree in an area along Como Lake Avenue, where contractors were working on replacing a FortisBC pipeline.

“It wasn’t doing anything,” said Hunter.

But then it walked several yards to the home and entered through the back.

“There was an opportunity for easy access. There was no forced entry by the bear but it is concerning,” he said, noting that if found, the bear would have to be euthanized because of its bold entry into the home.

Meanwhile, across the street at Mundy Park, members of the conservation officers were keeping an eye out for a sow and two cubs that had been seen earlier while, nearby at Spani Pool, groups of children were playing.

A concession stand was open but not allowed to sell hot food.

Hunter said the bears hadn’t been aggressive but because of the sighting in daylight hours, the conservation officers were deployed, a tranquilizer gun at the ready.

Meanwhile, the city of Coquitlam will keep a cooking ban in place for the park to help reduce conflicts between bruins and humans.

Hunter said while the bears have still been spotted in the area, there are no food sources readily available, and if people continue to manage their attractants, the bears will have to find something in nature to eat and might return to a more suitable habitat.

"If we lifted the ban, we all agree those issues would pop up," he said, later adding: "At the least, the conflicts that were occurring have ceased or they haven't been reported. We still encourage people to report what's going on. We make better management decisions and response decisions based on that."

Hunter said he suspects the bears are hiding in the large forested area in the popular park, then darting out occasionally, which is when they are seen by members of the public.

But if found, it is expected the trio would be relocated because they haven’t proven a public danger.

Earlier this month, a trap was set and certain parts of the park were closed to the public while officials worked to safely capture the sow and two cubs, which had been active in the area for more than a month.

There are several wildlife corridors in the area, which is why it is important to secure attractants to discourage bears, and other wildlife, from hanging around and looking for food, Hunter said, noting it’s been been an unusually busy year for BCCOS in the zone that stretches from Anmore to Mission.

BCCOS said it has been working closely with the city of Coquitlam to deal with the Mundy bears and added that any sightings or conflicts should be reported as soon as possible by calling 1-877-952-7277.