Three B.C. dogs have been crowned the fastest whippets in North America, after returning home from a near podium sweep at a national whippet racing championship in Indiana.
0
Nov 4, 2019 6:59 AM By: Roxanne Egan-Elliott 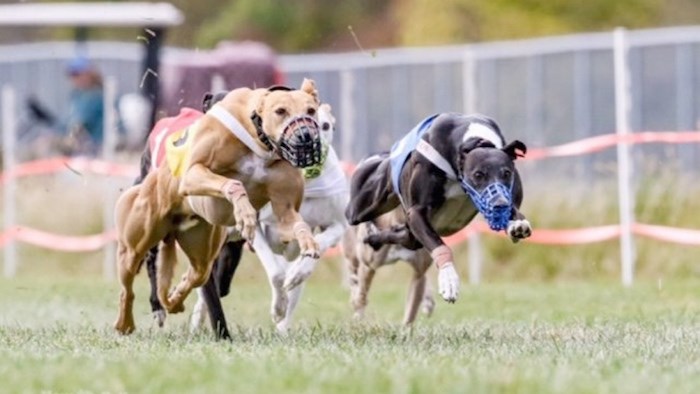 Ryder, left, and Lucy race to the finish at the whippet national championship in Indiana, Oct 18-20. Photo by Mary Huff

Three Greater Victoria dogs have been crowned the fastest whippets in North America, after returning home from a near podium sweep at a national whippet racing championship in Indiana.

All three are from the same litter, bred by Craig Mearns on his North Saanich property.

Mearns flew to the midwest state with his two dogs, Ryder and Lucy, for the event, which took place in Danville, Indiana, on Oct. 18-20. A James Bay woman, Marie Anne Piche, owns the third dog, Bubba.

The dogs are the offspring of Piche’s male dog and Mearns’s female dog, which came from a line of award-winning whippets bred at a kennel in Cobble Hill, which has since shut down.

After accumulating points based on their results in four races, Ryder came out on top of the pack of about 100 dogs, with Lucy in second. Bubba shared third place with another dog, Mearns said.

He was surprised how well his animals stacked up against the international competition.

“Nobody has one and two. That never happens,” he said.

Mearns decided to travel to Indiana for the event after his dogs won several races on the West Coast, from Vancouver and Squamish to Seattle and Oregon.

The three dogs, all turning four this month, have a special gene that makes them quick, but can be a problem for breeding.

Mearns said they came from a litter of four, but the other dog doesn’t have the gene, and isn’t quite up to national championship standards.

Mearns doesn’t do much formal training with the dogs.

“They kind of run up and down and around the property all the time. That’s how they get in shape,” he said.

Mearns thinks that’s an advantage for his dogs, because they work themselves as hard as they want to.

The dogs ran two types of races in Indiana: a straight track 182 metres long and a 275-metre oval race.

The canines chase a lure, which Mearns said is usually a white plastic bag filled with some rabbit skin or something that carries a scent, and a squeaker.

Mearns came home with ribbons and trophies — some so big he had to send them back with other competitors returning to the West Coast by RV.

As for the dogs, Mearns said they don’t need a reward.

“They have a good time. They’re wagging their tails, so they’re very happy,” he said.

When they’re not running around his property or winning races, Mearns said, the dogs like to curl up on the couch and relax.