A Victoria man who posted photos of himself feeding a bear doughnut holes along the Alaska Highway pleaded guilty in provincial court.
Cindy E. Harnett Aug 29, 2019 6:49 AM 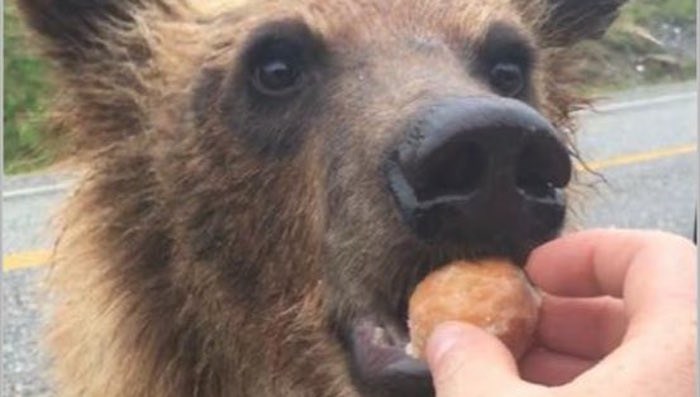 A Victoria man who posted photos of himself feeding a bear doughnut holes along the Alaska Highway pleaded guilty in provincial court.

Randy Scott, 31, was charged along with Megan Hiltz on Oct. 15, 2018, by the B.C. Conservation Officer Service under the B.C. Wildlife Act for intentionally feeding or attempting to feed dangerous animals, in this case bears.

The conservation service said Scott and Hiltz, 27, were feeding bears from their vehicle while driving along the Alaska Highway.

On Aug. 22, Scott entered a guilty plea and was fined $2,000 and ordered to stay a minimum of 50 metres from bears for six months, said Brinsky. On Tuesday, the charges against Hiltz were stayed, he said.

The investigation began in 2017, said Brinsky.

The probe was the result of complaints about a now-deleted Facebook post belonging to a “Randy Scott” dated June 12, 2016, that said “Thousand timbits ready for bear feeding” and showed photos of what looks like a blue recycling bin full of doughnut holes and close-up photos of bears, two of which are eating from a person’s hand.

On Aug 22/19, the individual who posted pictures on social media of himself feeding bears along the Alaska Hwy and, therefore, was charged by BCCOS for unlawfully feeding bears pled guilty in Prov Court & was fined $2k & ordered to stay away a min of 50m from bears for 6 months. pic.twitter.com/uBUmEVWwld

“There was concern that social media posts showed an individual feeding Timbits to bears,” said Scott.

The photos were located and investigation began with identified persons of interest, said Brinsky. More complaints were reported in June 2018. Recommendations were sent to Crown counsel, and the matter made its way through the court.

This week, the conservation service posted a photo of a bear being fed doughnut holes, and confirmed the individual who posted pictures on social media of himself feeding bears along the Alaska Highway had pleaded guilty and was fined.

Individuals who feed dangerous wildlife put other people unaware of the inherent risks of that activity in danger, but also harm the animals, which will become habituated to view humans as a food source, said Brinsky.

Conservation officers were concerned the if the posts became popular, they would send the wrong message.

“When a bear becomes food-conditioned and associates humans with a food source, it can end badly; it can be severe for the human and even more unfortunate for the wildlife,” said Brinsky.

This summer, a woman photographing a bear from her vehicle had her hand bitten, said Brinsky. Once fed by humans, bears can become aggressive for more food, he said.