Conservation officers have killed the first bear of the season on the North Shore after it became hooked on Lynn Valley residents’ garbage.
Apr 25, 2019 6:49 AM By: Brent Richter

Conservation officers have killed the first bear of the season on the North Shore after it became hooked on Lynn Valley residents’ garbage.

The black bear first started popping up around Kilmarnock Crescent in early April, according to conservation officer Lonnie Schoenthal, and almost immediately started breaking into lockable garbage bins provided by the District of North Vancouver. 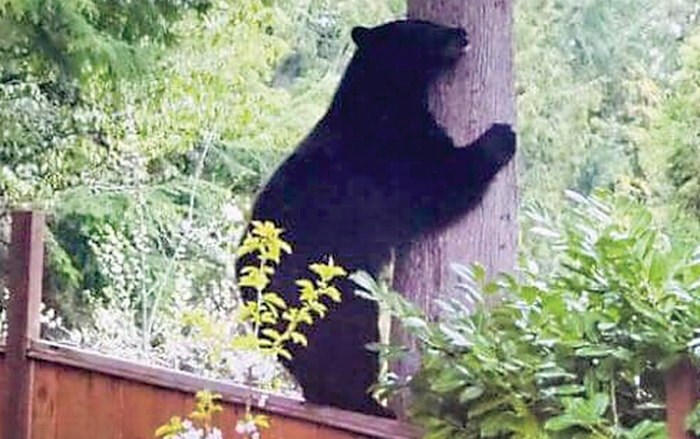 A 220-pound black bear climbs a tree in Lynn Valley. The bear has since been trapped and killed after it became habituated to eating garbage. Photo courtesy Jenny Brunhart

“It went from a bear sighting to a habituated bear and food-conditioned bear in a matter of two weeks, roughly, and as a result, much like other situations like this, a trap was deployed. It was about three days after that the bear was captured,” Schoenthal said.

The bear, a healthy male weighing about 220 pounds, had become too dependent to garbage to be considered for relocation and was destroyed by conservation officers on Sunday, Schoenthal said.

“If we were to relocate this bear, we could only relocate it so far away and the bears typically find their way back to unnatural food sources,” he said.

Christine Miller, president of the North Shore Black Bear Society, said she and her volunteers have been working hard to spread the word in the area that the bears are waking up and in search of food. So far they’ve reached more than 800 homes with letters or door hangers, specifically asking people to be cautious with their garbage carts.

“People are treating them like bear-proof carts rather than bear-resistant carts,” she said. “Once (a bear) gets into a property damage mode of behaviour, it can lead to its death sentence, which is what happened with this guy.”

The carts need to be kept clean, Miller said, and food scraps should be wrapped in newsprint or brown paper bags. People who don’t have a highly secure garage or shed should be freezing their compostables before putting them at the curb.

Under the district’s solid waste bylaw, residents must not put their garbage out before 5:30 a.m. on collection day or they face a $100-fine. But Miller said one of the Black Bear Society’s volunteers drove from Cates Park to Badger Road in Deep Cove on Tuesday night and counted 27 homes with their garbage carts put out early.

Miller said she has taken the issue up with the District of North Vancouver in hopes the municipality will do more public education about the garbage carts.

“People wait until the bears get there before they take down their bird feeders and by then, it’s kind of late,” she said. “We encourage people, if they’re adamant about feeding birds, to put small quantities out when they’re home to monitor it.”

April is early in the year for a bear to be killed, Miller said. In 2018, there were just two bears destroyed on the North Shore because of conflicts with humans, but in 2017, there were 18.

Miller said she hopes if North Shore residents start improving their habits now, other bears will be spared the same fate as the Kilmarnock one, including a smaller bear that’s been spotted on nearby Carmaria Court.

“I don’t want this bear to die in vain,” she said.