A Richmond-based First Nations society, with connections to the fishing industry, is proposing to bring seal-hunting to the west coast.
Feb 6, 2019 10:23 AM By: Alan Campbell

A Richmond-based First Nations society, with connections to the fishing industry, is proposing to bring seal-hunting to the west coast.

The Pacific Balance Pinniped Society is planning to meet with the Department of Fisheries on Thursday, in a bid to get a hunt up and running. 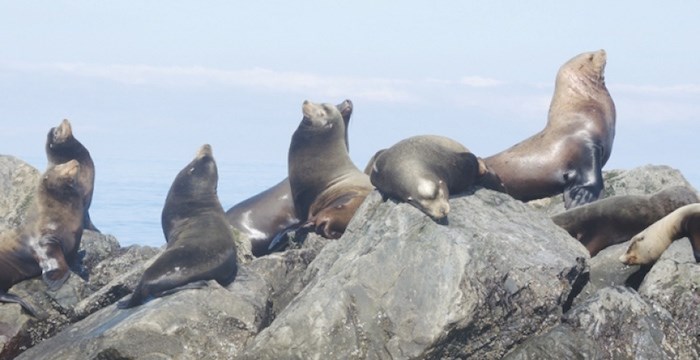 These sea lions off the coast of Steveston could soon be on the menu if a First Nations society gets the green light to kick off a commercial hunt. File photo, Richmond News

Ultimately, if given the green light, the group would develop a seal and sea lion hunt and subsequent harvest, with the product going to restaurants and the pet food industry.

The society, which is mainly made up of a directorship of B.C. First Nations, claims the over-protection of seals and sea lions has led to overpopulation of the marine mammals, whose appetite for salmon is, in turn, affecting salmon stocks and the resident Orca population.

Many coastal First Nations are already entitled to hunt seals and sea lions under their Aboriginal Fisheries Strategy agreements with Fisheries and Oceans Canada.

The society is meeting with the federal government on Thursday to find out if commercial harvesting can be authorized and is asking for hunting rights to be extended across all coastal First Nations.

“This week shall be the time when we finally hear if our federal government is behind what we all know needs to take place for the preservation of our priceless salmon and other fin fish resources of British Columbia,” said Thomas Sewid, on the society’s Facebook page.

“After all, they are more than fish, they are our way of life.”

Sewid went on to say that the current situation is a “natural disaster” that “has all been brought on by our over-protection of pinnipeds with outdated laws.

“All of us that care about our salmon, steel head, sturgeon and other fin fish along with the wildlife that depend upon the resource, must unite to see an expanded harvest become a reality before it's too late.

“If not, this week will be a date which will live in infamy.”

Local First Nations hunters and fishermen have already been asked to harvest seals for lab tests, to determine if they are safe for human consumption.

Samples of liver, heart, flesh and blubber are being tested to see if they are fit to sell into markets in North America, Europe and Asia, where there is demand for pinniped (mammals that have both front and rear flippers) products, which are rich in omega-3-rich and bones, which are used in traditional Chinese medicines.