Mark Matthews, back, has his dog Bounder, who has lymphocytic leukemia, examined by Dr. Ben Weinberger, right, and Dr. Emilia Gordon at a free animal health care clinic in the Downtown Eastside of Vancouver, B.C., on Thursday October 26, 2017.
0
Oct 31, 2017 9:11 AM By: The Canadian Press 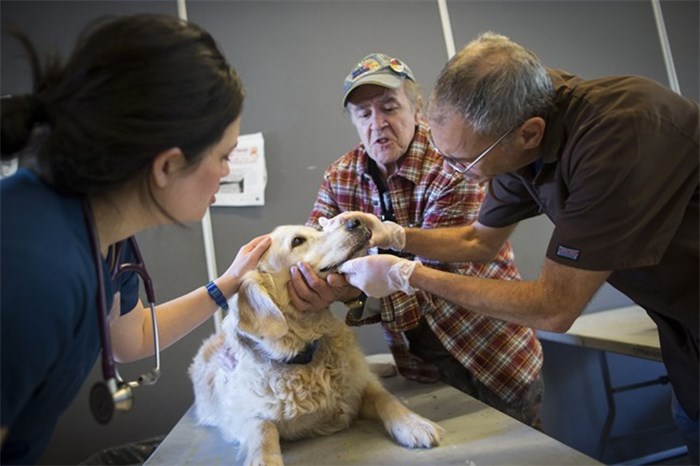 Mark Matthews, back, has his dog Bounder, who has lymphocytic leukemia, examined by Dr. Ben Weinberger, right, and Dr. Emilia Gordon at a free animal health care clinic in the Downtown Eastside of Vancouver, B.C., on Thursday October 26, 2017. THE CANADIAN PRESS/Darryl Dyck

VANCOUVER - Mark Matthews isn't sure he would have survived life on Vancouver's streets without his loyal golden retriever, Bounder.

The dog has been his constant companion for a decade, including a year where they were homeless. Matthews said through it all, Bounder has given him emotional stability and a sense of responsibility.

"This guy kept me centred," he said, as the dog lazed between his feet. "If I didn't have him, who knows."

Bounder is nearly 12 years old and his health is failing. The dog's back legs no longer work, so Matthews crafted a kind of wheelchair for him out of plastic piping, straps and wheels from a baby carriage. But Bounder also has cancer and a growing lump on his upper lip.

With limited resources, Matthews has relied for years on the SPCA's monthly free veterinary clinic in the city's Downtown Eastside. It's one of a handful of services geared towards helping low or no-income people provide for their pets.

During October's clinic, four veterinarians did physical exams, doled out flea treatments and vaccinations, and signed animals up for a free spay and neuter clinic. All of the medication is donated and everyone working are volunteers.

Shawna Taylor brought her six-year-old dog Josiah to the clinic for flea treatments. Josiah squirmed and yelped as three people held him while another trimmed his nails.

"This guy is treated a lot better than I treat myself," Taylor said. "He's got friends that drop off steak and crab for him, where I get ham and cheese or peanut butter and jelly sandwiches."

Animals owned by homeless and low-income people are generally very well cared for, said Kathy Powelson with Paws for Hope, another group that provides free veterinary care for vulnerable people and their animals in the Lower Mainland.

"The animals that (veterinarians) see in our free clinics are generally as healthy as the animals that they see in their private practice," Powelson said.

Providing the free care allows these people to better care for themselves, Powelson added.

"Often with people and their pets, they will put their animals first and they will feed their animals before they feed themselves. And so by providing this service, we're helping to reduce some of that stress."

Kim Monteith, manager of animal behaviour and welfare for the B.C. SPCA, oversees the free clinic and a weekly food bank in the Downtown Eastside, which provides everything from free animal food and toys to leashes and training tips.

The services help fill a void because many people who use them don't have a family member or a vet they can call when they're worried about their animals, she said.

Instead, they've built relationships with people like Monteith, who spends several hours after work each week seeking out pet owners who might need a hand in Vancouver's homeless camps, parks, rooming houses and alleys.

"They're no different than anybody else," Monteith said. "They may just have more struggles than us and be judged more and need that extra help."

Monteith has been doing the volunteer work for 17 years and said the relationships she has built help her protect the animals.

Vulnerable people are often stigmatized, she added, and some people assume they have animals just to get sympathy or more money from panhandling.

But living on the street or in a shelter doesn't prevent someone from caring deeply about their pet, she said.

"It's that unconditional love," she said. "And I think people, they don't see, it's like you or me. Why you love your dog or your cat, it's that companionship."

As the SPCA's October's clinic wrapped up, Bounder laid patiently on a plastic folding table as three veterinarians checked his lumps and listened to his chest.

One doctor explained to Matthews that he was concerned and wanted to send the dog for an X-Ray.

Matthews called a friend and arranged for a ride to the SPCA's animal hospital. He said he knows Bounder's time is running short, but hopes to keep his friend around a little bit longer, as long as he's not in pain.

"There's not enough that I can do for him for what he's done for me," Matthews explained.