A Nanaimo man describes what it was like to be stung at least seven times by Asian giant hornets
May 5, 2020 9:03 AM By: Carla Wilson 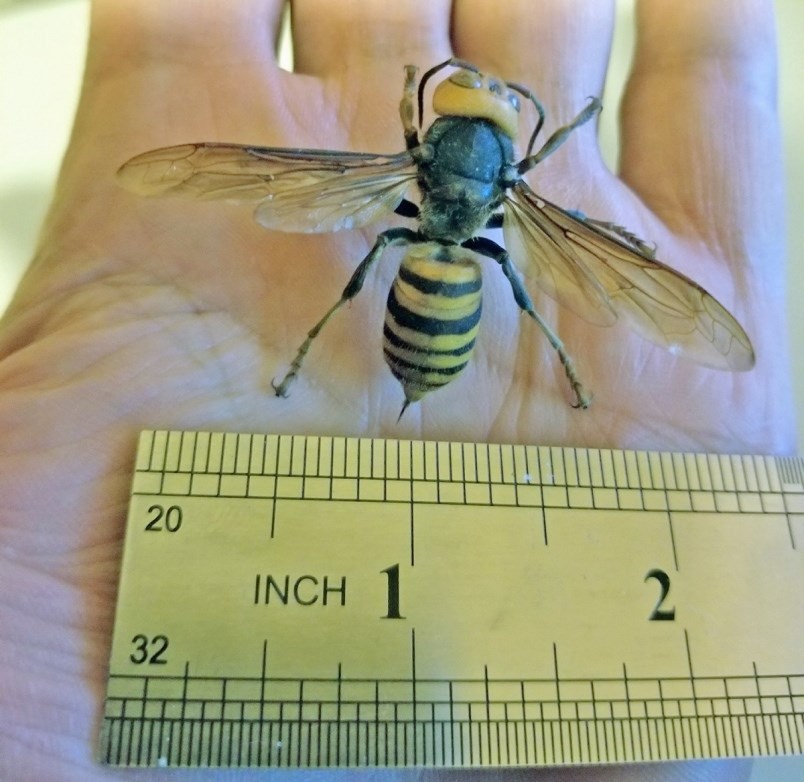 An Asian giant hornet from the Nanaimo hornet's nest. Photograph By JOHN HOLUBESHEN

A Nanaimo man stung at least seven times by Asian giant hornets likens it to having “red-hot thumbtacks being driven into the flesh,” while another Island man compares a sting to being hit in the chest.

These plus-sized hornets can measure up to five centimetres long, with a wingspan of four to seven centimetres.

“They are intimidating, no question. They are huge,” provincial apiculturist Paul van Westendorp said Monday.

Officials in B.C. and Washington state, where the hornets have been sighted, worry that the apex predators could be building underground nests and settling in North America after somehow hitching a ride across the Pacific Ocean.

Asian giant hornets were first spotted in Nanaimo last August, and a nest was discovered in Robins Park the following month. A provincial entomologist and local beekeepers eradicated the nest using a carbon dioxide spray and removed the hornets and their queen.

That nest was found by Nanaimo beekeepers John and Moufida Holubeshen, who were looking for it. John Holubeshen was about six metres from the nest when a hornet attacked him through his T-shirt, stinging him on his upper chest near his throat.

“It’s one of the worst stings I’ve had,” said Holubeshen, who treated the sting with ice. “It was more like a physical pain — like having a bruised rib. … It was not like anything I’ve felt before.”

The Holubeshens and two others, including entomologist Conrad Bérubé, returned that evening to eradicate the nest.

Bérubé was stung at least seven times. Two stings went through two pairs of pants he was wearing and drew blood.

After feeling as though hot thumbtacks had been stuck into his leg, he experienced “throbbing muscular aches” in the legs for about 24 hours, he said.

The sting was about six millimetres long. Bérubé said a single sting can kill tissue around the puncture several millimetres in radius and depth.

In November, van Westendorp confirmed that a photo taken in White Rock was that of an Asian giant hornet. Two more hornets were captured in Blaine, Washington, near the B.C. border, in December.

The fear is that the hornets could harm humans, possibly causing death in some cases, and devastate honeybee populations.

B.C. honeybees have not developed a strategy for defending themselves against a giant-hornet assault and could easily fall victim to an attack.

In the spring, when the weather warms up, over-wintering queens emerge and worker hornets help build up a nest. Eventually, in the summer, the nest will get large enough to generate offspring that will sexually mature, van Westendorp said. “For that they need a lot of animal protein.”

A hornet scout will find a honeybee colony and watch it for a while to determine if it is suitable for a raiding party, he said.

If so, it will deposit a pheromone-marker scent near the entrance of the colony, then fly back home and recruit other hornets.

Up to a dozen of these female workers will head back to the entrance of the hive, where they will attack bees, van Westendorp said. “With their huge mouth parts, they will slice and kill wherever they can.”

Hornets aren’t particularly interested in feeding on adult bees, but the attack sends bees into such a massive panic that they forget about defending their nest, leaving their young unprotected.

That’s when the hornets move in on their real targets — the bees’ brood. Bee larvae are carried back to feed the “very hungry” hornet larvae. “They will munch them up in big meatballs.”

Larvae will regurgitate part of the partly digested bee larvae for the adult workers, van Westendorp said. “So it’s a really interesting exchange of food that is taking place.”

That rich protein will allow hornet larvae to mature to the point where they can emerge sexually mature and can mate successfully, creating more queens.

DNA tests of hornets in Nanaimo and Blaine found one group originated in Japan and another in Korea, he said.

There are still questions about whether the hornets would be able to successfully establish themselves in B.C. even though they live in forests and favour moist habitat, van Westendorp said.

It’s not yet known if the coniferous forests here — compared with more deciduous trees where the hornets originate — would make a difference, since they generate different kinds of insects.

Van Westendorp said it’s not clear if the hornets would have enough prey, adding they would not be suited to living in B.C.’s Interior or Alberta.

Gail Wallin, executive director of the Invasive Species Council of B.C., said if there are any Asian giant hornet queens, they would likely be emerging about now and feeding on sap.

She urges anyone travelling to be extra careful to ensure they aren’t carrying any unwanted insect passengers.

Holubeshen speculates that the Nanaimo hornets might have originated with a queen that arrived on a cargo ship.

• People who are stung multiple time or who develop symptoms of toxic or allergic reaction are advised to seek medical attention immediately.

• If you think you’ve spotted an Asian giant hornet, call the Invasive Species Council of B.C. at 1-888-933-3722, or via the council’s “Report Invasives” mobile phone app, or online at: bcinvasives.ca/report