Meet Hickory: The little bear cub lucky to be rescued in B.C.

Meet Hickory, the latest bear cub to be taken into care at the Critter Care Wildlife Facility. While he looks extremely cute, this little cub was lucky to be found when he was because he is far too small for his age.
0
Jan 21, 2019 7:17 AM By: Elisia Seeber

Meet Hickory, the latest bear cub to be taken into care at the Critter Care Wildlife Facility.

While he looks extremely cute, this little cub was lucky to be found when he was because he is far too small for his age. 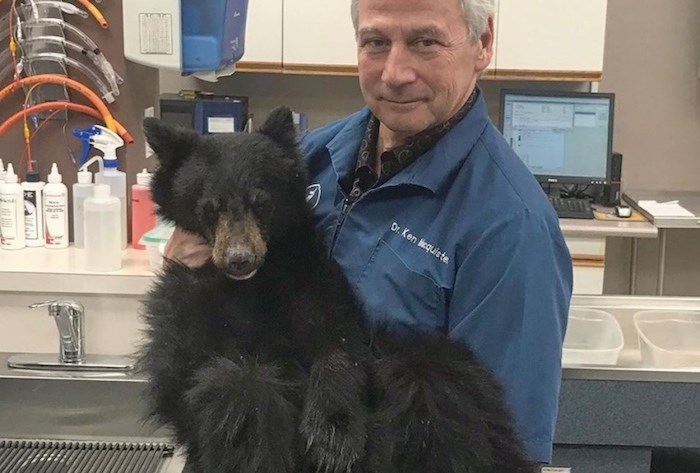 The young black bear was rescued in Maple Ridge after being spotted scavenging for food in people’s backyards and extremely malnourished.

The bear arrived at the Langley centre last Saturday, Jan. 12, at only 20lbs – around 50lbs less than what a one-year-old cub should weigh.

CCWS assistant executive director Winona Reinsma told the Courier the cub’s arrival was a little unexpected, given that bears had already gone into hibernation in the mountains.

“He came in very much underweight,” she says.

“Normally a cub his age will have gone into hibernation with his mother already, and their weight would average about 70 to 80lbs. He is far too little for that, so were happy he was rescued and brought in.”

Reinsma says it’s unknown what happened to the cub’s mother.

“We don't know anything about what has happened to him, we only know that he was an orphaned bear cub, obviously starving and not doing well out there on his own,” she says.

“He was out there fending for himself. There were some reports of a bear cub going into yards and eating bird seeds.”

After just a week at the centre, little Hickory has already put on five pounds, munching on greens, vegetables, fruit and kibble.

“Hickory is doing very well. He is much stronger and more active than when he first arrived,” Reinsma says.

“Although it is still too soon, we anticipate that he will be with us till late Spring or early summer, depending on his rehabilitation and recovery.”

After an online shout out to name the cub, the centre’s new supervisor Miha Oitzl decided Hickory would be the best fit. He’s the fourth bear currently being cared for at the centre – joining fellow black bears, twins Seymour and River, and Cedar.

Reinsma says coincidently, Hickory’s veterinary check-up was done by Dr Ken Macquisten, who will be the featured speaker at the centre’s 20th anniversary Gala on April 27th – with early bird tickets now on sale.

Dr Ken Macquiste is the Director of the Grouse Mountain Refuge for Endangered Wildlife and was the founder of Kicking Horse Grizzly Bear Refuge and has worked with various wildlife rehabilitation centres.

CCWA is the only facility in B.C. specializing in the care of mammals and one of only four bear rehabilitation facilities in the province.