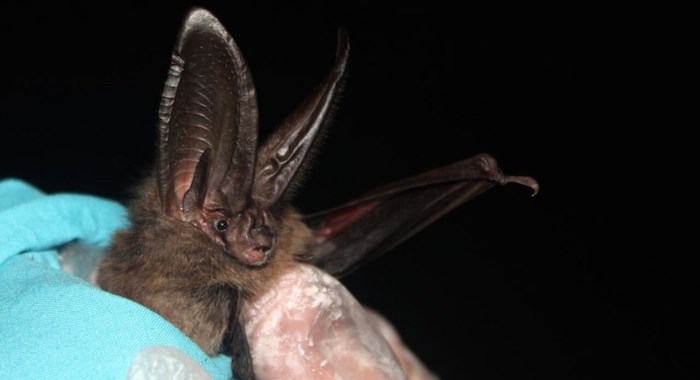 Townsend’s big-eared bat is a blue-listed bat species in B.C. due to habitat loss and disturbances. Photo J. Barrett

Things are getting a little batty this week!

As Halloween approaches, bat enthusiasts around B.C. are celebrating and supporting bats by taking part in International Bat Week (Oct. 24-31).

Bat Week is all about appreciating these mysterious, and kinda spooky, animals and their benefits — from eating insects to pollinating the agave plant, which is most famous for being used to make tequila.

“Bats in B.C. help control agricultural and forest pests, as well as mosquitoes in our yards - but now bats need our help” says Mandy Kellner, coordinator for the B.C. Community Bat Program.

“The conservation of bats in B.C. has always been important, since over half the species in this province are considered at risk. With the continuing spread of White-nose Syndrome in Washington State, bat conservation is more important than ever.”

White-nose Syndrome (WNS) is a disease caused by an introduced fungus. It was first detected in North America in a cave in New York state in 2006. Since then, it has spread to 33 states and seven provinces in North America, decimating bat populations along the way.

“Luckily, WNS is not yet in B.C.,” Kellner said. “But we are preparing for its arrival by raising awareness about bats, working with landowners who have bats in buildings, enhancing bat habitat, and monitoring populations.”

The Community Bat Program will continue to monitor local B.C.’s bat population for signs if WNS. The program is asking residents to report dead bats or sightings of winter bat activity starting Nov. 1. Sightings can be reported online at bcbats.ca, via email at vancouver@bcbcats.ca, or by calling 1-855-922-2287 ext. 11.