Don’t confuse these largely harmless insects with the ‘murder hornet’

Some perfectly harmless — though somewhat menacing-looking — insects are being mistaken for the Asian giant hornet
Aug 10, 2020 7:47 AM By: Darron Kloster 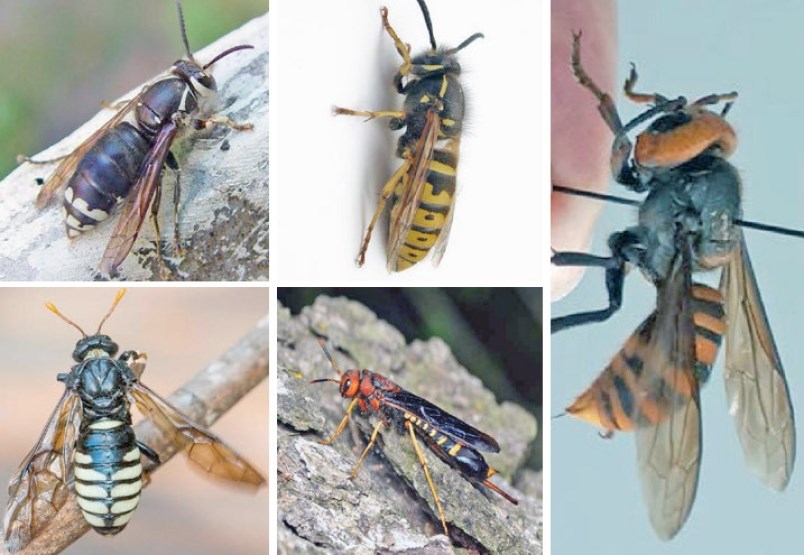 There are several large insects that are native to British Columbia that are commonly seen and could be mistaken for Asian giant hornets. Clockwise from upper left: bald faced hornet, yellow jacket, Asian giant hornet, horntail wasp, and elm sawfly. The insects are not shown to scale

B.C. bugs are getting a bad rap thanks to the murder hornet.

Some perfectly harmless — though somewhat menacing-looking — insects are being mistaken for the Asian giant hornet, said Paul van Westendorp, an apiculturist with the provincial government. He’s the point person on the team tasked with flushing out and destroying any so-called murder hornets, an invasive species first discovered in Nanaimo last summer.

A photo taken Wednesday in Fernwood by Noah Williams was identified by van Westendorp as a horntail wasp — an intriguing sight indeed, but no murder hornet.

“The bug is a horntail. Native, solitary and completely harmless,” said van Westendorp. “They [usually] occupy forest habitat with cut timber. The posterior includes an ovipositor used to lay eggs.

“Pretty intimidating insect, but not of any concern.”

Williams said the horntail wasp landed in a bucket of water and was drowning. He couldn’t believe the size of the insect, saying it was as long as a cigarette lighter.

Other insects often mistaken for the Asian giant hornet are the bald-faced hornet, yellow jacket and elm sawfly, all native to B.C., said van Westendorp.

Versions of some have been around a long time in B.C.

Bruce Archibald, a paleoentomologist with the Royal B.C. Museum and Simon Fraser University, discovered a fossilized giant horntail wood wasp during a dig near Cache Creek in 2015.

The 53-million-year-old species, which he dubbed Ypresiosirex orthosemos, was about seven centimetres in length, which is slightly larger than its modern descendants of about 2.5 centimetres.

Although they look like stingers, horntail wasps don’t have the ability to sting or bite. Females have a long, horn-like tail used to deposit eggs. Their harm is the damage the larvae can do to trees and wood in your home where they usually lay eggs.

The elm sawfly is another one mistaken for the Asian giant hornet.

The sawfly is intimidating at 2.5 centimetres in length, but they also lack a stinger and are considered harmless to humans, says Pest Control Canada. Sawflies also have ovipositor to lay eggs and have strong jaws, but use them to strip bark from trees to reach sap for food.

The elm sawfly is prevalent across North America.

The bald-faced hornet, a type of yellow jacket but coloured white and black, is a more aggressive insect. It’s also big and it packs a powerful sting when its nests are threatened.

It is strictly a predator, usually feeding on other insects, although Claudia Copley, an entomologist from the Royal B.C. Museum, told the Times Colonist last year she once saw a bald-faced hornet sting a young toad to death and carry it off.

Yellow jackets are very common, annoying at picnics and feared for their painful stings which can cause allergic reactions, but the province considers them useful in the ecosystem as they prey on flies, caterpillars and other insects.

The Asian giant hornet is usually found in eastern and southeast Asia. It got the murder hornet moniker from Japan, where there have been several documented deaths due to multiple stings.

There have only been a handful of specimens collected since a nest was discovered near Nanaimo a year ago.

Canadian and U.S. officials are co-operating to locate and destroy any new infestations with baited traps along the B.C.-Washington border.

An Asian giant hornet was discovered last November in White Rock and two specimens were found in December at Blaine, Washington.

An Asian giant hornet was collected near Langley in May. Another was taken on July 14 near Birch Bay, south of Blaine.

Sightings in the Cowichan Valley prompted the province to deploy jar traps last month in hopes of narrowing a search for a possible nest.

It’s unclear how the Asian giant hornet arrived in North America, but it is likely they hitched rides in container ships.

The species present a dire risk to honeybee populations in British Columbia, and can quickly destroy hives.