The North Shore Mountain Bike Association is warning people to avoid trails in the Seymour area after a few run-ins with a particularly territorial black bear.
0
Oct 3, 2019 1:52 PM By: Brent Richter 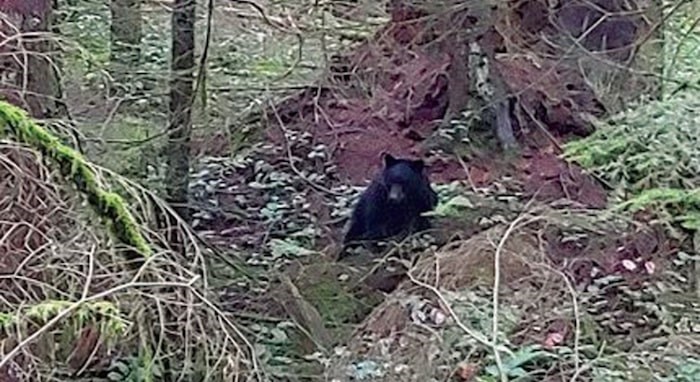 A territorial black bear that has been chasing people on the trails of Mount Seymour. The North Shore Mountain Bike Association is asking people to stay out of the area for now. Photo courtesy Cooper Quinn

The North Shore Mountain Bike Association is warning people to avoid trails in the Seymour area after a few run-ins with a particularly territorial black bear.

Cooper Quinn, president of the NSMBA, said the group will be posting signs at the trailheads between the second switchback on Mount Seymour and the top of Hyannis Drive.

Video posted online Wednesday shows the bear persistently chasing a group of men on their mountain bikes until they eventually band together and shout the bear away.

“Given the nature of the last interaction, we figure it’s best to minimize people in the area for a little bit,” Quinn said. “We are going to ask people to stay away from that area and those trails for a little bit to give that bear some space. It’s clearly getting a little fed up with people and just needs a little bit of room.”

Quinn said he was a little too close for comfort with the same bear last week.

“It was certainly not afraid of humans,” he said. “It was not being aggressive or anything like that, but made it clear it was time for me to move on.”

The NSMBA doesn’t have authority to close the trails, which are provincial jurisdiction, but Quinn said the group would monitor the situation and keep in touch with the Conservation Officer Service, B.C. Parks and the North Shore Black Bear Society, which they recently partnered with to educate trail builders.

Black Bear Society president Christine Miller welcomed the NSMBA’s decision to warn people away. Miller said the mountain bikers in the video did the right thing by holding their bikes up and shouting at the bear.

“If he was predatory, he could have caught them easily,” she said. “It’s best to stand side by side on the trail if there’s space to do that to make themselves look more dangerous or powerful.”

Miller has received reports of a bear in the same area approaching people to steal their food, indicating the bear has been fed on the trails, either intentionally or unintentionally.

While she agrees people should avoid the Seymour area trails for a while, Miller advises everyone going into the wilderness to carry bear spray.

“The best thing we can do for bears like that is shoot them with bear spray to let them know ‘OK, we’re here too and give us our space,’” she said. “That behaviour is becoming more dangerous. It is approaching a last resort in the sense that if someone reacted inappropriately, it could result in human injury.”

Right now, bears are foraging upwards of 20 hours a day to pack on weight before hibernation, Miller said, so residents need to be extra vigilant about keeping their yards free of an easy meal.

According the last batch of data released by the province, more than 400 bears were killed in British Columbia between April and August after getting into conflicts with humans.