People walking their dogs on Burnaby Mountain are being warned after a bizarre incident on Saturday.
Sep 9, 2019 6:55 AM By: Chris Campbell

People walking their dogs on Burnaby Mountain are being warned after a bizarre incident on Saturday.

A dog found a piece of meat on the mountain’s North Road trail, but it turned out there were needles in it, according to a Facebook post by Lorraine Ismail.

“Watch your dogs on Burnaby Mountain,” read the post. “This was pulled out of the mouth of a friend’s dog on the North Road trail. Needles in meat.”

Ismail is trying to share this with as many people as possible in case there are other pieces of meat with needles spread along local trails. 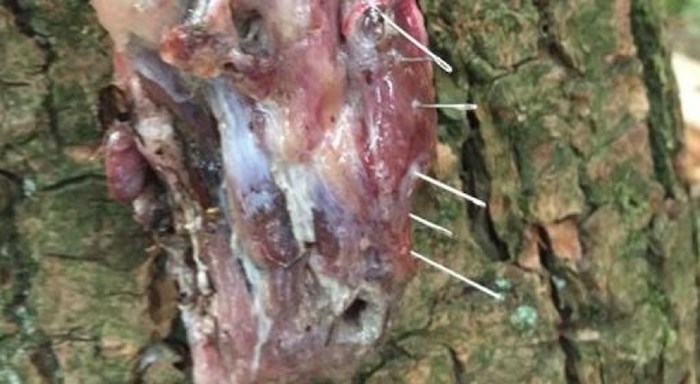 A big slab of meat with needles inserted into it was found on a Burnaby Mountain trail. Lorraine Ismail photo

It’s unclear why the meat with needles was on the trail, but some people have been known to lay homemade traps to hurt animals such as raccoons and coyotes that they view as pests.