No charges for man who took seal pup in B.C.

The Texas man grabbed a newborn seal pup from a floating log near the wharf in Port McNeill and kept it for several days
Aug 1, 2020 4:26 PM By: Darron Kloster / Times Colonist 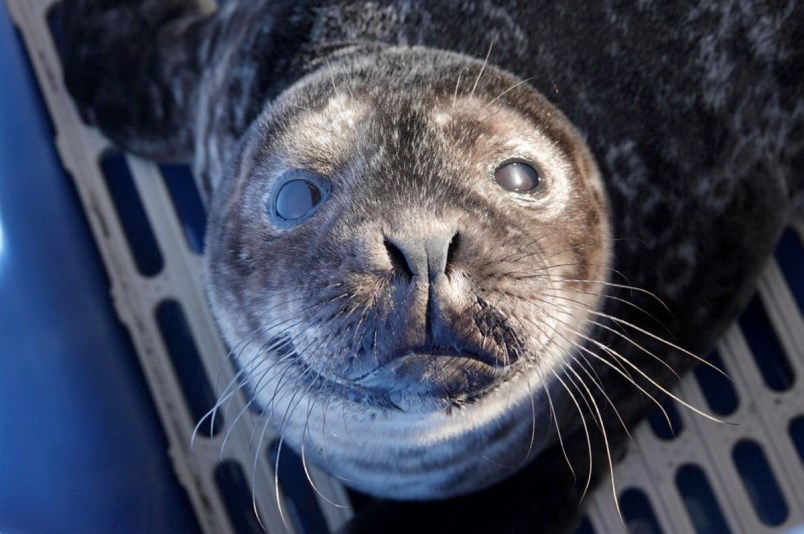 Zenon Samuel, a harbour seal pup, is being cared for at the Marine Mammal Rescue Centre after being separated from its mother near Port McNeill in early July. PHOTO: MARINE MAMMAL RESCUE CENTRE

A man from Texas who grabbed a newborn seal pup from a floating log near the wharf in Port McNeill and kept it for several days has avoided criminal charges.

There was initial outrage in the community about the boater’s presence in Canadian waters last month, but it was later learned he has dual citizenship and had permission to be here.

The Department of Fisheries and Oceans said it opted for a teachable moment and didn’t charge the man for snatching the five-day-old seal with umbilical cord still attached.

The pup, nicknamed Zenon Samuel, was turned over to the Marine Mammal Rescue Centre in Vancouver, where it was initially fed with formula and is now starting a fish diet.

Lindsaye Akhurst, the centre’s manager, said she initially heard from the boater’s wife that her husband had the seal pup and was heading to Vancouver.

Akhurst contacted the man, but cellphone reception was spotty, which made a quick handover difficult.

“I don’t think he was aware of the distance involved or about how difficult it would be to have a seal pup in his boat,” Akhurst said. She said most of the communication was through the man’s wife.

When Akhurst was finally able to speak with the man, he was near Campbell River and agreed to turn the pup over. There, the Mountainaire Avian Rescue Society arranged transport to Nanaimo.

From there, Harbour Air provided the pup with a free ticket to Vancouver and the Marine Mammal Rescue Centre.

“I did speak to him and let him know it was a wild animal,” said Akhurst. She avoided telling him of potential criminal charges in case he changed his mind.

Witnesses said the man ignored other marina users who advised that the pup should be left alone. They said he just grabbed the pup, put it in his boat and took off.

Akhurst said residents indicated an adult seal was seen near the pup earlier. “By the end, he does know what he had done [was wrong], and what we recommend if you come across a seal pup that is alone,” said Akhurst.

DFO and other marine mammal experts say seal pups are often left alone on beaches, rocks and logs while their mothers forage.

Akhurst said people take them thinking they are abandoned or in distress, but most of the time that is not the case.

DFO says seals spend about one third of their life on land, coming up on shore on a daily basis to rest, socialize, escape predators, give birth, nurse the young and bask in the sun to keep warm. Seal-pupping season is spring and summer, a peak time for boaters and beachgoers.

The Marine Education and Research Society, based in Port McNeill, wrote in a Facebook post that it hopes “this story leads to knowing that mother seals need to leave their pup to feed and that humans should not intervene, especially those who do not even have the local knowledge.

Akhurst said the rescued pup and others are released after an eight- to 12-week rehabilitation, usually in remote areas.

The Marine Mammal Rescue Centre has more than 50 harbour seals under care.

You can view them and donate to “adopt” them while they recover at mmrpatients.org.