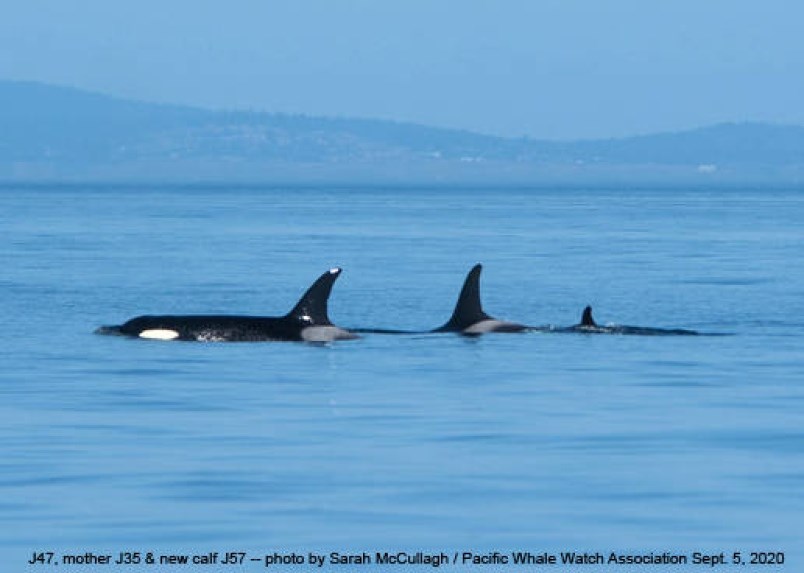 Tahlequah, the mother orca who carried her dead calf with her for 17 days and 1,600 kilometres in 2018, has given birth again.

The calf, born somewhere in Haro Strait, appeared to be “healthy and precocious” and “swimming vigourously” on Saturday, according to the Friday Harbour-based Centre for Whale Research. The centre knew the whale was born before Saturday because its dorsal fin was upright, and it takes one or two days to fully straighten after birth.

With that, the date of birth has been declared to be Friday, meaning gestation began in February 2019. The gender has not yet been determined and won’t be known until experts can see the calf’s underside.

Tahlequah, part of J pod and also known as J35, attracted international attention for 2018’s heart-rending swim, which the centre called a “tour of grief.”

The centre said it responded Saturday after J pod was reported to be off Dungeness Spit, at the north end of the Olympic Peninsula.

Researchers followed up on a report from a Pacific Whale Watch Association member that a small calf had been sighted.

“We hope this calf is a success story,” the centre said in a statement. “Regrettably, with the whales having so much nutritional stress in recent years a large percentage of pregnancies fail and there is about a 40 per cent mortality for young calves.”

Moorby said any birth among the southern resident killer whale population is a big event.

“Every single animal is important.”

Sarah McCullagh of Friday Harbour’s San Juan Safaris was part of the group that alerted the centre to the calf. She said “a very small fin” was seen tucked next to the main cluster of whales.

The centre then confirmed what was suspected.

“I was obviously elated,” McCullagh said. “So excited for J35 after the incredible loss she suffered a couple of years ago, but also for the southern resident community as a whole.

The Pacific Whale Watch Association said in a statement that it is hopeful for the calf but acknowledged the challenges the species faces.

“As we remain cautiously optimistic for the health and survival of this beautiful new addition to J pod, we hope this news does not distract or detract from the real issues these whales face in this region.”

Could Port Moody be home to a world-class marine research and education centre?
Aug 21, 2020 6:05 AM