Only 10 orcas worldwide have been documented with the condition, and scientists believe Tl’uk is one of five living right now.
Aug 27, 2020 9:29 PM By: Darron Kloster 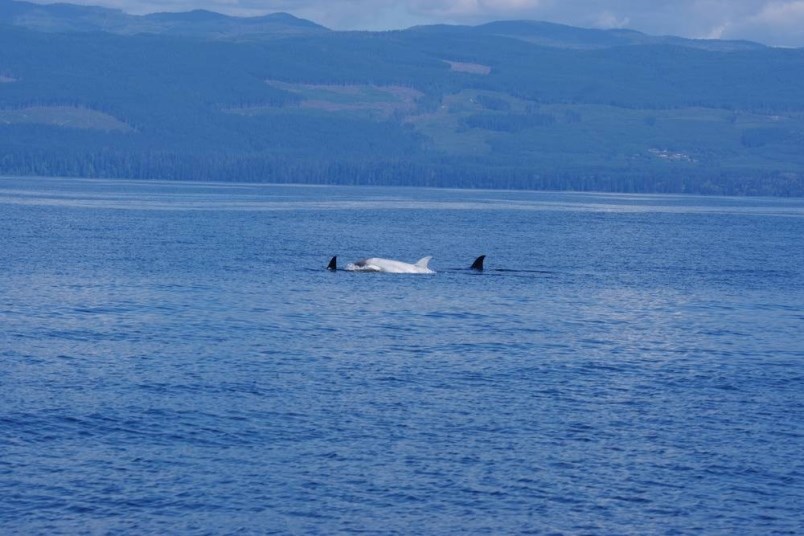 Paul Pudwell considers himself lucky to have crossed paths with a rare white orca several times over the past 18 months.

“I sure feel very fortunate — and I do with every whale I see — but this one really captures the wonder and glory of the wild,” said Pudwell, the co-owner of Sooke Coastal Explorations, of his latest encounter with the transient killer whale.

Pudwell photographed TO46B1B among its pod of Bigg’s orcas in the shipping lanes of the Juan de Fuca Strait on Tuesday at about noon. The white whale, estimated to be two years old, was travelling with its mother and another sibling, and possibly others, Pudwell said.

The orca is also known as Tl’uk, derived from the Coast Salish Halq’eméylem word for moon.

Tl’uk was spotted in early August off the southeast coast of Alaska with its pod by marine biologist Stephanie Hayes of the University of Alaska Fairbanks and crew aboard an Alaska Sea Adventures vessel.

It was the first documented sighting in Alaska, though the transient pod has historically travelled between there and Oregon.

Pudwell said he was the first to photograph Tl’uk near Sooke in November 2018.

The whale does not have pink eyes, a common feature in albino animals, and scientists say it likely has leucism, a lack of natural pigments that causes white or pale colourations.

Only 10 orcas worldwide have been documented with the condition, and scientists believe Tl’uk is one of five living right now.

Most of Tl’uk’s body is a pale white. The colouring is darker near its head, and the white patch behind its eye is clearly visible as brighter white.

Little is known about any of the white whales because there are so few and they move quickly. Scientists believe the white orcas may be at a disadvantage while hunting because their colouration may make them more visible to prey.

He said transient killer whales can travel up to 160 kilometres a day and are always on the move hunting seals, seal lions and porpoises.