Poisonous porcupine fish appears in B.C. for the first time ever

A poisonous spotted porcupine fish discovered on a Vancouver Island beach marks the first time this type of pufferfish has been seen north of San Diego, California.
0
Oct 27, 2019 9:30 AM By: Louise Dickson 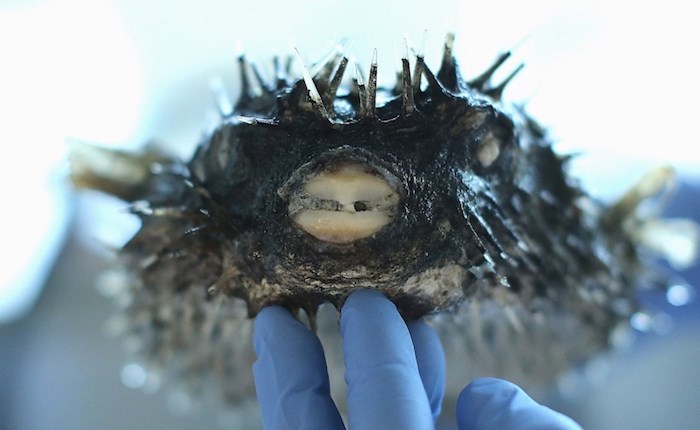 Gavin Hanke, curator of Vertebrate Zoology, shows off a spotted porcupine puffer fsh in his lab in the Fannin Tower at the Royal B.C. Museum. Photo by Adrian Lam/Times Colonist

What emerges is a B.C. first — a poisonous spotted porcupine fish discovered on a beach near Jordan River on the west coast of Vancouver Island on Oct. 5.

The spotted porcupine — a type of pufferfish — is almost 25 centimetres long. It’s boxy with spines that will run through your finger like butter, said Hanke, curator of vertebrate zoology at the RBCM.

Its face is flat, with two round, vacant eyes. It has a beak like a parrot formed from fused teeth. Little dark spots dot its belly and its fins.

“This is a fish that when it’s frightened or threatened will blow up into a nice little sphere covered in spines,” Hanke said. “It’s so cool to get stuff like this. It’s just one of a number of new records this year.”

Until now, the spotted porcupine has never been found north of San Diego. Its habitat is warm waters around the globe. In the western Pacific, it ranges from Japan to the Kuril Islands.

It’s possible this spotted porcupine came north on its own in the warm surface waters of the “blob,” the warm-water phenomenon off the west coast, said Hanke.

He believes its appearance is an effect of warming surface waters, which allow southern species to stray beyond their typical range. 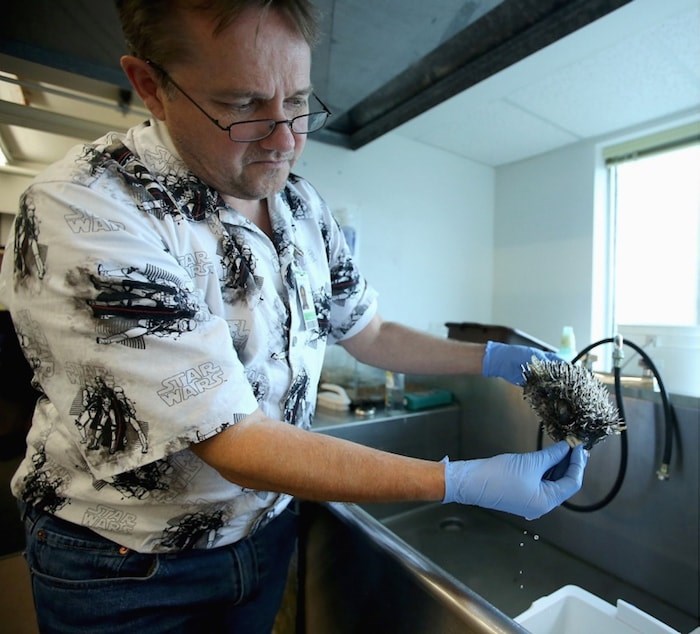 Gavin Hanke, curator of Vertebrate Zoology, shows off a spotted porcupine puffer fish in his lab in the Fannin Tower at the Royal B.C. Museum. Photo by Adrian Lam/Times Colonist

The California Current moves southward off the Pacific coast from southern B.C. to southern Baja California.

Danny Kent, curator at Ocean Wise at the Vancouver Aquarium, is also interested in the discovery of the spotted porcupine. He sent photographs of the fish to colleagues in California, Japan and Vancouver.

“It’s definitely not something we typically see here at all,” said Kent. “We can’t say for sure it came up because of climate change or the blob, but it’s a pretty good guess it’s from that. There are lots of other things that start showing up when we have warm water masses up here off the coast and during El Nino years.”

Although some of their colleagues speculated the specimen was released from the pet trade, both Kent and Hanke think that’s unlikely.

On Friday, American scientists from the National Oceanic and Atmospheric Administration took a look at the spotted porcupine with Hanke.

“We just shook our heads and wondered how did that get here. It’s hard to say,” said Hanke.

The spotted porcupine will become part of the museum’s “wet” collection — stored in fluids — which includes a trigger fish and a louvar.

The trigger fish was found alive and healthy off the west coast of Vancouver Island in the fall of 2014. It normally ranges only as far north as southern California. The louvar, another South Pacific fish, was found by beachcombers in northern Haida Gwaii in 2014.

Jordan River resident Donovan Ray discovered the spotted porcupine while he was down at the beach building sandcastles with his daughter.

“I saw the fish just sitting in the kelp. It was still in good condition. I thought: ‘Cool. It looks like a pufferfish.’ Then I thought: ‘Hmm. We don’t usually get those things here.’ ”

Ray, 49, was impressed by how intact and fresh the specimen was. And fortunately, because he had travelled around the South Pacific, he immediately knew it was poisonous.

Most pufferfish species are toxic and some are among the most poisonous vertebrates in the world. In certain species, the internal organs and sometimes their skin contain a poison called tetrodotoxin. The poison is highly toxic to most animals.

“I’d eaten one with a family in western Samoa and they put on a big spread and they had all kinds of exotic things. They knew how to eat it. They pulled spines off the body and sucked the juice out. They were super-careful with it and passed me little bits to eat.” After taking some photographs, Ray buried the fish under rocks to protect it from scavengers and dogs.

“I didn’t want an eagle or a dog or a child to come in contact with it,” he said. “I knew for sure if a predator started chewing it, it wouldn’t be good.”

Ray sent photos to the Times Colonist that were forwarded to Ocean Wise and other scientists, including Hanke.

Hanke asked Ray to dig the fish up and bring it in. Both are thrilled with the discovery.

The RBCM collection provides a baseline for what was here in the past and what’s here now to allow scientists to detect changes, said Hanke. The specimens are available to scientists around the world.

“What we’ve found in deep water are cold-water adapted fish that probably have always been here, so that’s not a big deal. But we’re trying to detect change,” Hanke said.