This rare tropical sea turtle was rescued in B.C. waters

Members of the public rescued a rare tropical sea turtle that usually inhabits tropical waters and was discovered in Port Alberni on Sept. 30.
0
Oct 3, 2019 3:03 PM By: Elana Shepert 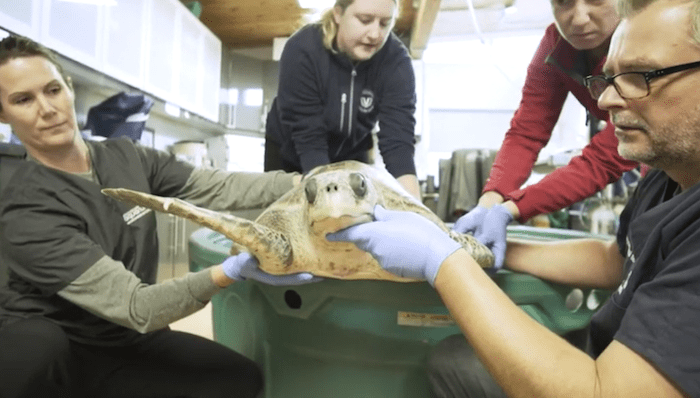 Members of the public rescued a rare tropical sea turtle in Port Alberti on Sept. 30 that usually inhabits tropical or sub-tropical waters.

The turtle was transported to Parksville by representatives from Fisheries and Oceans Canada to meet members of the Vancouver Aquarium’s Marine Mammal Rescue Centre (MMRC) team.

Nicknamed "Berni" by staff, the 26.9 kilogram turtle is only the fourth olive ridley sea turtle recorded in B.C. waters. The olive ridley sea turtle is classified as vulnerable worldwide by the World Conservation Union (IUCN) Red List. Its mass nesting behaviour, called “arribada,” is often seen in nature documentaries; thousands of females gravitate to the same few beaches to lay their eggs in conical nests.

Since turtles are cold-blooded creatures, they depend entirely upon their environment to regulate their body temperatures. And, when the surrounding environment is too cold, the sea turtles become hypothermic. This is life-threatening to turtles, because their heart rate will go down and they can't swim or forage for food. Since they are unable to swim, they also become an easy meal for predators.

So, why would a sea turtle that usually inhabits tropical waters swim up to Canada?

Dr. Martin Haulena, Ocean Wise head veterinarian, thinks that the reappearance of "the blob" may be culprit.

The blob - an expanse of unusually warm water has been tracked stretching all the way from California to Alaska - can affect animal migration and also hurt everything from the smallest organism to the largest marine mammal.

“That’s really important at a primary level, because it allows algae and other nutrients to form and metabolize up the chain, up the ecosystem," says Haulena.

“Once he’s stronger and showing signs of responsiveness, staff will place him in a pool set at the same temperature as his body for short periods of time,” said Lindsaye Akhurst, manager of the Marine Mammal Rescue Centre.

“Berni has a long road to recovery but he is responding to treatment. Once he's stabilized, we will work closely with Canadian and U.S. authorities to get the permits that allow him to be released, in warmer waters."

Staff will continue to closely monitor Berni and administer fluids to treat dehydration. Additional diagnostic testing, including bloodwork, ultrasound and radiographs, will also continue over the coming days. Cold-stunning can result in pneumonia, so Berni is also being treated with antibiotics.