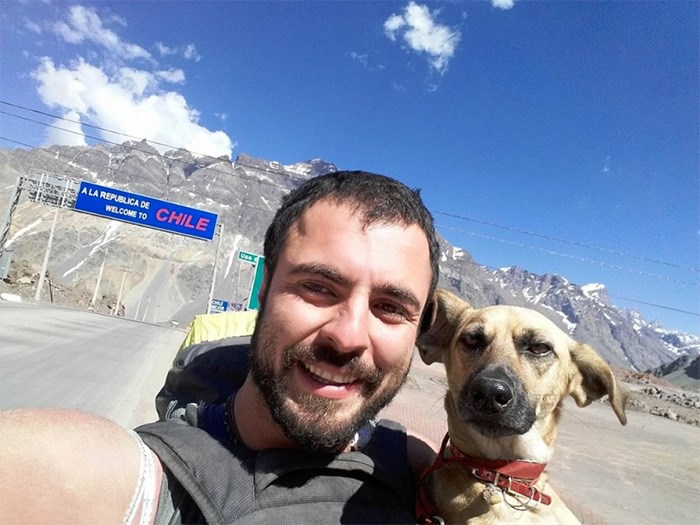 A Burnaby filmmaker wants to bring awareness to Chile’s stray dog population with a new documentary.

In 2015, Montreal-born Thommy Morais moved to Ecuador for a year. It wasn’t too long after he noticed a large number of stray animals roaming the streets. Some reports suggest there are 2.5 million stray canines in Chile.

“It is terribly bad. Some places are filled with dogs. It’s affecting other animals, it’s affecting people, it’s crazy,” he told the NOW. “We have some images that ... we almost don’t want to show the images.”

While abroad, Morais, who moved to Burnaby in January, met Chilean Thomas Hartung.

Hartung had adopted a street dog named Popi and had started a blog called Viajando con Pulgas, which is Spanish for “travelling with fleas.”

“At first it was just a blog,” said 23-year-old Morais. “The blog got a little bigger, got a lot of attention while travelling, lots of interviews, and then I came back to Canada and we talked about it, and we were like, ‘Let’s film more. Let’s do a documentary.’”

Stories with Fleas was born. The doc, which is produced by Morais and directed by Hartung, follows Hartung and Popi.

“We kind of show the contrast of how bad (the stray dog population) is, as well as showing Popi, that it’s possible to give a good life to a street dog. Then we visit shelters or just people that help dogs. We show what people do,” Morais said of the storyline.

The hope is to bring awareness to responsible animal adoption.

“A lot of people get a dog and they don’t take care of them. Unfortunately, they put them on the street. In South America, they don’t have the money like we do. There’s no SPCA or there’s no actual business taking care of animals that is funded by government,” he explained. “If you’re going to get a dog, it’s not just an object. You gotta be ready, make sure you have the financial (ability) to take care of it, just like a baby.”

Morais still needs to film the second half of Stories with Fleas. He and a crew will be heading down south next month to continue their work.

But before then, on Nov. 11, he’s hosting a fundraiser at The Great Bear Pub in Burnaby (5665 Kingsway), starting at 6 p.m. Money raised during the event will go toward supporting the documentary.

Oh, and if you’re a fan of the Netflix show, The 100, some of the cast members will be in attendance. Morais works on the set of the show as a dolly grip.