While advertised as a children’s book, the 40-page read, Rescuing Rialto: A Baby Sea Otter's Story is a tale all ages can enjoy and learn something from.
Apr 14, 2019 9:03 AM By: Elisia Seeber

If you’ve visited the Vancouver Aquarium lately, you may have seen Rialto happily rolling around in a big tub of ice – that’s his favourite treat. 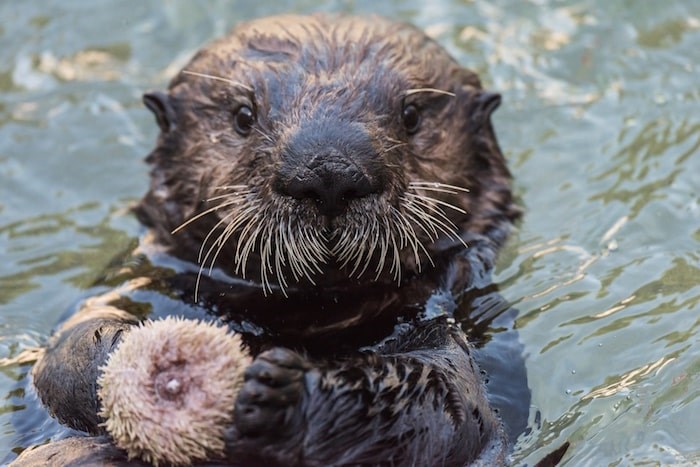 He's the second biggest sea otter at the aquarium, weighing in at a healthy 30kg. But not so long ago, things were very different.

When Seattle Times photographer Alan Berner first pointed his camera lens on Rialto, he was just “a little puff ball.”

It was August 2016, and Berner and journalist Lynda V. Mapes had been invited to the Seattle Aquarium to chronicle efforts to take care of and rehabilitate a tiny, and seriously ill, baby sea otter. The pup had been found stranded and alone on the remote Rialto beach at the edge of Olympic National Park in Washington State. He was emaciated, had pneumonia and a gastrointestinal infection. 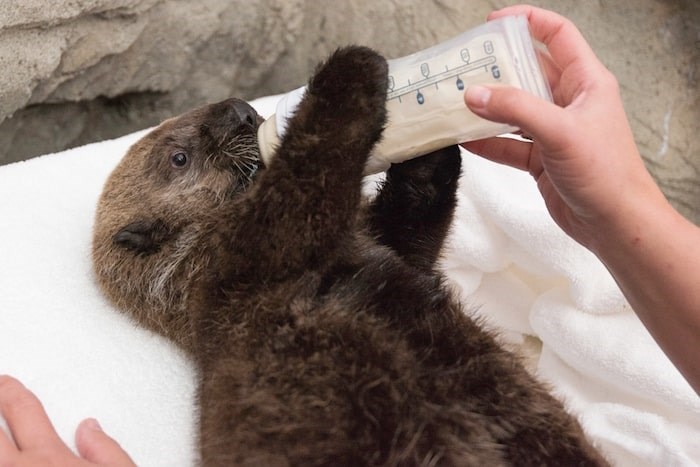 At this point in his young life, the otter had less than a 10 per cent chance of survival. Despite his slim chances, the team at Seattle Aquarium didn’t give up.

“We were promised full access no matter what happened,” Mapes, who has been an environmental reporter at the Seattle Times since 1997, told the Courier.

And so, having fallen for the adorable puffball within seconds of seeing him, the duo began to bring the world the miraculous, and heartfelt, story of little Rialto’s recovery - with the full backing of their "animal loving" city editor, Matt Kramer.

They visited the otter twice a week, or more, to follow his every improvement. 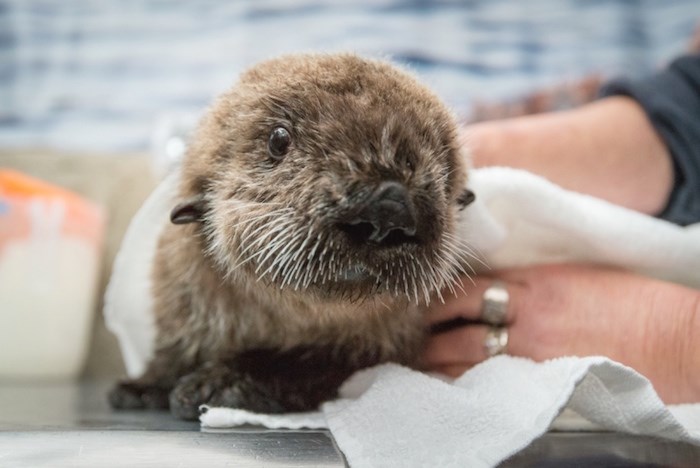 “We went quite a lot, partly because we needed to because he was changing so fast and also because it was fun,” Mapes said with a heightened excitement in her voice, over a phone chat.

“We cover a lot of doom and destruction and bad news so it was delightful to be involved in this story because he quickly got better.

“It was our escape. We’d each get a twinkle in our eye going to see Rialto.”

When the duo first visited little Rialto, he was fragile, uncomfortable and screeching a lot, recalled Mapes.

“But by the very next time, we came back and he was gaining weight and doing better and having his first swim,” she said. 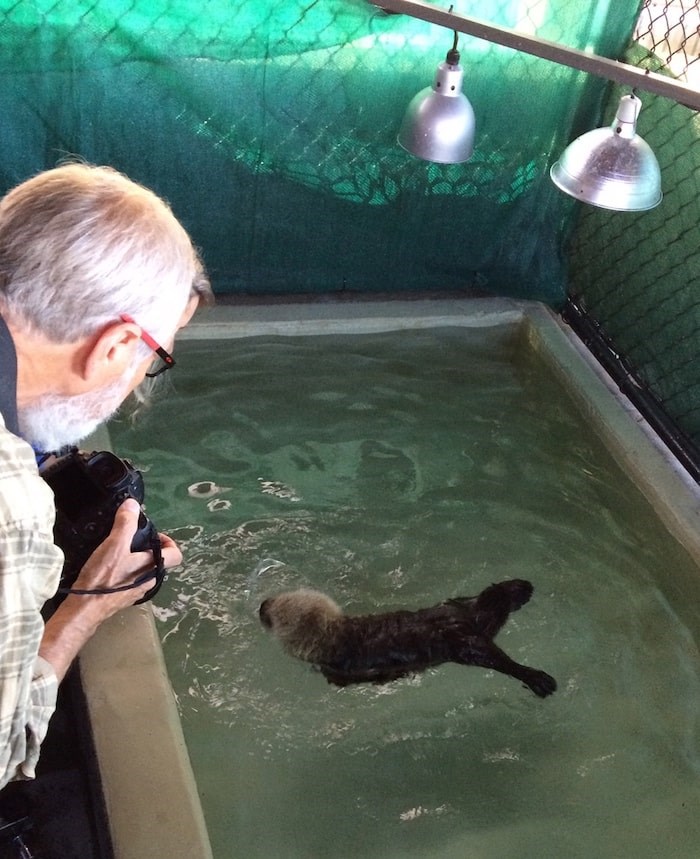 “It very quickly became a fun story about this charming little animal. He was completely irresistible. He had a real personality and he had a hell of a voice – I’ll tell you that.”

On his journey to health, the incredibly cute little mammal captured worldwide attention and even had GIFS made about him.

After more than six weeks of 24-hour care at the Seattle Aquarium, by staff that included a rotating team of specialists from the Vancouver Aquarium, Rialto began to thrive.

Berner, an award-winning photographer with 40 years experience under his belt, said having great access at Seattle Aquarium made the experience of covering the story all the more special. 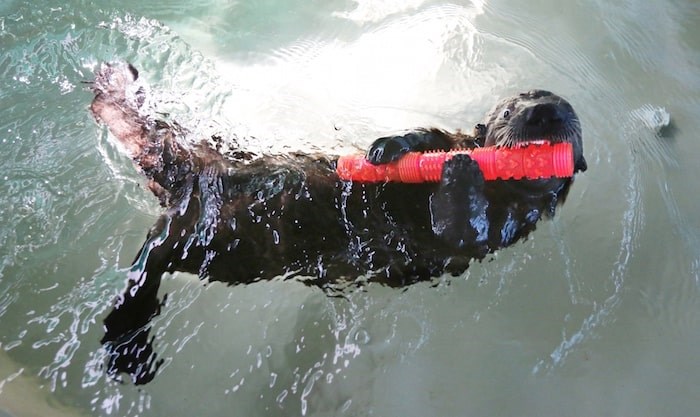 Rialto the rescued sea otter at the Seattle Aquarium is bigger, stronger, swimming on his back, diving and playing with his numerous toys. Photo by Alan Berner/The Seattle Times

“Rialto responded to the people who were caring for him 24 hours a day, they showed remarkable commitment, and he would respond to us,” Berner said.

“I felt that he recognized me and responded. We bonded and connected. It’s true.”

Mapes agreed, and added that some of her favourite moments were watching the interactions between Rialto and Shawn Larson, animal health and conservation research coordinator for Seattle Aquarium.

“Otters' paws are sensitive, just like a cat, and so Rialto would take his paw and place it against the bottom of her cheek so he could feel her skin and look into her face,” she said.

“I mean, you can’t interpret that any other way but affection and it was a beautiful thing to see." 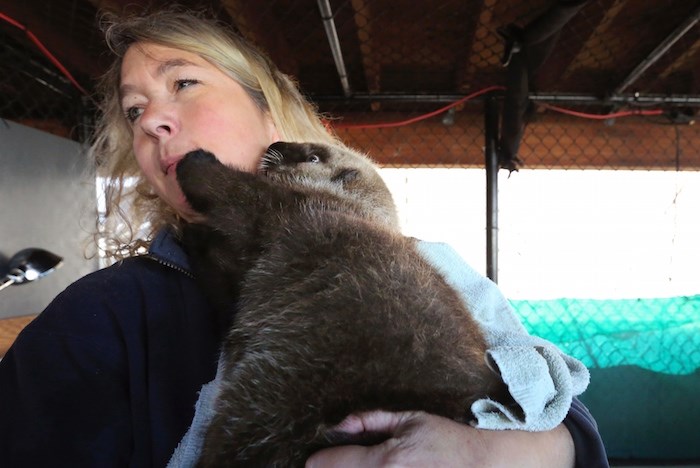 It’s moments like this that made it easy for Mapes to agree to write a book about Rialto’s recovery, when McMillian Publishers reached out via email.

“For me I enjoyed the hopefulness of this story, I enjoyed the human animal bond and seeing the magic of that and being reminded of how primal that is,” she said.

While advertised as a children’s book, Mapes said the 40-page read, Rescuing Rialto: A Baby Sea Otter's Story is a tale all ages can enjoy and learn something from.

Having already spent months covering Rialto’s journey, it only took Mapes a week to complete the book.

There’s a lot of information about the conservation story of sea otters to take in, but Mapes also hopes the book will inspire readers to think a little deeper about nature.

“I hope they’ll think about the mystery and the magic of how everything in nature is connected,” she said.

“There’s no one piece that doesn’t matter. Everything has a place.”

Seattle Aquarium didn’t have room for another male otter and so on Sept. 19, 2016, Rialto made the trip north to his forever home at the Vancouver Aquarium, where he was welcomed with open arms. 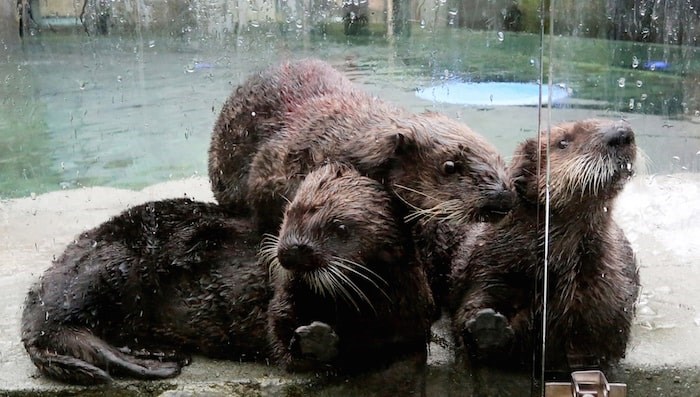 “He was a super star in Vancouver right away,” Berner said.

"It was a success story, which is terrific. He’s a thriving youngster now with companions in Vancouver. It’s just a great story."

Mapes also took a moment to mention the important role aquariums play and the vital need to support the work they do.

“I encourage people to think more about the role of these certified aquariums, they’re not all roadside attractions, these are professional operations, and they’re guided by serious people with scientific expertise,” she said.

Put simply she said: “If they didn’t have a place like an aquarium for Rialto to go to he would have been euthanized.”

The two animal lovers were at Vancouver Aquarium on Saturday morning for a special book launch and reading event.

They had’t seen Rialto since a visit back in 2017 and said they were excited to see if he remembered them, how big he was and how he interacted with the other animals.

Rachel Nelson, marine mammal trainer at the Vancouver Aquarium, said they were sure to see a huge difference in Rialto.

“He was the baby of the group. Now he's the second biggest otter! Rialto weighs 30kg. The biggest otter, Mak, weighs 31kg,” she said.

Nelson said Rialto was quite social with the other otters and spent his days eating, sleeping, grooming and playing.

Basically the life most celebrities lead...

In light of the book launch, the aquarium has also released a video of Rialto's top cutest moments: