A river otter’s life came to a tragic end in an illegal fishing trap on New Westminster’s waterfront.
Jun 12, 2019 11:54 AM By: Theresa McManus

A river otter’s life came to a tragic end in an illegal fishing trap on New Westminster’s waterfront.

Queensborough resident George Holm was walking on the boardwalk with his dog Zoe on Sunday when he came upon an upsetting scene at the west end of the boardwalk, near the children’s playground. 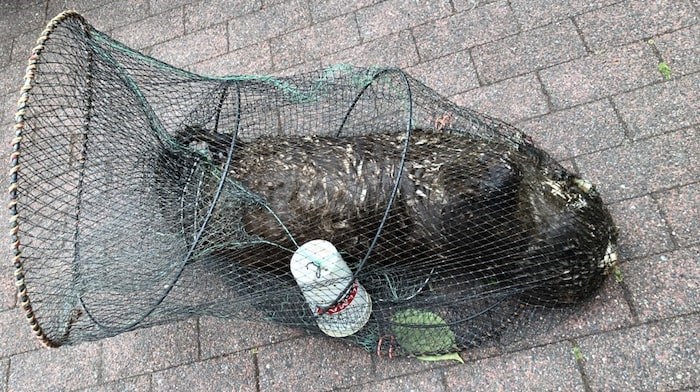 The City of New Westminster animal control services pulled a dead river otter caught in an illegal fish trap from the river on Sunday. Photo contributed.

“An animal control officer was dragging what at first appeared to be a sack with something inside, but as I came closer I saw that it was a three-ring and net minnow trap, and inside it was a dead, fully mature otter,” he said. “Someone had baited the minnow trap and set it in the river by the railway bridge where an otter had then smelled the bait and had swum into the trap. With no exit except for the entrance, and unable to turn itself around, the otter had drowned.”

Holm said there were many families enjoying the playground on Sunday afternoon, and he can only imagine the impression the sight of the dead otter may have had on them, especially young children.

“Several people, including myself, asked what it was, and upon hearing that it was an otter that had drowned in a trap I know how upset that made me,” he said.

Holm wants to get the word out about the otter’s death so others won’t try to fish in this manner.

Aaron Hilgerdenaar, the city’s supervisor of street use enforcement and animal services, said a local resident called the city on Sunday morning to report a deceased animal in a trap. While the incident was reported as being a beaver, he said it turned out to be a river otter.

“Although we routinely respond to calls of deceased domesticated and wild animals, retrieving a deceased river otter from a trap in the river is not a normal call,” he said.

Hilgerdenaar said the city has been in touch with the Department of Fisheries and Oceans about this situation. Because river otters are a freshwater species, he said they fall under the responsibility of the B.C. Conservation Officer Service.

Murray Smith, inspector for the Lower Mainland for the B.C. Conservation Officers Service, consulted with the Department of Fisheries and Oceans about the incident.

“Department of Fisheries and Oceans says it is a trap brought from China to catch whitefish in the Fraser River,” he said in an email to the Record. “This type of trap and fish trapping method are illegal under the federal Fisheries Act.” 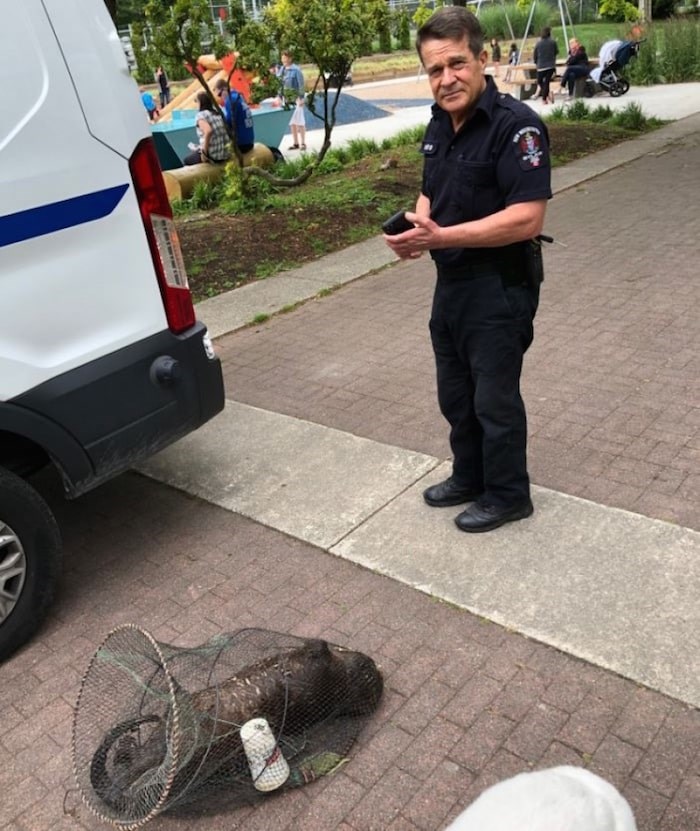 The City of New Westminster animal control services pulled a dead river otter caught in an illegal fish trap from the river on Sunday. Photo contributed.

Anyone with information about the trap is asked to call the B.C. Conservation Officer Services’ Report All Poachers and Polluters (RAPP) line at 1-877-952-7277.

“There are people fishing from the boardwalk almost daily, but they at least use a fishing rod with a line and a baited hook. The person placing the trap in the river, in my opinion, is either too lazy or too greedy to do even that and needs to be identified and stopped before they do it again,” Holm said. “It is also vital to get the word out that this happened just that it is illegal so others won’t also try to fish this fashion.”

While this particular trap was intended for fish, it’s not illegal to trap river otters – under certain circumstances.

“We actually have a trapping season for river otters. It’s between Nov. 15 to Feb. 28. It’s not necessarily designed to trap in the Fraser River and the banks of New Westminster, but there are areas of the Lower Mainland, some of the more rural and forested areas, that we actually do have a season for otter,” Smith told the Record. “First of all, there is enough of a population to sustain a trapping season – the pelts can be used for furs. That’s a lawfully authorized activity under the Wildlife Act of British Columbia.”

While they’re beautiful animals, Smith said river otters can be fairly damaging when they get into spaces at marinas on the Fraser River.

“They are not very well liked by anybody who is in the boating world. So, consequently there is a couple of ways to deal with that. A nuisance trapper will be brought in. If it’s not within the trapping season they may decide to live trap them and relocate them. There’s the authority to do that under the Wildlife Act,” he said. “Or they could, if it’s within the season, they could put a killing trap down and kill the animal and use the pelts. They’d have to have a trapping license. They’d have to take the course and all those kind of things. They’d have to be trained.”