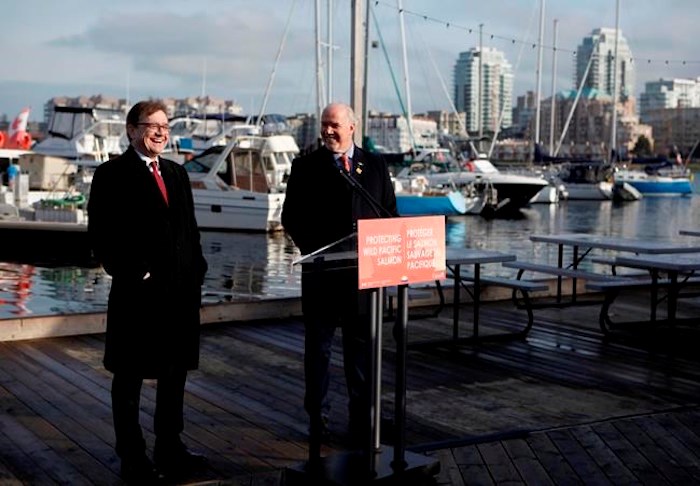 Premier John Horgan and federal Minister of Fisheries Jonathan Wilkinson make an announcement about the Salmon Restoration and Innovation Fund during a press conference at Fisherman’s Wharf in Victoria, B.C., on Friday, March 15, 2019. THE CANADIAN PRESS/Chad Hipolito

Federal Fisheries Minister Jonathan Wilkinson and Premier John Horgan say the two governments will provide $142.8 million towards the program, with the federal government spending $100 million of the total amount.

The B.C. Salmon Restoration and Innovation Fund will be open to conservation, Indigenous and research groups to focus on projects aimed at protecting and restoring wild salmon stocks.

Wilkinson says working together with the province, conservation groups, scientists, and the recreational and commercial fishing industries can protect and enhance wild salmon stocks.

Horgan says all levels of government and industry, Indigenous, conservation and community groups must work together to improve the survival rates of wild salmon, which face threats due to declining numbers and climate change.

Wilkinson and Horgan say wild salmon are deeply woven into B.C.'s cultural and social fabric and the province has a long tradition of fishing.