An English springer spaniel puppy has died on Vancouver Island after eating a death-cap mushroom, the second dog to die in two months as a result of the invasive species.
Oct 21, 2019 7:23 AM By: Cindy E. Harnett 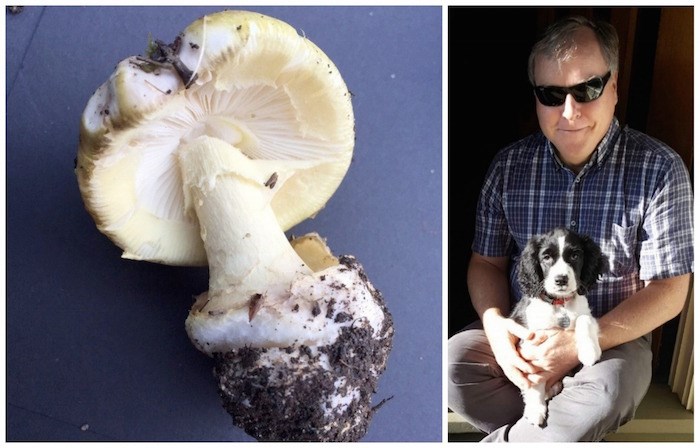 An English springer spaniel puppy has died on Vancouver Island after eating a death-cap mushroom, the second dog to die in two months as a result of the invasive species.

Owner Peter Ronald said his family was aware of potential harms from the mushrooms — they fenced the yard, bought a crate, put up gates, swept the backyard for all mushrooms, took puppy classes and always had 14-week-old Luna on a leash.

On Oct. 4, Luna was vomiting, so the family took her to a veterinarian. From Friday to Saturday, the diagnosis went from “fine by tomorrow” to euthanasia, Ronald said. Tests revealed signs of poisoning.

“I was just floored,” he said. “I was confident the death-cap mushroom was a long shot at best. First of all, I hadn’t seen it anywhere and it’s like getting hit by lightning, isn’t it? What are the chances?”

Thirty-six hours later, despite a battery of interventions, the puppy was dead.

Afterward, Ronald toured his Fairfield property again and found a small patch of greenish-hued death-cap mushrooms in a corner of his front yard — about four metres from a European birch “host tree” across a sidewalk.

“I right away knew what that was,” Ronald said.

A pathologist tested the mushrooms and identified them as Amanita phalloides, commonly called the death cap. The species is not native to B.C. It typically grows under or near imported trees such as hornbeam, European beech, English and red oak, hazelnut, linden and sweet chestnut. It can also be found near native Garry oak trees in urban or rural environments.

Mycologists report easily finding the mushrooms in Greater Victoria locations such as Cook Street Village, Oak Bay and the Uplands. The B.C. Centre for Disease Control says they are known to be on Vancouver Island and the Lower Mainland.

“These mushrooms are here and they are proliferating,” Ronald said.

Unsure of how to get rid of them, he’s thinking of building a fence in the front yard to protect other pets in the dog-friendly area.

“This should be another wake-up [call] these mushrooms are here, so don’t take this lightly, if you have a dog,” Ronald said. “Vigilance is our only defence in this case.”

Puppies are at risk because they experience everything through their noses and mouths.

“I didn’t see it. I don’t know how or when, but it must have been within 24 hours of her falling ill,” said Ronald. “But we know this is what happened, even if we didn’t experience it.”

In mid-September, a 16-week-old puppy was reported to have died after eating a death-cap mushroom.

On Sept. 24, Island Health warned people in Greater Victoria that the mushroom was fruiting.

In 2016, a three-year-old child died after eating a death-cap mushroom picked on a Victoria boulevard. Island Health issued warnings at that time, also.

Up to 30 per cent of people who eat a death cap will die, according to Island Health. Liver transplants are a often a necessary life-saving procedure. Early treatment in hospital is essential.

Death-cap mushrooms have telltale characteristics that set them apart from other fungi, including a greeny-bronze cap, a veil around the stem, white gills and a large bulb under the ground.

The mushroom’s toxins damage the liver and kidney. Symptoms such as cramping, abdominal pain, vomiting, diarrhea and dehydration usually occur within six to 12 hours after consumption, according to the B.C. Centre for Disease Control.

Those symptoms can fade before returning more severely within 72 hours, leading to severe illness and organ failure.

“It’s too late at that point,” Ronald said.

Island Health says death caps can be lethal for humans and pets. The health authority suggests including the underground bulb when removing them, and disposing of them in the garbage, not the compost.

What to do with death cap mushrooms

If you suspect that you have consumed a poisonous mushroom:

If you see death-cap mushrooms, report it to: