VIDEO: Snake yoga is a thing and it's coming to Vancouver

It’s not known if the postures, or “asanas,” take on new names such as downward cobra, but this much is clear: snake yoga is a thing and it’s coming to Vancouver for the first time soon.
Nov 30, 2018 1:19 PM By: John Kurucz

A casual stroll through the park with Rover simply won’t do in Tristan Risk’s world.

Dogs, after all, are a bit easy. And merely walking to get exercise is so 2017.

Instead, Risk gets her chakras aligned and her daily sweat on with the help of Eros, a nearly six-foot-long albino boa constrictor. 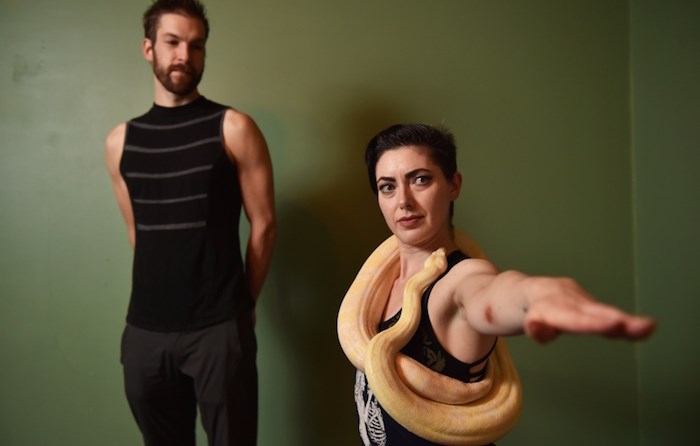 It’s not known if the postures, or “asanas,” take on new names such as downward cobra, but this much is clear: snake yoga is a thing and it’s coming to Vancouver for the first time Jan. 8.

“These are snakes that are easy to work with and they’ll go with the pace of the class — they’re not going to rear up like a cobra would rear up at you,” Risk said. “The whole idea is for the snake to serve as a really grounding force and help you be more aware of your movements and help you concentrate.”

As it turns out, Risk has had a lifelong affinity with things that go bump in the night. She’s a burlesque dancer and, alongside her partner “Burns the Dragon,” (real name: Josh Burns), Risk heads up the Carnival of Curiosities, a collective from across the city featuring circus performers, dancers and other unusual characters.

Risk incorporated snakes into her burlesque routine three years ago and owns a handful of boas and pythons with names such as Yoshi, Peach and Gamora.

Putting the two together came by way of a couple viral videos that hit the internet earlier this year, which showed others giving the serpentine session a go. Risk was already a yogi, she already owned snakes and she’s been a performer her entire adult life.

It was a match made in heaven or, at the very least, in the Garden of Eden.

“The more people I meet, the more I like snakes,” Risk said. “I can relate to snakes better.”

The location of the class hasn’t been determined and will likely happen in a private studio somewhere in Vancouver.

The format, however, has been set. The class will be led by Instructor Lukas Knab along with three spotters/snake handlers. Capacity will be set around 15 participants and B.Y.O.S. — bring your own snake — is definitely in play.

Six to eight snakes will be provided, ranging in size from three to six feet in length. All of them will be boa constrictors or pythons — no venomous snakes will be allowed — and the class will slither along for about 90 minutes.

“There will be a little time left at the end if you just want to snuggle the snakes,” Risk said. “Usually, for about 10 minutes after the class, everyone wants to hang out with the snakes, snuggle and take photos.”

Despite her surname, Risk says safety won’t be an issue. A handful of handlers will be on site and all the snakes will be domesticated breeds. The first 10 minutes of the class will be devoted to snake handling 101.

“Nobody has to worry about dodging poison coming from any cobras or anything like that,” Risk said. “The smaller ones move faster and the larger ones are a little bit slow, so people can choose their own adventure there.”

The event page went live on Facebook two weeks ago and the initial interest was a bit brisk. As of Nov. 30, 11 people were going while another 140-plus were interested.

Which begs the question: who are these people?

“We’ll probably see a lot of millennials,” Risk said. “Because we live in Vancouver, you can’t invest in real estate so you invest in experiences. A lot of people are interested in doing things that are offbeat because we are Vancouver and we’re kind of like that.”

If you’re game to meet Gamora or get touchy-feely with Eros, the event page can be found HERE.