Watch this huge tarantula shed its exoskeleton at a B.C. insectarium (VIDEO)

A 20-centimetre tarantula capable of killing a bird has been filmed at its most vulnerable state shedding its armour-like exoskelton at a Victoria-area tropical jungle insectarium.
0
Jun 17, 2019 9:50 AM By: The Canadian Press

VICTORIA — A 20-centimetre tarantula capable of killing a bird has been filmed at its most vulnerable state shedding its armour-like exoskeleton at a Victoria-area tropical jungle insectarium. 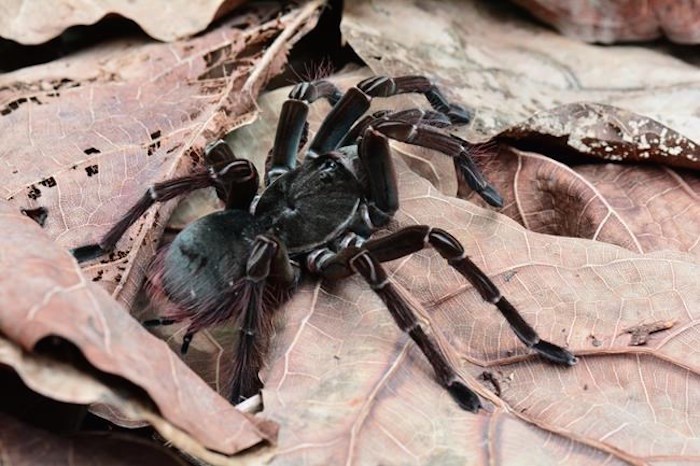 A 20-centimetre tarantula, shown in this undated handout photo, capable of killing a bird was filmed at its most vulnerable state shedding its armour-like exoskelton at a Victoria-area tropical jungle insectarium. Justin Dunning, Living Collections Manager at Victoria Butterfly Gardens, says after four years of trying he was able to capture on film the 10-hour molting process of his Burgundy goliath bird eater tarantula, which he reduced down to about two minutes of raw intensity through time-lapse video. THE CANADIAN PRESS/HO-Victoria Butterfly Gardens

He reduced the video footage to about two minutes through time-lapse video.

"The first eight or nine hours of that time lapse was nothing but her lying on her back," he said. "As a tarantula gets larger she gets tighter in her exoskeleton. She'll make a sort of web hammock and then she flips on her back and she actually sheds her exoskeleton."

The process is somewhat horrifying and fascinating at the same time, said Dunning, describing how the tarantula crawls out of its shell, discards it and is then left as a soft, almost jelly-like being.

"That's the most vulnerable time for a tarantula's life," he added.

Female tarantulas go through the moulting process about once every 10 months until they fully mature, Dunning said. They can live to be 25 years old.

He said the goliath bird eater at the Butterfly Gardens is about nine years old and has been his pet for about six years.

Dunning calls her Stirmi after her scientific name, Theraphosa stirmi.

He said he dropped by the Butterfly Gardens to check on the filming process during the moult.

"I was so pumped," Dunning said. "I came in the next day and saw she looked all perfect. A lot of stuff can go wrong when a tarantula moults."

The tarantula lives in tropical jungles and is usually found in tunnels in the jungle floor. Although it is a venomous spider, its bite doesn't kill humans but it will cause pain and swelling similar to a wasp sting.

"Their regular diet would be beetles and crickets and worms and different invertebrates," Dunning said. "But it's been documented in numerous occasions of them eating lizards, mice, other vertebrates, birds, even snakes. One could take out a small rat."

Dunning said he expects to set up his camera again within the next 10 months to capture the next moult.