A water skiing squirrel with a 40-year legacy of aquatic entertaining is stopping in Vancouver in 2020 as part of the Vancouver International Boat Show.
0
Oct 28, 2019 10:58 AM By: Lindsay William-Ross 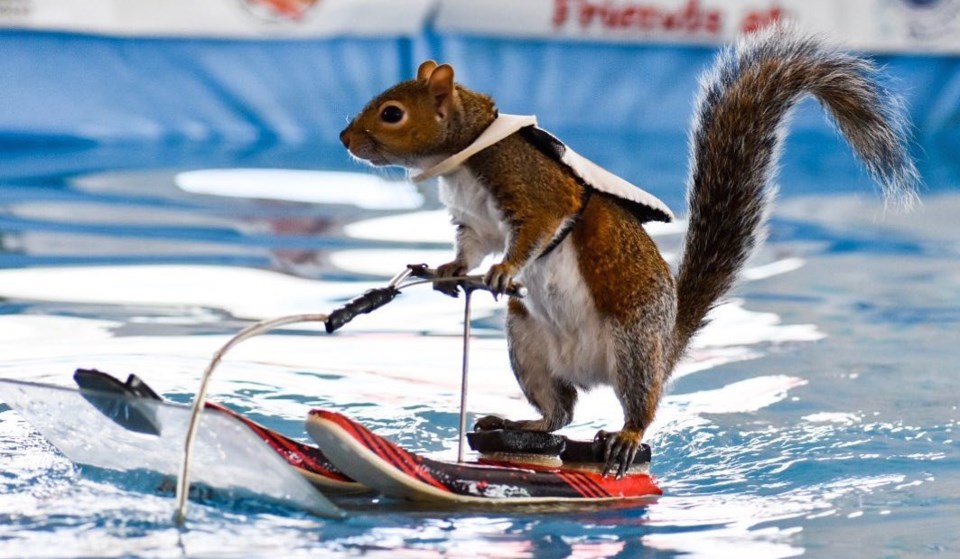 Twiggy, a water skiing squirrel with a 40-year legacy, will entertain and inform spectators daily at the 2020 Vancouver International Boat Show. Photo: @twiggysinc/Instagram

You might have to just see this to believe it: A water skiing squirrel with a 40-year legacy of aquatic entertaining is stopping in Vancouver in 2020 as part of the Vancouver International Boat Show.

Twiggy, fresh out of retirement after 39 years, is back in the water, and ready to thrill and educate fans and fresh faces.

Not familiar with the history of Twiggy? It's pretty impressive.

Twiggy was a rescued squirrel adopted in 1978 by Florida couple Chuck and Lou Ann Best. As a joke, Chuck Best taught Twiggy how to water ski on a remote control boat he'd bought for his daughter. Soon after, the media came calling, and in September 1979 Twiggy started performing in shows all over the world.

Sadly, Chuck Best passed away in 1997 when he suffered a heart attack while rescuing his drowning stepfather, putting a stop to Twiggy's touring. The next year, when a squirrel showed up at Lou Ann's sliding glass door, she took it as a sign to give Twiggy a go again, and Twiggy IV hit the water, this time with an emphasis on teaching water safety.

Lou Ann retired in 2018, but Chuck Best Jr. took up the family business and has reimagined Twiggy's show, and has been on tour since 2019. Plus, now Twiggy gets to be a social media star - you can follow her and her pals' adventures on Instagram.

Twiggy arrives in Vancouver for the Boat Show, and will be there performing daily during the show's five-day run. This show is full of laughs, surprises and even features a special guest, Roxie, as Twiggy’s trusty lifeguard.

The Vancouver International Boat Show will include more than 250 exhibitors, providing boat enthusiasts with a first look at the 2020 boating season’s premiere boat models and accessories - and include over 125 presentations and workshops led by boating experts.

And, of course: Twiggy the water skiing squirrel!

Where: BC Place (and the floating show at Granville Island)