So basically there was my life before I met the urban chickens and my life after I met them. It's so much better now.
Jul 9, 2009 11:00 AM By: Bob Kronbauer

So basically there was my life before I met the urban chickens and my life after I met them. It's so much better now.

The urban chickens cluck in my neighbourhood and, as I suspected, they do it a mere 4 blocks from my home in beautiful Mount Pleasant. What I didn't suspect was that I had been walking right by them almost every couple of days though; they're quietly nestled into the backyard of some good people, a couple named Sam and Alex.

Over the coming days I'll be sharing some of the photos I took on my first visit along with some of the information that I gleaned about farming chickens in the city. Over the coming months I'm hoping to keep visiting and reporting on these fine, feathered friends of mine. 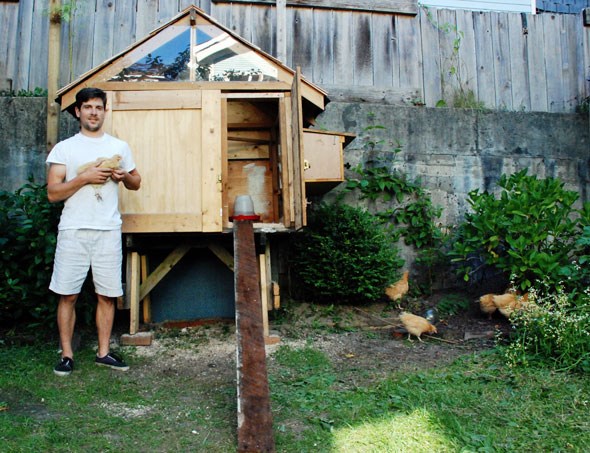 This first picture is of Sam standing in front of the coop that he built with mostly found/reclaimed materials. I asked him where he got the plans to build it and he said he didn't go off of plans, he just went ahead and built the thing. It isn't quite finished yet but, man... nice work, Sam!

Burnaby family challenging $400 fine for backyard chickens
Jul 29, 2020 7:52 AM
Comments
We welcome your feedback and encourage you to share your thoughts. We ask that you be respectful of others and their points of view, refrain from personal attacks and stay on topic. To learn about our commenting policies and how we moderate, please read our Community Guidelines.