Staff rescued a sea otter, saved a sea lion and released a sea turtle back to the wild—all in just one weekend!
Sep 10, 2020 8:09 PM By: Megan Lalonde 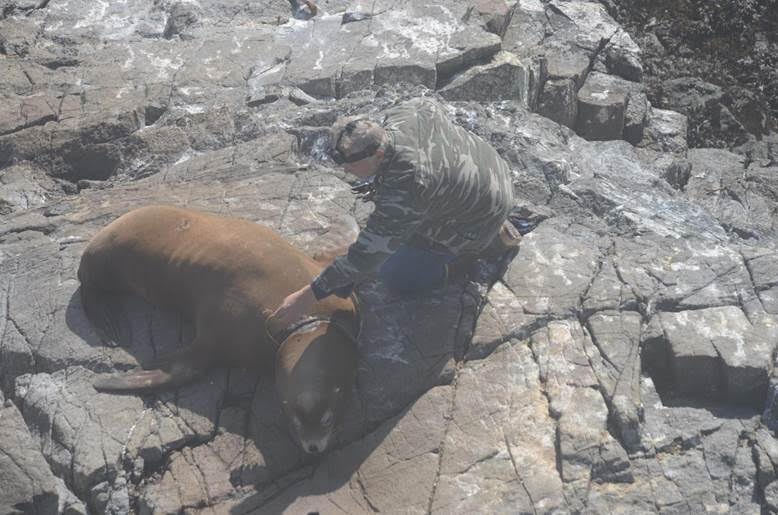 The Ocean Wise Marine Mammal Rescue Centre had an action-packed start to the month.

Staff from the Vancouver-based Rescue Centre, alongside representatives from Fisheries and Oceans Canada, were initially dispatched on Sunday to respond to reports of several sea lions who were seen entangled in fishing gear and packing straps.

One struggling sea lion in particular was first spotted by Mara Radawetz, who lives in the decommissioned lightkeepers’ residence at Race Rocks just off the southern tip of Vancouver Island. Radawetz, who monitors the Race Rocks Ecological Reserve with partner Kai Westby, saw the sea lion several times during the week in nearby Juan de Fuca Strait and said the animal was clearly in distress.

“He was scratching constantly at his wounds, which were cutting into his skin,” ­Radawetz explained.

She contacted Fisheries and Oceans Canada and the Marine Mammal Rescue Centre to help free the sea lion from the plastic packing band wrapped around its neck.

But before the rescue teams could even begin helping the sea lions, the Centre received a second report from Parks Canada about a severely injured sea otter spotted on a beach in Vancouver Island's Pacific Rim National Park.

According to a release from the Rescue Centre issued Thursday, the veterinary team split up as they "raced the clock" to attend both wildlife emergencies while the weather remained favourable.

Two large Zodiac boats ­carrying the rescue team and several veterinarians arrived to Race Rocks Sunday morning, according to Westby, and quickly found the injured sea lion. The Rescue Centre's head veterinarian, Dr. Martin Haulena, gave the animal a tranquilizer ­injection, following which the sea lion was brought onto the shores of Race Rocks and treated.

“It is always incredibly sad to see an animal in pain and distress and even worse when the cause of their pain is because  of humans,” said Lindsaye Akhurst, the Marine Mammal Rescue Centre's manager, in the release.

The plastic band was removed from the sea lion's neck and tracking tags were attached to the animal’s front flippers. A blood sample was also taken to assist with future studies. After being given a drug to reverse the effects of the tranquilizer, the sea lion was back swimming within minutes, Westby said. “It was great to see them help out an animal that was in such great pain,” he added.

But as these rescue efforts for the entangled sea lion were unfolding at Race Rocks, the sea otter was simultaneously being flown to Vancouver by Harbour Air for treatment.

“It certainly made for a busy weekend,” said Haulena, adding that Centre staff are now busy working on getting "the new patient," named Arlo, stabilized.

"He’s unable to use his hind end well and at least one of his paws is in bad shape. Unfortunately, preliminary tests indicate severe liver damage and more complex diagnostics are required to l have a better understanding of what may be wrong with him," Haulena said. "I am quite concerned for him."

The young male sea otter was reportedly named after a Parks Canada staffer who helped facilitate the rescue efforts and the otter's transportation. Arlo the otter is currently being treated with a variety of medications, fluids and a diet of squid, clams, and prawns.

In case these two rescues weren't enough, this weekend also saw the Marine Mammal Rescue Centre team happily send off ‘Berni Stranders’, the rare, "cold-stunned" sea turtle who was found in Port Alberni last fall and rehabilitated at the Vancouver Aquarium, back to the wild.

According to the Centre, Berni was released back to warmer waters off the coast of San Diego, to the delight of his care team.

“This is why we do the work we do—it’s such an amazing feeling being able to give animals like Berni a second chance,” Haulena said.

With each wildlife welfare emergency intervention the Centre is involved in, the goal is to rescue, rehabilitate and release the animal, Rescue Centre staff explained. Anyone who sees marine wildlife in distress is encouraged to keep people and pets away and call the Ocean Wise Marine Mammal Rescue Centre hotline at 604.258.SEAL (7325)  or Fisheries and Oceans Canada incident reporting hotline at 1-800-465-4336.

This orphaned otter pup is moving into the Vancouver Aquarium
Aug 6, 2020 1:39 PM
Comments
We welcome your feedback and encourage you to share your thoughts. We ask that you be respectful of others and their points of view, refrain from personal attacks and stay on topic. To learn about our commenting policies and how we moderate, please read our Community Guidelines.