A new tool rolled out earlier this month will help those would-be captains and current mariners alike to avoid collisions with the largest inhabitants of B.C.’s coastal waters.
Feb 27, 2019 3:18 PM By: John Kurucz

Winter doesn’t seem like an intuitive time for being on a boat, but the waters off Vancouver are busy just the same.

While B.C. Ferries and cruise ships go like gang busters in summer months, this is the time of year when professional mariners — ferry captains, tugboat and cargo ship operators — are learning their craft. 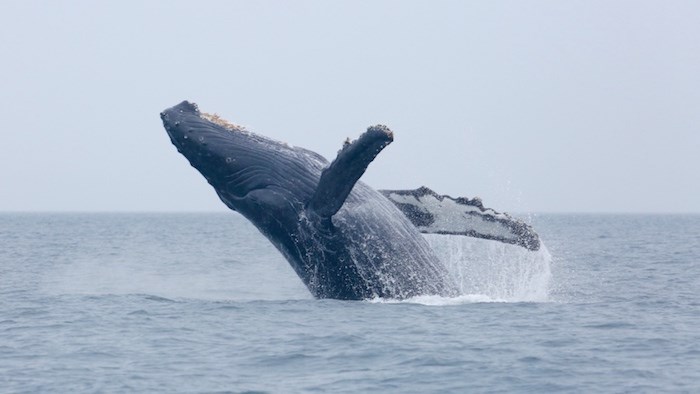 A new tool rolled out earlier this month will help those would-be captains and current mariners alike to avoid collisions with the largest inhabitants of B.C.’s coastal waters.

Introduced on Feb. 15, Whales in Our Waters is a free online tutorial designed to help anyone operating a boat to identify and protect the roughly 30 cetacean species — whales, dolphins and porpoises — that frequent the south coast.

B.C. Ferries, the Vancouver Fraser Port Authority and Ocean Wise all contributed to the project, which was originally intended to be an in-house tool for B.C. Ferries captains only.

“The tutorial really is aimed at professional mariners and operators of large commercial vessels,” B.C. Ferries spokesperson Mika Desloges told the Courier. “However, recreational and pleasure craft operators would certainly find much of the information quite useful and insightful.”

Thirty collisions between cetaceans and vessels were investigated by Fisheries and Oceans Canada from the period spanning 2004 to 2011. The collisions involved orcas, humpback, grey and fin whales and harbour porpoises. Humpbacks were struck most often and the majority of those collisions happened off the west coast and northeast tip of Vancouver Island.

Fin whales and humpbacks, two of the largest marine species in B.C. waters, are more susceptible to collisions because they feed near the surface along established shipping lanes.

Late last year, a dead humpback washed up near Tsawwassen with wounds consistent with a vessel strike. In the summer of 2017, a humpback collided with a whale watching boat near Victoria, injuring two people on board.

While 30 collisions were verified and investigated, the actual total is believed to be far higher, according to a 2017 port authority study. That’s because those incidents were largely reported by people operating boats under 15 metres in length — a boat of that size has a better view off the bow and the collision would be noticeably felt.

“Many strikes undoubtedly go undetected, especially by large vessels or with small species, or unreported, resulting in an underestimation of this threat in B.C.,” the report reads.

“Through this tutorial we are hoping to provide a consistent platform for folks on the West Coast, both in B.C. waters and in Washington state waters, so that the same guidance and information is provided to all mariners,” said Orla Robinson, manager of the port authority’s Enhancing Cetacean Habitat and Observation program.

Reporting contact with a marine mammal is mandatory immediately after an incident occurs. Anyone on the water is also required to report sea life that’s entangled or distressed to Fisheries and Oceans Canada.

The best preventative measure boaters can take when cetaceans are spotted is to reduce speed to 10 knots or less. A gradual change of course is also recommended.

In the case of B.C. Ferries, a dedicated spotter is on the bridge to help the captain with seeing everything on the water. If whales are seen, all mariners within 10 nautical miles (18.5 kilometres) are notified and captains have the choice to alter course or stop the ship entirely.

“We go to great lengths to responsibly share coastal waters with marine life and we record and report this information,” Desloges said. “We have no confirmation that a whale has died as a result of contact with a B.C. ferry. We do everything we can to avoid this from happening.”

The tutorial is available online.