Vicious raccoon attacking people and their dogs in North Vancouver

A Lower Lonsdale woman is warning the neighbourhood after she and another woman, as well as their dogs, were attacked by a vicious raccoon.
Aug 15, 2019 11:15 AM By: Brent Richter 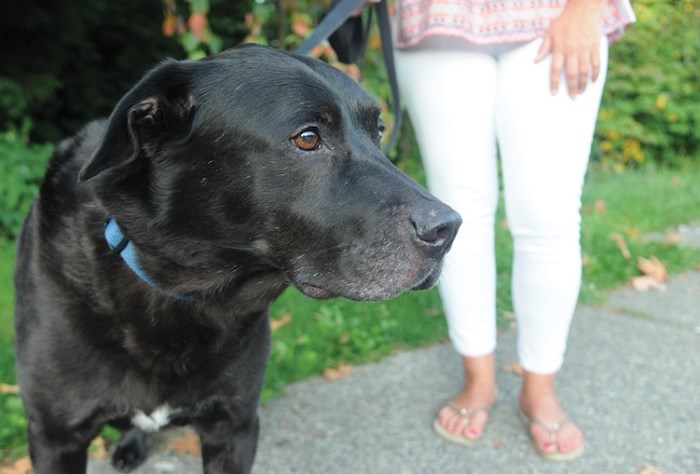 Coal, a 12-year-old Lower Lonsdale black lab, had to be taken to the vet after fending off a raccoon attack, Tuesday. Photo by Mike Wakefield/North Shore News

A Lower Lonsdale woman is warning the neighbourhood after she and another woman, as well as their dogs, were attacked by a vicious raccoon.

Jane Doherty was walking her 12-year-old black lab Coal on the 300 block of East Third Street near Emerald Park early Tuesday morning when they were caught in the melee involving the raccoon with a neighbour and her Chihuahua.

“I heard somebody screaming,” she said. “[The raccoon] had its mouth clamped around her ankle and was not letting go. She tripped and fell into the street.”

Doherty ran to help and tried to fend off the raccoon.

“And then it turned on me and my dog,” she said “I have a number of stitches in one hand and I’ve got puncture wounds on my ankles. The other lady had many more stitches than I did.”

Coal slipped out of his collar and chased the raccoon off, but not before a separate scuffle, requiring a trip to the vet to be treated for a leg injury and puncture wound on his nose.

A neighbour came out and saw the two women bleeding and called 911 to get them some help.

The police responded and helped bandage the women up. Doherty then drove them both up to Lions Gate Hospital for stitches. There, she learned from her neighbour that the attack was unprovoked.

“She was walking down a path, heard some hissing behind her, turned around and this raccoon was launching itself at her,” Doherty said.

Doherty speculates the raccoon may have been feeling protective over its young.

Doherty later reported the incident to the B.C. Conservation Officer Service, hoping they’d send someone to relocate the vicious coon.

“She was very, very aggressive,” she said. “If she’s unprovoked and attacking people just walking down Third Street, that’s a bit concerning.”

But the black and white bandits appear to live in a juristictional grey area. The conservation officer told Doherty that raccoons are outside their mandate and if a property owner has nuisance raccoons, they are expected to call a pest control company to remove them.

Doherty maintains, as long as the city owns Emerald Park, the city should be the one calling the pest control company, but a statement from city says they do not deal with wildlife, which is the jurisdiction of conservation officers.

Raccoon attacks are fairly common, said conservation officer Jillian Bjarnason, especially this time of year when they may be defensive over their food source or their kits.

“If they feel a threat, then they will defend,” Bjarnason said.

The best way to avoid confrontations with a raccoon is to keep your yard free of attractants, Bjarnason said. Dogs should always be kept on a leash, as raccoons have been known to attack, particularly if they’ve been chased by an off-leash dog in the past.