Injured: A white-throated sparrow is being tended to at the Wildlife Rescue Association in Burnaby after striking a window. It suffered head trauma and blood was pooling in its mouth when staff found it.
0
Oct 12, 2017 9:32 AM By: Glacier Media 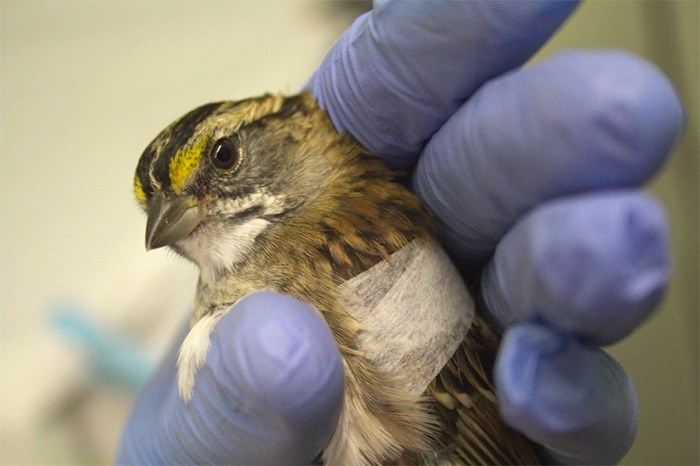 Injured: A white-throated sparrow is being tended to at the Wildlife Rescue Association in Burnaby after striking a window. It suffered head trauma and blood was pooling in its mouth when staff found it. It has since been stabilized but needs more care. Photograph By CONTRIBUTED

Staff saw about 300 wounded birds, including song sparrows, red-breasted sap suckers and some woodpeckers, according to hospital manager Janelle Stephenson.

“This is not normal,” she told the NOW. “Usually, we get a lower number of birds in September. This year, during migration, we found an influx from an average of five animals a day to up to 40 a day.”

Stephenson suspects the higher-than-usual numbers may have to do with the forest fires that burned in B.C.’s Interior this past summer. She said more birds made their way to the Lower Mainland as a result.

“Also, there’s a lot of urbanization in the Lower Mainland. Urbanization is huge, population (increases), habitat encroachment,” she added.

Most of the birds were found outside living room windows or alongside tall buildings, Stephenson noted.

Should anyone come across a wounded feathered friend, the best thing to do is to put it in a box that is covered. Take the box to a quiet, warm area.

“Make sure there’s no kids or pets around that can have access to him. Give him a few minutes to settle down and then bring him into us, or call us on our hotline.”

Stephenson noted, when birds hit windows, it can cause severe head trauma.

“With head trauma, their central nervous system is damaged, and also we do see bruising along the apex of the keel; we see fractures in the wings and shoulders,” said Stephenson. “Often, the secondary injury is that a cat will pick them up after they hit the window because they’re easy prey.”

The influx of birds has “definitely” put a strain on staffing levels at the Burnaby-based animal hospital. Usually, the centre runs with two staff members and between six and eight volunteers. Now, that number is around 16 to 30 volunteers.

“Sometimes we don’t have all the volunteers because they need a lot of training and everything, so sometimes we’ll be lower, but we make it work.”

Stephenson encourages residents to take preventive measures if they see birds smashing into their windows. There are window decals and stickers out there that are clear to the human eye but not to a bird’s eye. Moving bushes, trees and feeders away from windows also helps.

A temporary solution is putting up construction paper or coloured masking tape.