Canadians are keeping a close watch on how the democratic process is unfolding south of the border.
Nov 4, 2020 7:46 AM By: Glen Korstrom 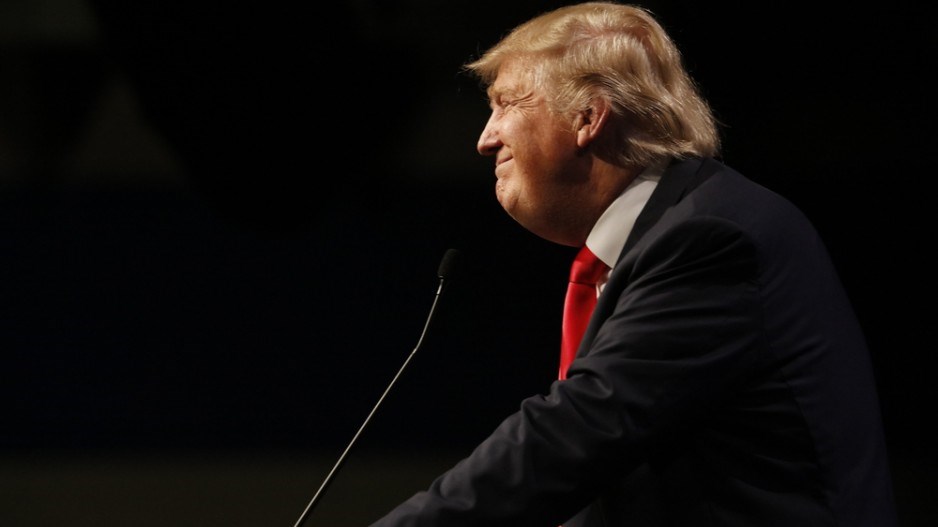 Incumbent U.S. President Donald Trump falsely claimed victory in the 2020 election in a speech that began at 11:30 p.m. Pacific Time. Ballots remain to be counted in several key states, and the final outcome will likely not be known for several days. Photo: Joseph Sohm/Shutterstock

Ballot counting in the 2020 U.S. presidential election continued deep into the night, with no clear result apparent, and many British Columbians closely watching returns.

Neither candidate conceded, and U.S. President Donald Trump claimed victory in a speech that started at 11:30 Pacific Time.

"This is, without question, the latest news conference I've ever had," Trump said to start his speech, even though, in 2016, he started his victory speech closer to midnight Pacific Time.

"This is a fraud on the American public. This is an embarrassment to our country. We were getting ready to win this election. Frankly, we did win this election."
Democratic candidate Joe Biden sounded confident earlier in the evening.

“We feel good about where we are,” he said around 9:40 p.m. Pacific Time. “We really do. I’m here to tell you tonight we believe we’re on track to win this election. We knew because of the unprecedented early vote, and the mail-in vote, that it’s going to take a while. We're going to have to be patient, until the hard work of tallying votes is finished. And it ain't over until every vote is counted.”

Trump, earlier in the evening, said in a tweet that he thought the Democrats were trying to steal the election. Twitter added a disclaimer.

Part of the process

Simon Fraser University political science lecturer Stewart Prest told BIV late in the evening that having an unclear result on election night is part of the process and the way democracy works.

It could, however, be bad for democracy if the process is not followed as set out in law.

He said Trump supporters have shown eagerness to shut down ballot counting after election night.

“If they start to agitate for the closure to the counting, then that's a very uncomfortable place for democracy to be, so that’s a concern,” he said.

“We could see that. The fact that there is this contestation over how the ballot-counting process should happen in some states also creates uncertainty, and creates opportunities for people to call for an early end to what should be a fairly straight-forward process.”

Fears of unrest among disappointed or angry voters, whose candidate did not win, have prompted retailers, hoteliers and other business owners in towns across the U.S. to board up windows in case street unrest leads to looting.

Prest said any potential rioting in the U.S. may stem from residents having little trust in authorities – something that is not the case in Canada.

“There is an underlying trust in Canadian institutions that is not, necessarily, in the U.S. anymore,” he said.

How a Trump win would affect Canada-U.S. relations

He added that it is unlikely that Trump will change his leadership style, his approach to dealing with COVID-19, or his foreign policy fixation with China.

“If [Trump] loses, President Biden, I think, would bring a different set of priorities, clearly, to the White House,” Finlayson said.

“Whether he would have Congress behind him, especially the Senate, remains to be determined. So there are a lot of balls in the air at the moment.”

Finlayson doubts that Canada would reap an international-capital infusion if Trump wins, in part because Canada has a much smaller economy, but also because of what he called Canada’s uncompetitive tax system.

A Trump win, however, could continue to deteriorate the perception of the U.S. around the world that has been taking place for some time, he said.

“It's been going on for several years,” said Finlayson. “This chaotic kind of campaign – there’s the acrimony, and uncertainly that may flow out of it, but also [there’s] the mishandling of the virus, and the fact they're on the cusp of a quarter-million deaths from COVID-19, with potentially another couple hundred thousand before we get into this spring. All of that, I think, is going to severely hurt the reputation of the U.S. in the way it is perceived, almost regardless of who wins the presidential election.”

Keeping an eye on cannabis

One niche sector in B.C. that may stand to benefit regardless of the night’s result is the burgeoning legal cannabis industry, said longtime industry consultant, and Materia Ventures CEO Deepak Anand.

Were that to happen, B.C. producers such as Nanaimo-based Tilray Inc., could stand to benefit, Anand said.

Even if Trump wins, Canadian cannabis companies will benefit from the hop-scotching of states individually legalizing either recreational or medicinal cannabis use, he said.

Immigration flow may also be impacted by the U.S. election result.

Much talk arose in 2016, among Democrats, who said that they would move to Canada if Trump won. Folk singer David Crosby, for example, joked in a concert in Vancouver a couple of months before that election that the event was a ruse for him scouting Vancouver real estate.

Blaine Immigration principal Len Saunders, however, told BIV that he did not get a single client who asked him to help them facilitate their move to Canada following Trump’s win.

“Everyone said, ‘Oh, you know, if he gets elected, I’m going to leave,” Saunders said. “Nobody left. When the coronavirus got bad in June, it was literally a dozen calls a day from Americans wanting to go north.”

Americans are making that same pledge in 2020 – even those who support Trump.

Former Vancouver Canuck, Trump supporter and dual-citizen Todd Bertuzzi, told Sportsnet 650's morning show, the Starting Lineup on November 3 that, ”If I don't like who gets in, there's a good chance I'll be moving out to Vancouver.”