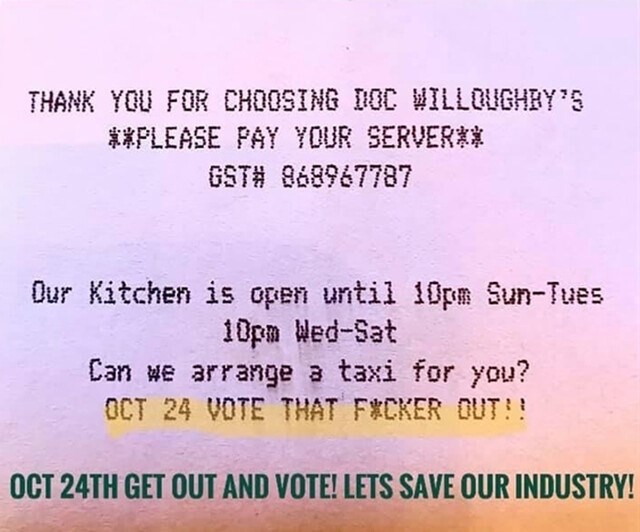 Calling it "a crass cry for help," the owner of Doc Willoughby's Pub in Kelowna says sometimes "you have to really shout to be heard."

Dave Willoughby recently added a political statement to his receipts asking for help to turf the current provincial government.

"Oct. 24th get out and vote! Let's save our industry!" reads the text overlay on an image of the receipt shared to social media.

The image has since been removed from the company's social media platforms.

In an interview with Castanet News, Willoughby, who holds a master's degree in public health, says he has two issues with Premier John Horgan and the NDP government.

Earlier this month, Willoughby circulated a letter sent to Horgan and Dr. Henry critical of the province's decision to cut off alcohol sales in pubs and restaurants at 10 p.m.

In part, it stated establishments can't absorb more losses in revenue at a time when they have spent "significant amounts to re-configure their operations and have been operating carefully and in compliance with the rules."

Willoughby says the 10 p.m. cutoff is "super hurtful to our industry."

"A lot of people don't come out to our business until 10 o'clock."

In a region with 15 per cent of the population and only three per cent of new cases, Willoughby believes the province should regionally target restrictions similar to what is now being done in Quebec where bars and restaurants in Quebec City and Montreal have been ordered to close due to a large spike in COVID-19 cases.

As for the message on the receipt, Willoughby says he has received support although he admits in the Central Okanagan he is likely just "preaching to the choir."

But, he adds, with an election campaign underway, nothing is happening, and nothing will happen for two months.

"They are just going to stick their head in the sand and try and get re-elected to get a majority so they can put policies they want in.

"Those policies really aren't going to be pro-business".