A brief history of the Zorro goal, aka. the lacrosse goal, aka. The Michigan

Nils Höglander seems destined to score a Zorro goal in the NHL, but where did the move come from?
Mar 2, 2021 4:01 PM By: Daniel Wagner 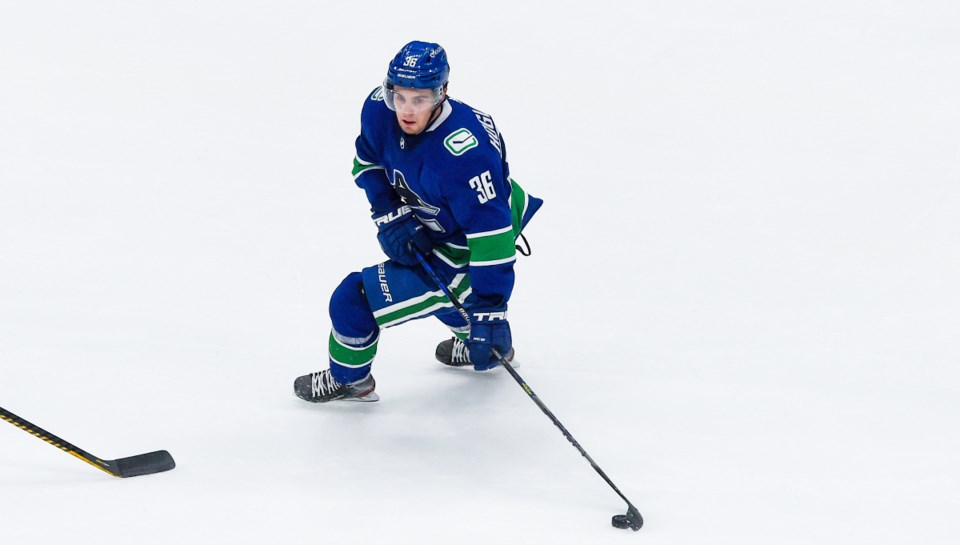 Nils Hoglander has scored Zorro goals in the SHL and the World Juniors — how long until he scores one in the NHL?Bob Kronbauer / Vancouver is Awesome

Midway through the second period of Monday’s 4-0 win over the Winnipeg Jets, Vancouver Canucks rookie Nils Höglander got the puck behind the net with minimal defensive pressure. He made a quick move with the puck, pulling it up on top of his blade as he maneuvered to the side of the net, but the puck rolled off his stick.

Canucks Twitter exploded. “Hoglander” was immediately trending in Vancouver, regrettably without the accent above the "o".

Why did a nothing play like that inspire such excitement? Because it was immediately apparent that Höglander was attempting one of the most exciting plays in hockey — the Zorro goal. In fact, it was almost lost that Höglander scored an actual goal on Monday, albeit in a much more mundane way: tipping a point shot.

But what is a Zorro goal and why did everyone get so excited? It’s time for a quick history lesson.

A goal by any other name would still look as sweet

Höglander called it a Zorro goal, as that’s its name in Sweden. Others know it as the “lacrosse goal,” while hockey fans in the United States are more likely to call it The Michigan. Hockey fans in North Carolina will try to convince you to call it The Svechnikov. Don’t let them.

The typical goal scored from behind the net is a wraparound, but the puck can only really go along the ice on a proper wraparound. That makes it relatively easy for today’s butterfly goaltenders, who can go post-to-post with ease, to make the save. The Zorro goal is the answer to the question, “What if a wraparound could go into the top corner?”

From behind the net, a player attempting a Zorro goal has to get the puck up onto the blade of his stick, where he can lift it up and control it like he was a lacrosse player with a ball in the pocket of his stick. From there, the player has to use centrifugal force to keep the puck on his stick while whipping it around the post and into the net.

When done properly, this move can be very unexpected — most goaltenders are used to sealing off the post on a wraparound attempt and leave space above their pad or shoulder.

Lifting the puck up onto your stick and controlling it like a lacrosse player is known as “Zorroing” the puck in some circles, as it involves a back-and-forth motion like Zorro carving a “Z” with his sword, hence “Zorro goal." Scoring a goal from behind the net with the puck on your blade is also a daring, swashbuckling move, so that also fits with the Zorro theme.

Most hockey fans would credit Mike Legg for creating the Zorro goal. The reason so many people know it as The Michigan is that Legg scored with the move in a crucial game for the University of Michigan.

Part of what made this such an iconic goal is the stakes at hand. It was the 1996 NCAA tournament and Michigan was down 2-1 to the University of Minnesota. The winner of the game would move on to the Frozen Four. For the players, this was the biggest game of their college careers thus far.

Players would fool around with Zorroing the puck in practice. It was just a trick, something you might do to impress your friends. No one ever did it during a game. For Legg to try it not just in a game but in this game took tremendous chutzpah.

“I don’t believe I saw what I think I just saw,” said the colour commentator in disbelief after Legg scored. And why should he? No one had ever seen someone score a goal like that before.

Well, almost no one.

Origins of a sweet move

The truth is, Legg learned the move from another player from his hometown of London, Ontario.

Bill Armstrong was a point-per-game player in the NHL: he played one game for the Philadelphia Flyers and tallied one assist. He may not have had a storied NHL career, but his legacy continues to be felt. He was the first player to score a Zorro goal in an actual competitive game.

In fact, he scored several.

While playing with the Albany River Rats in the AHL, Armstrong scored with the move four times, all before Legg found himself behind the net in the NCAA tournament.

“The fans there got to know it because they ran a piece on local television,” said Armstrong to ESPN back in 2010. “So I would get behind the net — maybe only 3,000 people are in the building —— and I'd hear the fans yelling, ‘Do it! Do it!’ We called the shot the ‘do it.’”

He kept scoring the “do it” goal when he moved to the IHL with the Orlando Solar Bears, though he started calling it the “high wrap.”

While training together in London, Legg saw Armstrong doing the move and had to know how to do it. After watching him from a distance, Legg finally worked up the nerve to ask him how he did it and the older Armstrong taught him the move.

That was 1993. It would still be three years before Legg tried it in a game. In that time, he worked on it whenever he had a spare moment, making sure he was confident enough with the move.

“Mike did that shot all day, every day,” said Marty Turco, then Michigan’s goaltender. “It was like the last thing he did before he got off the ice in warm-ups and practice.”

According to Legg — and most practitioners of the Zorro goal — it’s actually not that hard to do.

“You could probably do it by the end of the day if I showed you how. It just takes a few hours,” said Legg. “But to get so good at it that I could just do it any time I wanted, it took a real long time to get that confidence.”

The “do it” move didn’t become synonymous with Armstrong because he played in the minors to tiny crowds. Games frequently weren’t televised and there was no way to spread video of his goals.

Legg, however, scored in a televised game watched by hockey fans across the U.S. The goal made highlight reels on sports shows all over the world and the stick he used to score the goal was donated to the Hockey Hall of Fame.

Bringing the Zorro to the NHL

Since Legg’s iconic goal, hockey players around the world have grown up Zorroing the puck onto their sticks and doing all sorts of crazy moves. Whether they called it The Michigan, a lacrosse goal, or a Zorro goal, plenty of players have scored with the move in junior hockey, college hockey, or European leagues.

It took 23 years, however, for someone to score a Zorro goal in the NHL.

Why did it take so long? Perhaps it's because the move seems like showboating to the traditionalists that dominate decision-making positions in the NHL. Perhaps it's simply because finding the time and space to pull off the move is harder in the NHL than it is in the minors or NCAA.

Tyler Ennis was arguably the first to try it back in the 2016-17 season. Evgeny Kuznetsov attempted the move with the Washington Capitals in the 2017-18 season, but lost the puck off his stick at the last second. In the same month, Filip Forsberg tried with the Nashville Predators, hitting the post. His fellow Predator, Viktor Arvidsson, even tried it in the 2018 playoffs.

Multiple players tried to do it in the 2018-19 season, but didn’t succeed. It wasn’t until the 2019-20 season that someone successfully scored a Zorro goal in the NHL.

Andrei Svechnikov was the first to do it, tying the game like Legg for the Carolina Hurricanes against the Calgary Flames.

A couple of months later, Svechnikov did it again. Then, a month after that, Forsberg finally succeeded at scoring with the lacrosse, lifting up the puck and tucking it past Mike Smith in one smooth motion.

Suddenly, the Zorro goal was in the NHL. It took over two decades to arrive, but when it did there were three in one season.

Svechnikov and Forsberg demonstrated how players with soft hands can adeptly maneuver the puck onto the blade with smaller movements, making it possible to perform with NHL-caliber defenceman bearing down on you.

There’s another player who can pick the puck up onto his stick at incredible speed to score Zorro goals: Nils Höglander.

Höglander has made a habit of scoring incredible Zorro goals prior to coming to the NHL. He won back-to-back Goal of the Year awards in the SHL with the move and even pulled it off in the 2020 World Junior Championships against Sweden’s bitter rival, Finland.

He first scored with the move in the SHL at the age of 18 and got a crosscheck from a defenceman for his trouble. That takes remarkable confidence.

Höglander uses the traditional method of getting the puck up onto his stick in all three goals, but does it at incredible speed compared to Armstrong and Legg, and pulls it off under pressure as well. At other times in the SHL, he showed that he can get the puck onto his stick for Zorro moves in other ways, like he tried on Monday night.

It might seem like a flashy move — and it is — but for Höglander it’s just another tool in his skillset, available to use if the time is right. It’s important to note, when he tried the move on Monday, he never lost possession of the puck. When it rolled off his stick, he just collected it and made the safe pass to the point to keep the play going.

It seems like it’s only a matter of time before Höglander finds himself alone behind the net again and gives it another try.