The pressure is on Demko to pick up where Markstrom left off as the Canucks push for the playoffs.
Lachlan Irvine Feb 25, 2020 1:10 PM

The NHL Trade Deadline has come and gone, and even after the Canucks made an attempt to solidify their lineup with the acquisition of Tyler Toffoli last week, one massive problem reared its head just before the clock struck high noon.

Yesterday the team announced that Jacob Markstrom will be out of the lineup with a lower-body-injury that’s expected to keep him out of the net for around 3-4 weeks. The injury led the Canucks to acquire perennial backup Louis Domingue from the New Jersey Devils in exchange for Comets goalie Zane McIntyre in the waning minutes of deadline day.

With their team MVP potentially out for the entire March postseason push, the Canucks will need rely on young Thatcher Demko to not only take over the starting netminder role in Markstrom’s absence, but also help them clinch their first playoff spot since 2015.

The 24 year-old Demko has already made some big strides this season. He’s played a career high 20 games in 2019-20 and posted a decent record of 10-6-2 in the process, but his .905 save percentage does leave room for improvement. Now he’ll have a chance to boost those numbers with an extended run as the Canucks’ number one goalie.

It’s no secret that Demko’s greatest skill is his athleticism. While his 6-foot-4, 192 pound frame makes him one of the lankier netminders in the league, his lightning quick reflexes are more reminiscent of a smaller goalie.

When an opponent has a puck outside the high danger zones of the ice, Demko will use his size to play just behind the top of the crease so he can cover as much net as possible while giving himself extra reaction time to far shots. As the puck enters the high danger area, he’ll crouch into a deeper stance and adjust his distance from the net based on the area they’re shooting from. 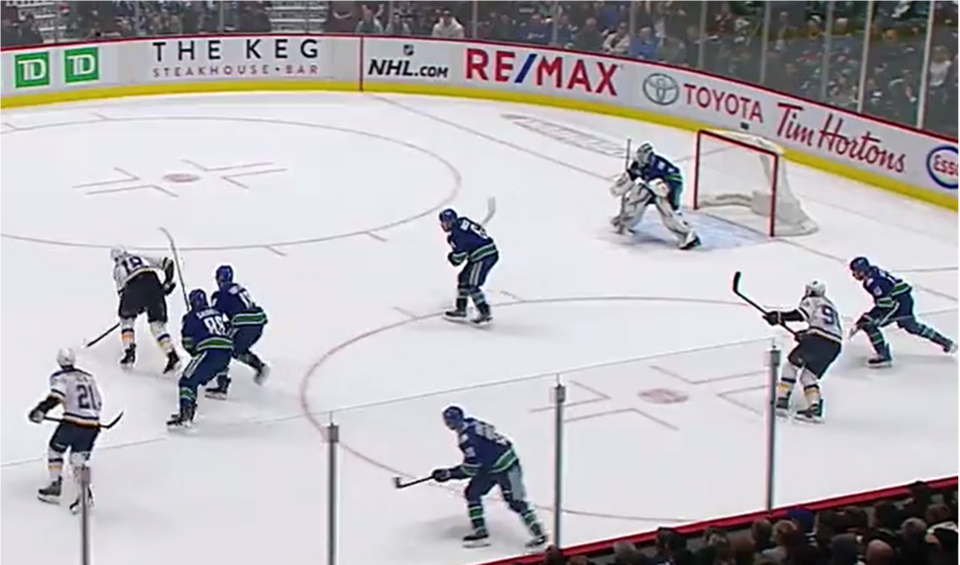 Take this shot from against the Blues, for example. As Jay Bowmeester corrals the puck near the high slot Demko elects to challenge closer to the top of the crease. But at the same time he lowers his chest into a deeper angle: that way he can still cover the top of the net with his body and arms for high shots and quickly drop into a butterfly if Bowmeester’s shot stays low to the ice.

Compare that to shots from the high corners, where Demko uses the sharper angles to his advantage by either lowering his stance even closer to the ice to cut off more low shooting spaces or by immediately dropping into a butterfly and using his quick lateral movements to adjust if the puck carrier passes.

Demko’s speed with lateral movements is on full display when he’s moving in between the posts. Like the vast majority of goalies raised in the current era, Demko uses the hybrid method of post coverage that was popularized in the early 2010s by goalies like Jonathan Quick and Tuukka Rask.

As the video above illustrates, when the puck is in the corner Demko will position himself with his chest and the foot of his pad flush to the post to cover as much space on the short side as possible. His inside arm will be positioned in front of the post to cover any remaining holes, and his outside leg will be up at a slight angle to provide extra stability and pressure if he needs to push across to the opposite side.

There’s no room for a tight-angle shot to sneak through Demko, but he’s also in a good position to quickly push to the top of his crease to challenge the shot attempt from the top of the faceoff circle.

Due to his lack of NHL experience, Demko still has a ways to go when it comes to perfecting his game. His rebound control has cost him a goal or two this season, and it’s not uncommon for him to over commit on shot attempts, putting himself out of position if there’s a rebound or pass back.

If he’s having an off night, Demko’s reaction speed takes a dip and he’ll start to rely more on desperation saves, like this goal from his last start against Anaheim.

But the foundations of his game are quite strong, and even with a small sample size of work there’s plenty to like. According to Evolving-Hockey’s stats website, Demko’s 56 goals against this season is just slightly above his expected goals against of 55.35, so he’s been about a league-average goaltender.

According to Natural Stat Trick, the average distance of the goals Demko has allowed is 18.45 ft away from the net, two feet less than Jacob Markstrom’s equally nice average of 20.69 feet. In order to beat Demko, teams have had to get close to the net.

That’s something the Canucks should keep in mind: while every team endeavours to keep shots to the outside with their defensive structure, it’s particularly important for Demko. He doesn’t get beat much by shots from distance.

There’s clearly room for improvement for Demko on the statsheets. But as his confidence and skills develop under the watchful eye of Canucks goalie coach Ian Clark, those numbers will likely continue to get better as his workload goes up.

Demko has been waiting for a chance to prove he can become an NHL caliber No.1 goalie for the last three seasons, and that chance finally begins tonight when he starts in Montreal against the Canadiens. Talk about an intimidating first building.

For the first time in his professional career, Demko is in complete control of his own destiny. With Markstrom hurt, the Canucks clinging onto the Pacific’s third playoff spot and just 21 games remaining on the schedule, the pressure is on the San Diego native to pick up where his Swedish counterpart left off and help Vancouver clinch its first playoff berth in five seasons.

If that wasn’t enough, this stretch could easily determine the future of Demko’s career in Vancouver. Markstrom is expected to hit the free agent market on July 1, but if things go sideways for Demko and the Canucks over the next few weeks and it costs them a postseason berth, it’ll likely convince Jim Benning that locking up Markstrom to a long-term extension should be at the top of his offseason priorities.

But if the younger goalie is able to succeed and backstop the Canucks to the playoffs, it could convince management that Markstrom is expendable and solidify Demko as the team’s number one netminder during the prime years of Vancouver’s Cup window.

Regardless of where he’s at in his development or what side people are on in this latest Canucks goalie debate, one thing is certain; the fate of this team is now firmly in Thatcher Demko’s hands. The incoming Domingue will certainly get a start or two down the stretch, but this team will live and die by how they support their young goalie.

Demko has all the tools to lead a team to the promised land of playoff hockey. But if he can put them all together in the next few weeks, he just might earn the opportunity to keep doing so in Vancouver for many seasons to come.