Jacob Markstrom is following in the footsteps of some of the greatest Canucks goalies of all time: Roberto Luongo, Kirk McLean, Gary Smith and, of course, the legendary John Garrett.
Lachlan Irvine Jan 24, 2020 9:45 AM

When Jacob Markstrom makes his debut as an NHL All-Star during Friday night’s Skills competition in St. Louis, he’ll be following in the footsteps of some of the greatest Canucks goalies of all time: Roberto Luongo, Kirk McLean, Gary Smith and, of course, the legendary John Garrett.

While Markstrom may have gotten his invite to All-Star Weekend after Marc-Andre Fleury of the Vegas Golden Knights elected to skip the festivities, it should be said that he deserved the All-Star nod. Markstrom’s 18 wins put him just one victory behind the Pacific leaders, Fleury and David Rittich of the Calgary Flames, while his .916 save percentage is second only to Darcy Kuemper (.929) of the Arizona Coyotes among starting goalies in the division.

The 29 year-old’s rise from a human mystery box into one of the NHL’s top netminders has been one of the best stories over the last three seasons in Vancouver, and a huge reason the Canucks are heading into the All-Star break with the Pacific Division lead. Markstrom’s efforts in 2018-19 was enough to earn him Team MVP honours in a fan vote, and this year he’s arguably exceeded his success from last year.

The most noticeable change to Markstrom’s training regiment has been the man running it. Goaltending coach Ian Clark was brought on board by the Canucks last season after spending the previous eight years working with Sergei Bobrovsky in Columbus. With Clark’s guidance, Markstrom has made a number of changes to his overall game that’s helped turn him into an NHL All-Star.

In the late Jason Botchford’s final article for The Athletic detailing Markstrom and Clark’s relationship, Botchford mentioned that among the bigger changes the Canucks goalie coach made last season was to Markstrom’s pad and glove positioning.

Clark changed Markstrom’s stance and set up to be more narrow with his feet and to have his hands up higher. He did the same with Bobrovsky after he got to Columbus and before he won two Vezina Trophies. The changes have allowed his goalies to track pucks better.

“If you’re going to spread your legs out and they are, for lack of a better phrase, not underneath you, then you have no mobility,” Clark said. “It’s a fine way to make one save but that’s no way to prepare for the moment because you’ve lost your mobility. You’re spread out like a tripod, and if you take one leg of a tripod off, you can’t go anywhere.”

Let’s go to the tape, shall we? 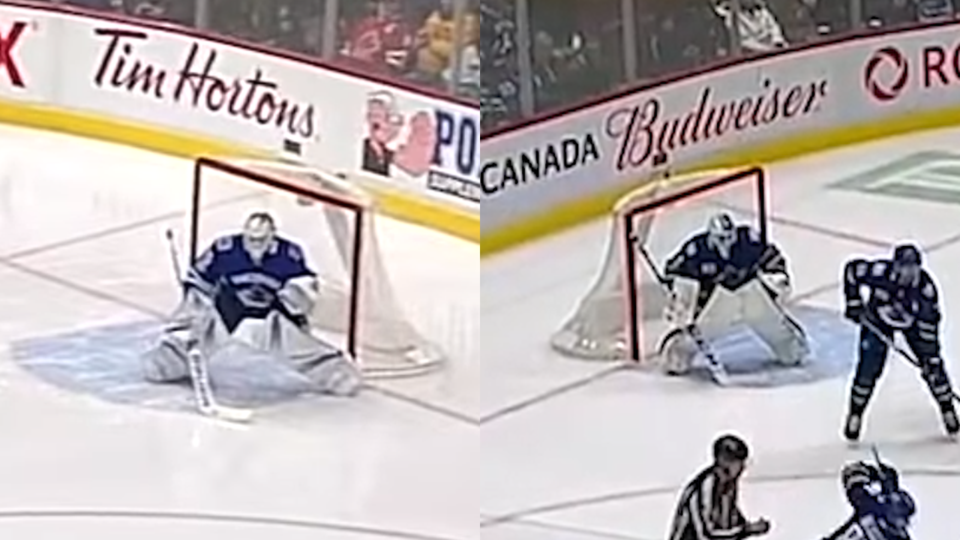 The screenshot on the left is from a November 2017 game against Pittsburgh, while the shot on the right is from his most recent appearance against Arizona. In his first year as the Canucks starter, Markstrom played with his legs in a much wider stance, leaving him more time to react to low, off centre shots.

But, as Clark mentioned, this left Markstrom with little to no power to push off in the case of a rebound or redirection. It also left a wider five-hole, giving shooters a better scoring opportunity around the slot.

Compare that to his last game against the Coyotes, where Markstrom uses a taller stance to square up to the faceoff. Notice how his pads now cross in front of one another at the top instead of leaving a gap between them. Not only does this give him the power he needs to push across the net, but also reveals fewer holes for any potential shooter.

Being a six-foot-six goalie can have its disadvantages at times. The lankier and bulkier a goaltender is, the tougher it is to maintain the more athletic parts of the game, like reaction speed and position control. Prior to Clark’s hiring, Markstrom struggled mightily with both.

In his first season as a starter, Markstrom’s confidence in his save selections was a work in progress. When a goalie is playing at their best, the save selections they make are essentially instinctive. If their confidence isn’t fully there, you’ll notice them start to overthink their choices and rely on frantic saves more routinely.

In year one with the Canucks, Markstrom allowed a larger number of goals against where he was unable to fully corral a shot or got beaten cleanly by long deflected shots after being unable to recorrect. Nowadays, Markstrom’s ability to read and adapt to the play has never been stronger. According to Natural StatTrick, his average goal distance has dropped from 25.42 feet away in 2017-18 to 20.74 feet this year. He doesn’t get beaten from distance like he used to.

Markstrom’s play in the third period against the Rangers a few weeks ago is living proof of how instinctive his save selection has become. There's no overthinking, just reading and reacting. He still has some work to do in the rebound control department, but Markstrom has effectively increased his save reaction time and it's made his aggressive style of play all the more difficult for opponents to beat.

Under Clark’s watch Markstrom has become a much more confident and compact goaltender, with huge improvements in his ability to track shots. That fact is cemented by this handy shots map from Charting Hockey’s Sean Tierney. 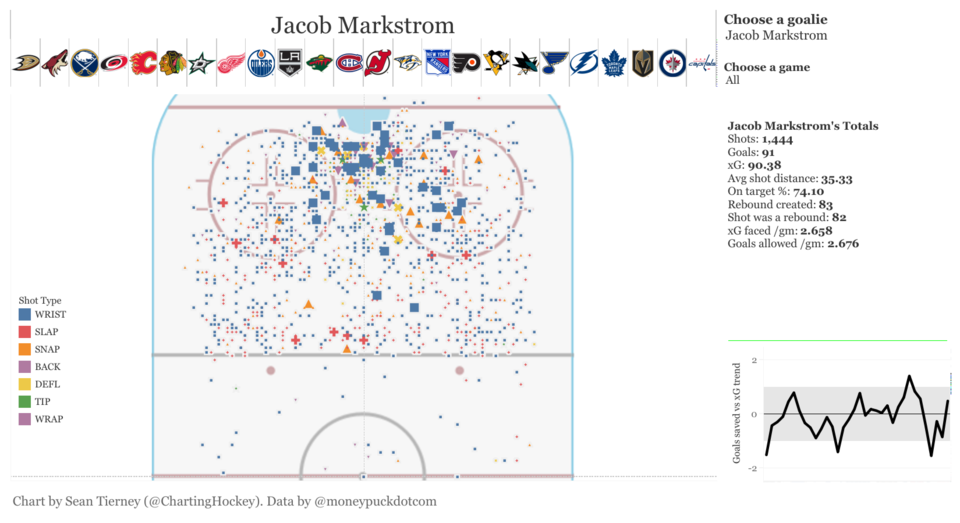 What this map shows us is where goals have come from against Markstrom. It tells us that Markstrom still needs some improvement with shots from the right side of the high slot (his left), but the amount of shots from distance getting by him is low. If opponents want to put the puck past Markstrom, they need to push their way to the front of the net, and if you’re Travis Green that’s exactly what you want from your goalie.

I could easily write a whole other article on the importance of managing Markstrom’s workload, but for now let’s keep things simple.

Markstrom’s 34 starts are the tenth most in the league, and accounts for a very nice 69.3% of the Canucks’ 49 games so far. At that rate, Markstrom will finish the season with around 57 starts in 2019-20, and while that number is lower than his career high 60 starts last season, it’s still a slightly heavier workload than one should be playing in today’s game.

With a potential playoff run on the horizon and a more than capable Thatcher Demko waiting in the wings, the Canucks should try to shave a few extra games off Markstrom’s total in the coming months in an effort to keep him fresh for the postseason and beyond. Long-term burnout can drastically affect a goalie’s play and mentality, and it’s up to the Canucks to make sure they don’t create the next “Cam Talbot situation.”

Talbot started 73 games in the 2016-17 season for the Edmonton Oilers, then 67 games in the 2017-18 season. He crashed and burned the following season, posting an .892 save percentage and got traded to the Philadelphia Flyers. Avoiding that type of future for Markstrom is key, particularly in a contract year.

This weekend in St. Louis might be Markstrom’s coming out party on a league-wide scale, but it could also end up being one of his final big moments as a Canuck, with his contract set to expire on July 1. Whether the Canucks elect to re-sign Markstrom or officially hand the keys to the kingdom over to Thatcher Demko, his success story in Vancouver isn’t a common one in the Canucks’ 49-season history, even among the team’s past All-Star representatives.

Luongo and Smith both honed their skills on previous teams before hitting their peak in Vancouver, and Garrett was an injury replacement for Richard Brodeur in the 1983 game who was nearing the end of his pro career. Only Kirk McLean has a comparable career path to Markstrom’s: he was acquired by the Canucks as a prospect and developing through the club’s system into a franchise cornerstone.

If this season ends up being the curtain call for Markstrom’s Canucks tenure, it’s one worth celebrating as he steps into the spotlight at the Enterprise Center during Friday’s Skills competition and Saturday’s 3-on-3 tournament. If he keeps playing like the All-Star he’s become, Markstrom just might lead his team to a thrilling playoff encore in April.