Jacob Markstrom is bringing back the two-pad stack

Canucks goaltender is 6'6" with impeccable technique, but that doesn't keep him from improvising with some incredible athleticism.
0
Jan 30, 2020 2:45 PM By: Daniel Wagner 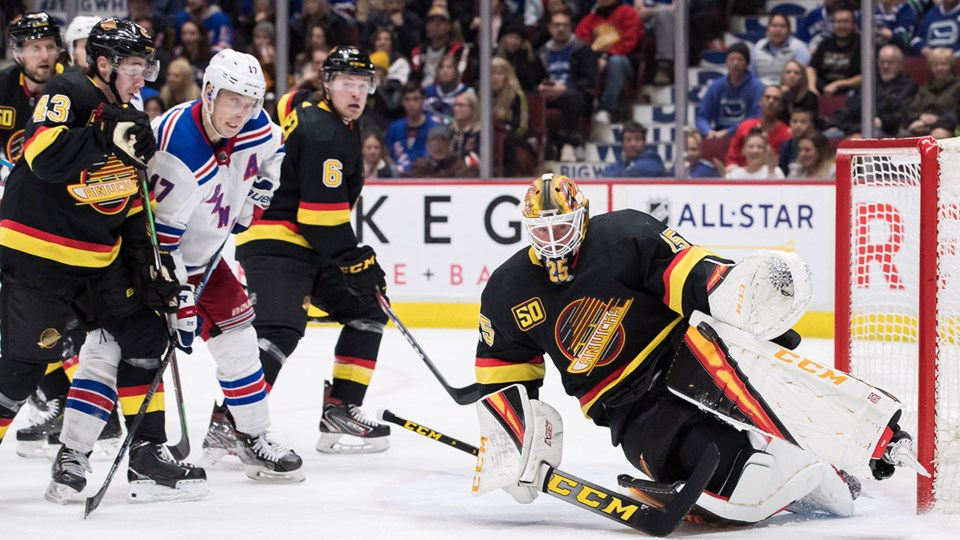 Jacob Markstrom stacks the pad for a save against the New York Rangers. photo: Darryl Dyck / CP

The two-pad stack is incredibly nostalgic for hockey fans that grew up in the 80’s and 90’s. This is doubly true for Canucks fans: the most famous save in franchise history — literally called “The Save” — was the two-pad stack by Kirk McLean on Robert Reichel of the Calgary Flames in overtime of Game 7 in the first round of the 1994 playoffs.

It’s a save you don’t see very often in the modern NHL, but there’s one goaltender who seems intent on bringing it back this season: Jacob Markstrom.

There was a time when a goaltender in hockey didn’t think much about what happened after they made a save. Jim Corsi, currently the goaltending coach for the Columbus Blue Jackets, once interviewed for a job with Jacques Lemaire and the New Jersey Devils, and tried to explain his more progressive philosophy of goaltending. Lemaire didn’t care.

“Make the first save and then we’ll take care of the rebound,” Corsi remembers Lemaire telling him.

That’s how the position worked for a long time. A goaltender’s goal was simple: make the first save. Anything that happened after that was the responsibility of the skaters in front of him.

Goaltenders would charge out from their net to cut off the angle, paying no heed to how ludicrously out of position they might be for a potential rebound. They would dive and slide across the net, desperate to make that first save, with little regard to making the second.

That’s where the two-pad stack comes in. It’s a save selection that leaves a goaltender completely on his side, a position that doesn’t lend itself to quickly getting back up. It’s a move designed to make the first save, not the second.

That’s why you rarely see the save these days. Modern goaltending still requires exceptional athleticism, but so much of the position is about efficiency of movement and making save selections that leave you well-positioned to make the second, third, and fourth save if necessary. A save like the two-pad stack is the type of desperation move that most of the time isn’t necessary if a goaltender is in the right position, tracks the puck well,

It’s also an incredibly fun save to watch and the ideal save for kids in road hockey pads in their driveway, trying to emulate Curtis Joseph, Eddie Belfour, or Dominik Hasek.

Perhaps Jacob Markstrom didn’t grow up watching those same goaltenders in Sweden, but whoever he watched, he saw plenty of two-pad stacks. Perhaps before he became the disciplined goaltender with great technique that he is today, he was also throwing up the pad stacker in the driveway with his friends, because he’s turned to the two-pad stack several times this season.

He busted it out early in the season, resorting to the two-pad stack to clinch a shootout win over the Philadelphia Flyers. It wasn’t quite a desperation save, but he did have little choice after he missed the pokecheck on Kevin Hayes.

In the shootout, of course, the first save is all you have to make. There are no rebounds, so if the situation calls for a save from which you can’t recover to make a second save, who cares? It means a little more when a goaltenders busts out the stack outside of the shootout.

Markstrom did exactly that on 90’s Night in Vancouver, making a fantastic save on Jacob Trouba that immediately made everyone think of McLean, who was in the building for the game to boot.

“I watched hockey growing up,” said Markstrom of his pad-stack save on Trouba. “It would happen more often than not back then.

“Games aren’t perfect and sometimes you’ve just got to be athletic. It’s about stopping the puck. It’s not textbook and how I really wanted it, but I stopped the puck and that’s the main part.”

For Markstrom, all that matters is stopping the puck. He’s not looking for style points or to entertain the crowd: he just wants to keep the puck out of the net by hook or by crook. Ordinarily that means using the excellent technique he’s honed to near-perfection with Canucks goaltending coach Ian Clark. Sometimes, however, you have to improvise and that’s meant pulling inspiration from goaltenders of the past and throwing up both pads.

The best example came Wednesday night against the San Jose Sharks, when Markstrom faced a 2-on-1 and pulled off a spectacular save that took the two-pad stack into a more Hasek-ian direction. Just call him Willie Sutton, because he robbed Labanc.

“2-on-1, pass it really early, I kind of figured he was going to shoot it really quick,” said Markstrom to reporters in San Jose. “Finding a way to keep it out of the net and fortunately enough it hit my pad. It was good: they didn’t score, so that’s the positive thing about that.”

Again, Markstrom is entirely focused on keeping the puck out and nothing more. As spectacular as that save was, Markstrom wasn’t showboating: it was just the right save to make at the right time.

Just because he’s not trying to entertain the crowd doesn’t mean we aren’t allowed to be entertained, of course.

These are not necessarily desperation saves where Markstrom is abandoning technique because he’s made a mistake and he’s trying to recover. He’s making a conscious choice to use a different technique because it’s the right move to make the save. In both of the above two examples, Markstrom makes the two-pad stack at the right time to make the first save and avoid the necessity of the second.

Against Trouba, Markstrom simply doesn’t leave a rebound, tracking the shot into his body and immediately covering up. Against Labanc, Markstrom ends up on his back, facing completely the wrong way after the save, but the rush situation and skaters backchecking limited the risk of a rebound chance.

The fact that Markstrom is adding this improvisational athleticism to his already-sound technique is a great sign for the Canucks as they push for the playoffs. It’s the next step to becoming even-more unbeatable.

Jacob Markstrom to replace Marc-Andre Fleury at 2020 NHL All-Star Game
Jan 3, 2020 7:50 AM
Comments
We welcome your feedback and encourage you to share your thoughts on this story. We ask that you be respectful of others and their points of view, refrain from personal attacks and stay on topic. To learn about our commenting policies and how we moderate, please read our Community Guidelines.