What went wrong — and right — with the Canucks’ penalty kill last season?

One of the odder statistics from the Vancouver Canucks’ 2021-22 season is that they were one of the best teams in the league when it came to goals allowed at 5-on-5.

The Canucks allowed just 143 goals against at 5-on-5 — only the Calgary Flames and Carolina Hurricanes allowed fewer. A big part of that was their goaltending. The save percentage of their goaltenders — mostly Thatcher Demko — was a league-best .930 at 5-on-5. The next best team was the New York Rangers at .926.

For most teams, that type of defensive — or goaltending — performance at 5-on-5 would be enough to get them into the playoffs. Even though the Canucks didn’t score a ton at 5-on-5 — they were 24th in the league with 156 goals — they still had a positive goal differential.

Of the 17 teams with a positive goal differential at 5-on-5, just two missed the playoffs — the Canucks and the Vegas Golden Knights.

The Canucks' penalty kill finished 30th in the NHL

There are many reasons why the Canucks’ positive play at 5-on-5 didn’t result in a playoff spot, such as all the situations that occur in a game going 8-12 in overtime and the shootout and a tendency to drop other one-goal games. But the biggest reason might have been their penalty kill.

Both sides of the Canucks’ special teams struggled early in the season but the power play recovered to the point that it finished in the top 10 in the NHL in both goals and power play percentage. On the other hand, while the penalty kill improved, it never really got good and still finished the season at 74.9% — 30th in the NHL.

The penalty kill was improving slightly when new head coach Bruce Boudreau and assistant coach Scott Walker took over, but the coaching change made those improvements even more dramatic. The Canucks’ penalty kill was lights out in December but it was somewhat shortlived, hitting another string of struggles in mid-January before rebounding again. 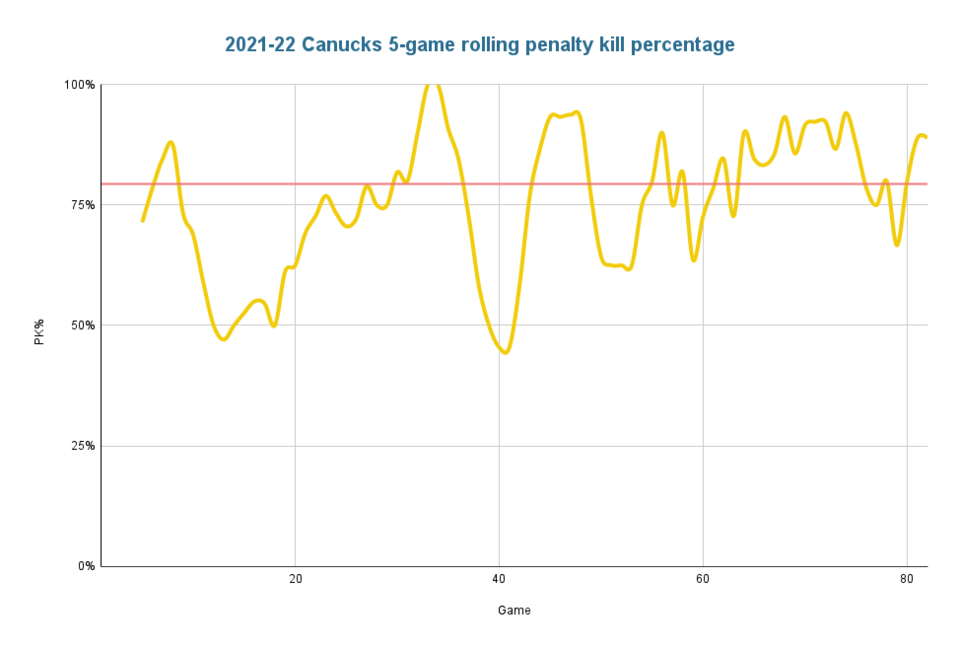 All-in-all, the Canucks penalty kill was 80.5% after the coaching change, which is slightly above the league average of 79.4%. That’s an improvement from how historically bad it was for the first quarter of the season but there’s clearly room for improvement.

Boudreau and Walker instituted some changes to the penalty killing system, largely involving a more aggressive approach on the forecheck and in the neutral zone. In-zone defence, however, was largely unchanged, with the team still playing the wedge+1 formation that has become standard in the NHL.

Beyond the systems adjustments, however, was the change in personnel. 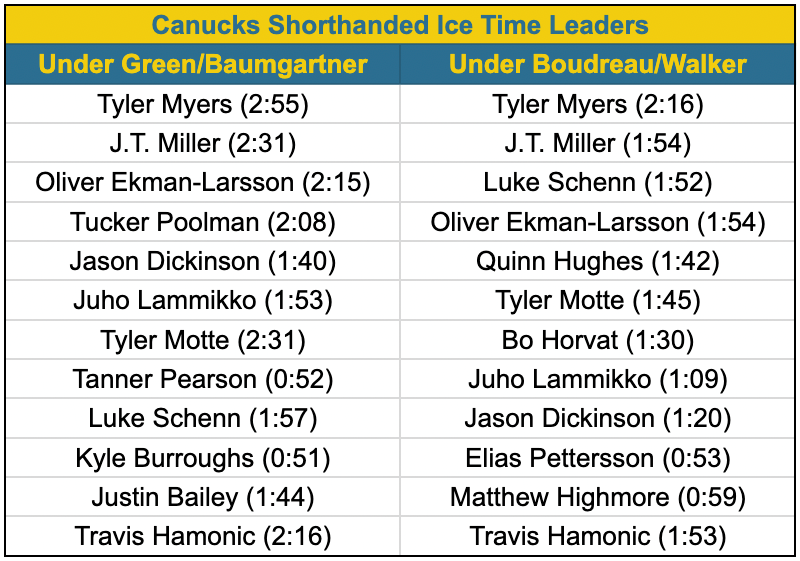 The table above shows the Canucks’ leaders in total ice time on the penalty kill, with their per-game average in brackets.

After the coaching change, Tyler Myers and J.T. Miller were still the team leaders in shorthanded ice time, with Oliver Ekman-Larsson not far behind, but they played much less per game. That was partly because the team managed to take fewer penalties but also because those minutes were spread more evenly.

There were two more significant changes. One is that Luke Schenn was in the lineup with more regularity so became one of the team’s leaders on the penalty kill. The other is the addition of Quinn Hughes, Bo Horvat, and Elias Pettersson to the penalty kill rotation.

The Canucks this past season, however, didn’t have the best penalty killers available in their bottom six. Part of this was the unexpected absence of Brandon Sutter due to long COVID and Tyler Motte missing time recovering from neck surgery but the team also traded Jay Beagle and Antoine Roussel and also lost two of their primary penalty-killing defencemen from last season, Alex Edler and Nate Schmidt.

As Green said in his final press conference about whether he had the personnel available to put together a strong penalty kill, “Well, it’s what we have here.”

Boudreau and Walker instead gave penalty-killing roles to offensively-minded players like Hughes and Pettersson and gave Horvat, who had struggled on the penalty kill in the past, another chance.

Pettersson and Hughes thrived on the penalty kill

It paid off. Here are the Canucks’ top penalty killers by the rate of goals against, along with their rate of unblocked shots against (Fenwick). 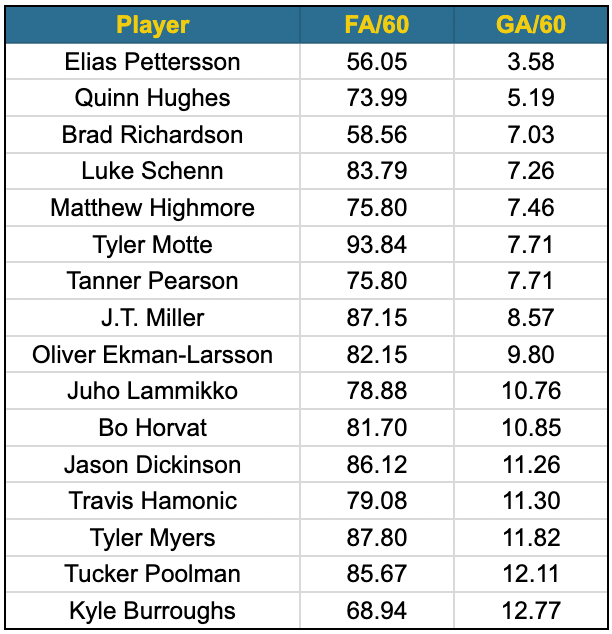 Hughes was nearly as good while playing significantly more minutes. In over 92 minutes, he was on the ice for just 8 power play goals against and the Canucks scored 4 shorthanded goals while he was on the ice.

“He sees the ice well — he sees it from the flip side too, which I think is important. Being a power play guy, sometimes you see the kill a little bit differently,” said Tyler Motte about Pettersson. “And any time you can get offence, especially on the PK, it’s huge for the group.”

A big reason Pettersson worked so well on the penalty kill was his ability to read passing lanes in the neutral zone and prevent clean zone entries. Even as there was a learning curve for positioning in zone, his hockey IQ and quick stick served him well.

I particularly like this next chart. Above, I showed a chart of the Canucks’ penalty killing percentage over the course of the season. Here’s that same chart with Pettersson’s shorthanded ice time, expressed as a percentage of available ice time. 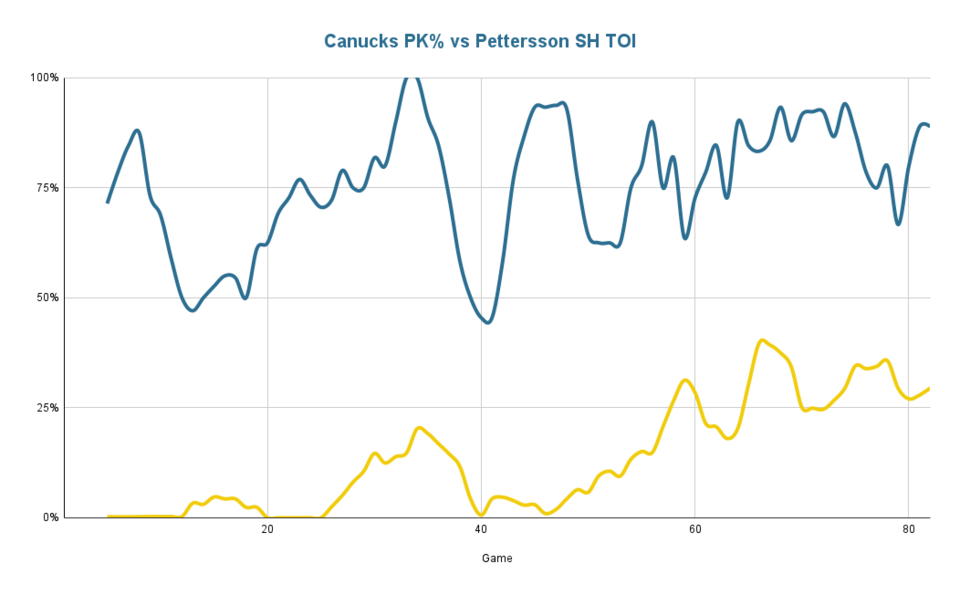 It’s not a perfect match, but there’s at least some correlation there. Generally speaking, the more ice time Pettersson received, the better the penalty kill got.

Hughes’ success on the penalty kill might be even more impressive, given that he played far more minutes. He was used as the second pairing on the penalty kill with Luke Schenn and his ability to win races to loose pucks with his skating then elude pressure and move the puck out of the zone was a significant boon.

Hughes and Pettersson both wanted to be used on the penalty kill and Boudreau was willing to give them that opportunity.

“When guys say they want to try it, give me a shot at it, you put the onus on them,” said Boudreau. “They go out and they do it…so they’re gonna get more opportunities to do it.”

Canucks need to reduce Myers' role on the penalty kill

A couple of other moves helped the penalty kill succeed as the season progressed. Poolman, Burroughs, and Hamonic, three of the team’s worst penalty killers in terms of goals against, got less ice time on the penalty kill after the coaching change, though that was due to a variety of factors. Poolman was injured, then experienced migraine headaches that kept him out of the lineup. Hamonic got traded.

Burroughs was arguably unlucky on the penalty kill, given his low rate of unblocked shots against, but when he was on the ice for the highest rate of goals against on the team, it’s hard to argue with some reduced ice time.

What the Canucks could use next season, however, is someone to replace Myers’ minutes on the penalty kill. The rangy defenceman led the Canucks in shorthanded ice time but was on the ice for the second-highest rate of goals against both before and after the coaching change.

Myers seems severely miscast as a shutdown defenceman. Getting another right-handed defenceman to play those minutes should be a priority for Canucks management, though that’s easier said than done.