At the All-Star break, the Canucks still face long odds of making playoffs

But the Canucks' odds are also not zero.

For a fleeting instant at the end of January, the Vancouver Canucks were agonizingly close to being in playoff position. After beating the Chicago Blackhawks 3-1 on January 31, the Canucks had 46 points, just two points behind the Calgary Flames for the final wild card spot in the Western Conference.

Two months earlier, that would have seemed impossible but the Canucks have seemed like a different team under Bruce Boudreau.

In the space of a few days, however, things changed. Heading into the All-Star break, the Canucks are now six points out of a playoff position. All it took was for the Canucks to lose one game and the Calgary Flames, currently in the second wild card spot, to win two.

That’s the primary problem for the Canucks: they’ve played more games than most of their competition in the Western Conference. The Flames still have four games in hand on the Canucks, making them incredibly difficult to catch in the playoff race. Even if the Flames falter, however, the Edmonton Oilers, Dallas Stars, and Winnipeg Jets also have games in hand, giving them an advantage over the Canucks.

Even as the Canucks have turned things around under Boudreau, other teams in the West have kept pace with them, resulting in the Canucks barely gaining ground.

That said, the Canucks can still make the playoffs, but the odds are low.

The Canucks' playoff chances are not great

Looking at four independent sites that publish playoff odds for the NHL, the Canucks have approximately a 1-in-10 chance at making the playoffs.

MoneyPuck gives the Canucks the best odds at 13% — not great but ahead of the San Jose Sharks, who are currently two points ahead of the Canucks in the standings. That may be because MoneyPuck’s model for predicting results weighs recent results more heavily than other models, so giving more credence to the Canucks under Boudreau.

The second-highest odds come from HockeyViz, where they land at 11.1%, also just a hair ahead of the Sharks. 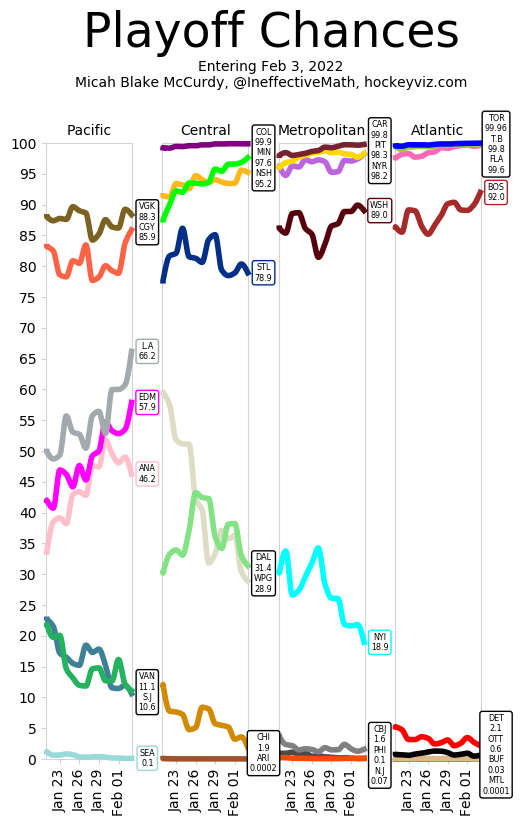 Again, the issue is that 11 teams ahead of them in the West have better odds. The Canucks are not in control of their own destiny at this point; they need four other teams to crash and burn.

Hockey Reference’s model sees the Canucks finishing the season with 86.2 points, with a 9.0% chance of making the playoffs, putting them just behind the Sharks.

Finally, there’s Dom Luszczyszyn’s model at The Athletic, which has the dimmest view of the Canucks’ playoff chances at just 8%.

8% is not 0%, however, and the Canucks’ odds were a lot longer a couple of months ago. Just before the coaching change, the Canucks’ playoff odds according to Luszczyszyn were just 1%.

Can the Canucks do it? Let’s take a quick look at why it would be a major challenge but it's not out of the question.

No seriously, the Canucks have a chance

The Canucks currently have a .500 record — 20-20-6 — which puts them 13th in the Western Conference, ahead of just the Chicago Blackhawks, Seattle Kraken, and Arizona Coyotes. That’s a pace of exactly 82 points over an 82-game season.

The last time 82 points was enough to make the playoffs, “No Scrubs” by TLC was on top of the charts. That was way back in 1999 before the invention of the “loser point” for losing in overtime or the shootout and both the San Jose Sharks and Edmonton Oilers snuck into the playoffs with sub-.500 records.

That’s not going to happen this season. HockeyViz and Luszczyszyn project 93 points as the playoff bar in the West, while Hockey Reference says 94 points. That sounds about right.

The Canucks, however, have been on a different pace since their coaching change. They are currently 12-5-4 under Bruce Boudreau, picking up 28 of a possible 42 points. Over the course of a full 82-game season, that’s a pace of 109 points, which would be the third-best season in Canucks history.

Now, that’s from a small sample size and should be taken with a grain of salt — this team doesn’t belong in the same conversation as the 2010-11 and 2011-12 Canucks — but let’s extrapolate for this season.

The Canucks have 36 games remaining. If they play at the exact same pace as the last 21 games, they would earn 48 points in those 36 games. Add that to the 46 points they already have and that comes out to 94 points.

Yes, that’s 94 points, just above or right at the projected playoff bar.

If you’re still holding out hope that the Canucks can make the playoffs this season, there’s your beacon of light in the darkness.

Luke Schenn and Quinn Hughes are both reaping the benefits of their pairing
Feb 1, 2022 4:19 PM